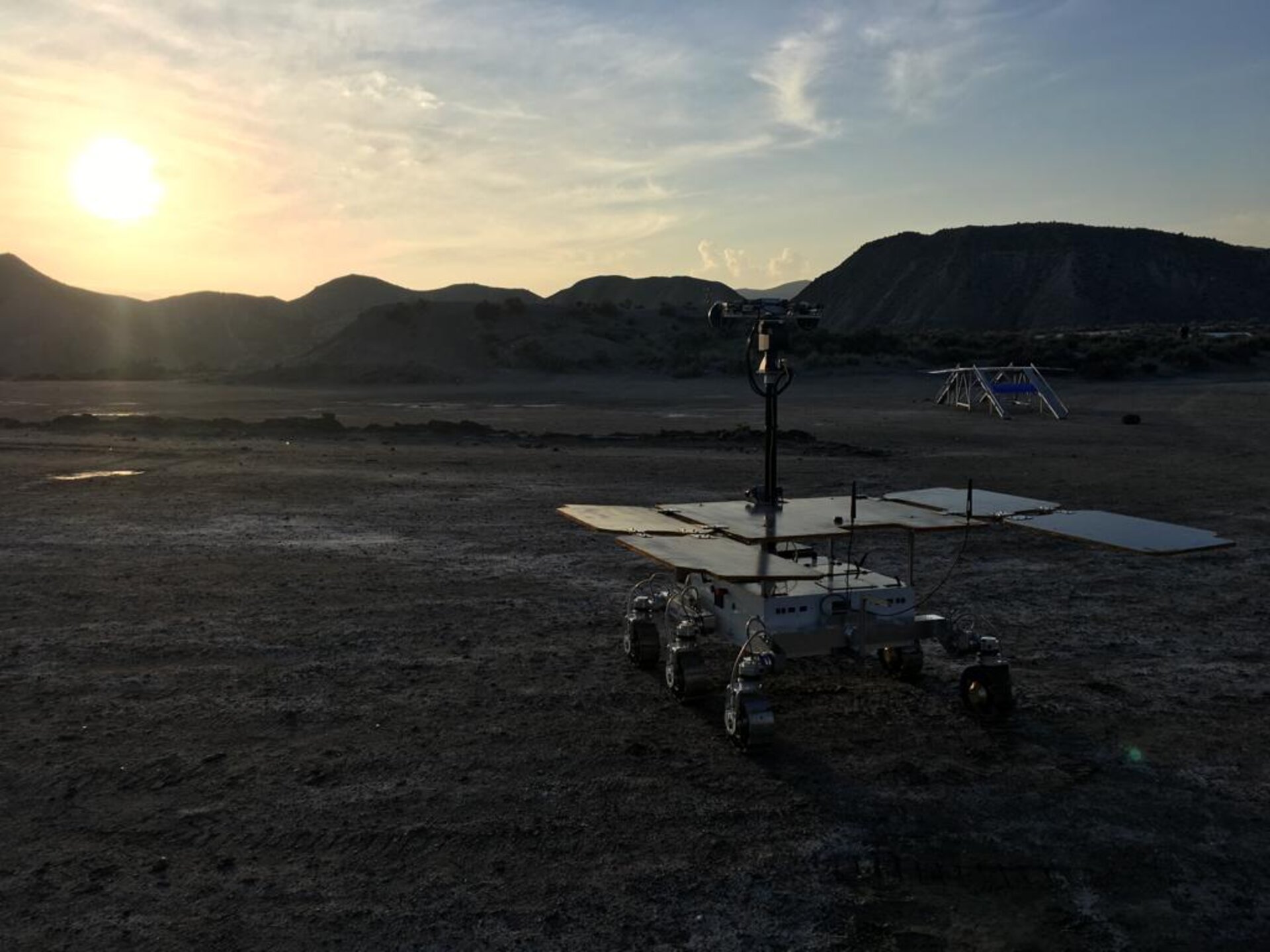 The sun set on a week of trials for the ExoMars rover prototype named Charlie (in the foreground). The first of two field trials for the mission, known as ExoFiT, took place in the Tabernas desert in Spain between 13-26 October.

While Charlie was located in Spain, mission operators and instrument scientists were based over 1000 km away at mission control in Harwell, UK, near ESA’s ECSAT centre where ExoFit was managed. The distance was crucial as teams operating a rover on the Martian surface must contend with infrequent communication possibilities and must run science operations with what little information they have. The rover itself is designed to carry out activities such as a traverse or observations in between communication blackouts as well as send data to Earth in preparation for the next martian day.

During the 10-day trial, the team practised driving the rover off its landing platform (in the background of this image), targeting sites of interest, and sampling rocks. Decisions were made based on data transmitted by the rover together with maps of the terrain.

Naturally, the team encountered technical difficulties, to be expected in real test conditions. Rainfall disrupted events and forced the team to adapt and optimise their time. In the second week, the team managed to finish activities scheduled for two martian days in a single day.

The scenarios in general tested the rover’s radar instrument, close-up imager, panoramic mast imager and drill, with more specific tests aimed at replicating what will be performed on the martian surface. Once on the Red Planet, the rover drill beneath the surface to look for signs of life.

A lot is learned during these simulation studies to fine-tune equipment and train mission specialists. The issues encountered in the field trial will be addressed and tested again in a second field campaign introducing more complex autonomous rover operations.

Set for February 2019, the second field trial will take place in the Atacama desert of Chile. Atacama is one of the most similar terrains on Earth to Mars, with the added benefit of drier weather and the nearby European Southern Observatory’s Paranal Observatory over the Tabernas desert.

The operational challenges observed provide valuable inputs for the ExoMars rover and other planetary rovers such as the Sample Fetch Rover of the NASA-ESA Mars Sample Return mission. Currently in the concept phase, ESA is working with international partners to achieve its vision of Europe’s expanding role in space exploration.