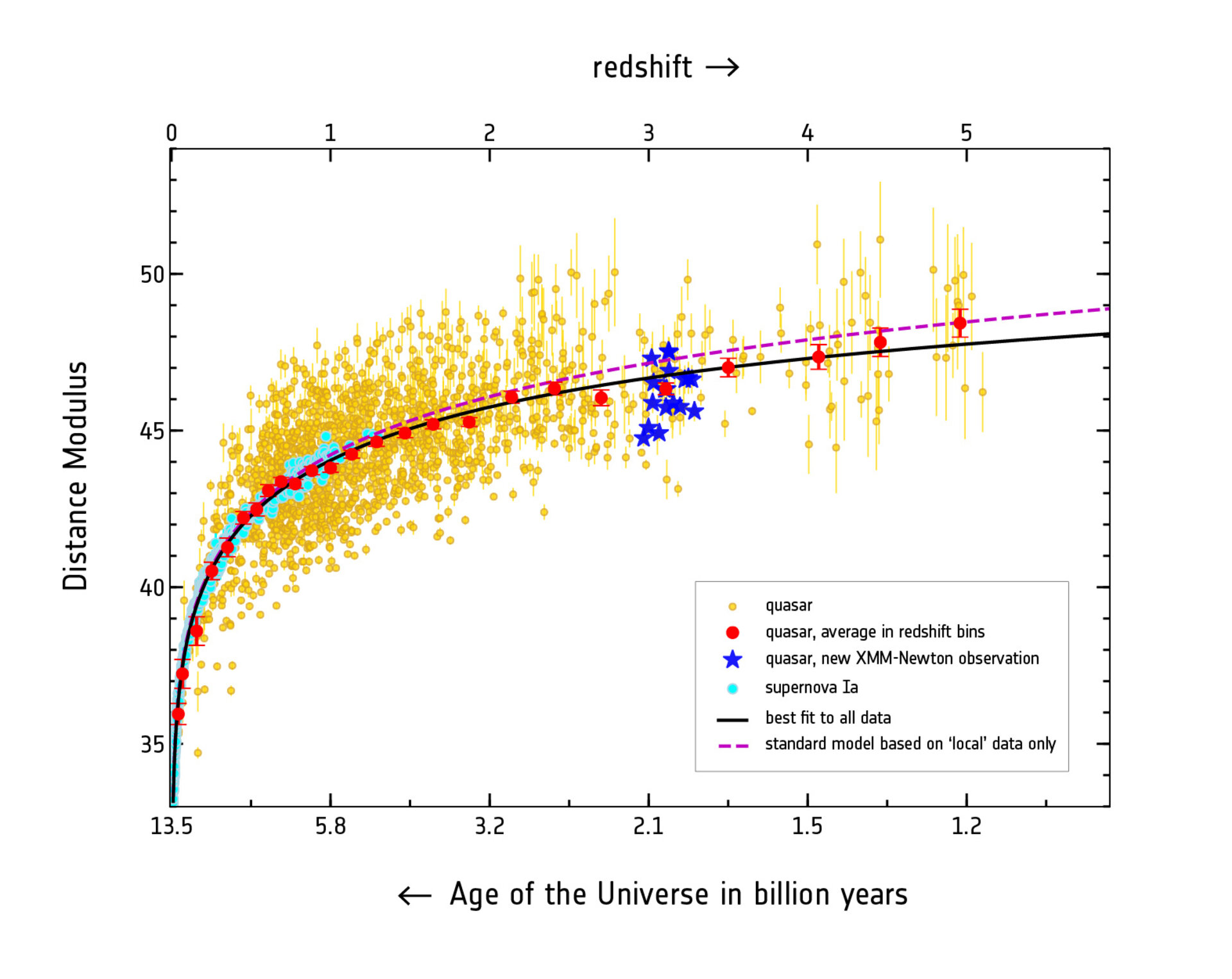 Graph showing measurements of the distance to astronomical objects such as type-Ia supernovas (cyan symbols) and quasars (yellow, red and blue symbols) that can be used to study the expansion history of the Universe.

Type-Ia supernovas are the most notable class of ‘standard candles’– astronomical sources whose properties allow us to gauge their distances. They consist of the spectacular demise of white dwarf stars after they have over-filled on material from a companion star, generating explosions of predictable brightness that allows astronomers to pinpoint the distance. Observations of these supernovas in the late 1990s revealed the Universe’s accelerated expansion over the last few billion years.

Quasars are the cores of galaxies where an active supermassive black hole is pulling in matter from its surroundings at very intense rates. As material falls onto the black hole, it forms a swirling disc that radiates in visible and ultraviolet light; this light, in turn, heats up nearby electrons, generating X-rays.

Quasars can also be used as standard candles on the basis of the relation between their ultraviolet and X-ray brightness, measuring the expansion of the Universe up to 12 billion years ago. Applying this method to a large sample of quasars, a team of astronomers found there might be more to the early expansion of the Universe than predicted by the standard model of cosmology.

The yellow points show the full sample of about 1600 quasars that were used in the study. The X-ray data were retrieved largely from the ESA’s XMM-Newton archive; a new set of data, specially obtained with XMM-Newton in 2017 to look at very distant quasars, is shown in blue symbols. The team used additional X-ray data for a small number of even more distant quasars and for some relatively nearby ones, observed with NASA’s Chandra and Swift X-ray observatories, respectively, while the ultraviolet observations were obtained with the ground-based Sloan Digital Sky Survey.

The combination of the quasar sample, which spans almost 12 billion years of cosmic history, with the more local sample of type-Ia supernovas, covering only the past eight billion years or so, yields similar results in the overlapping epochs. However, in the earlier phases that can only be probed with quasars, the astronomers found a discrepancy between the observed evolution of the Universe (black curve) and the prediction based on the standard cosmological model using only local data (magenta curve).

Looking into this previously poorly explored period of cosmic history with the help of quasars, the astronomers have revealed a possible tension in the standard model of cosmology, which might require the addition of extra parameters to reconcile the data with theory.