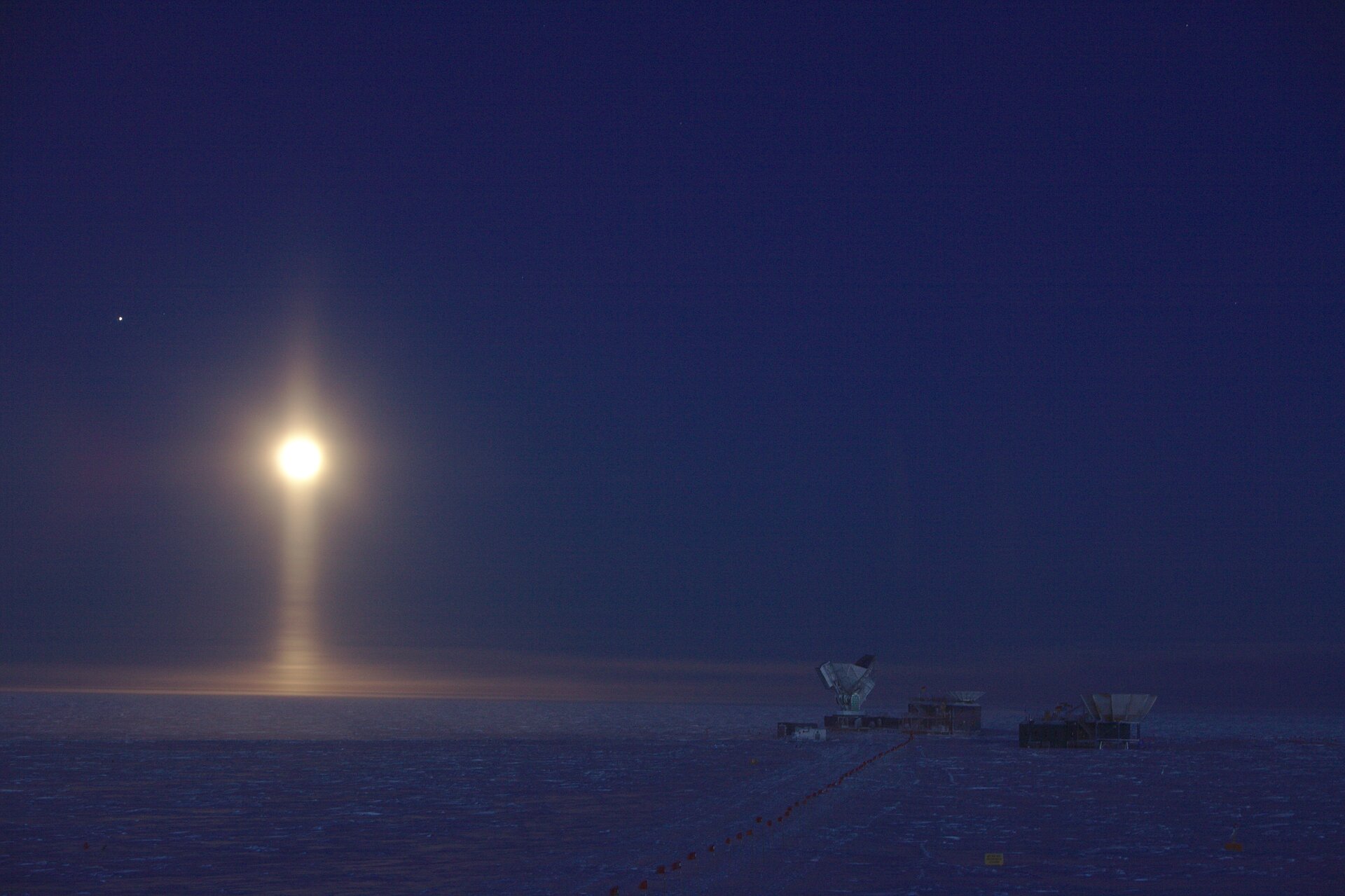 This ethereal image was taken by Daniel Michalik, currently a research fellow at ESA. It was shortlisted as a finalist in the Royal Society photography competition in 2017, and went on to become the overall winner in the ‘Astronomy’ category – and it’s easy to see why.

It captures a beautiful scene at the Earth’s South Pole in Antarctica, where the dry, cold conditions allow for observations of a number of rare celestial phenomena that are seen far less often elsewhere. The sight captured beautifully here by Daniel is a good example of such a phenomenon: a light pillar.

The Moon illuminates a column of bright light between it and the frozen plateau below, creating a scene akin to a dramatic lunar spotlight beaming downwards. This is caused by moonlight reflecting from and refracting through ice crystals suspended in our planet’s atmosphere, producing a diffuse, eerie glow. Atmospheric ice crystals are behind a number of the phenomena showcased wonderfully at the South Pole, including halos and arcs (glowing rings that encircle the Sun or Moon in the sky), as well as sun and moon dogs (bright, circular spots of light that sometimes appear along these halos around the Sun or Moon).

Jupiter can be seen as a bright spot to the upper left of the Moon. This photograph is one single long exposure with minor contrast and exposure adjustments, taken at -60°C.

Daniel wintered at the Geographic South Pole in 2017 while he worked at the 10-metre South Pole Telescope (SPT), visible here as the leftmost radio dish. The other two dishes visible are BICEP2 (Background Imaging of Cosmic Extragalactic Polarization 2), and the Keck Array. These telescopes are exploring the very earliest days of the cosmos. They are located in the Dark Sector of the Amundsen–Scott South Pole Station, where any sources of electro-magnetic interference that could potentially affect the observations are kept as low as possible. This means no wifi, no radio contact, and no bright lights in this area, amongst others.

A line of flags is visible snaking away from the camera towards these telescopes – it helps astronomers and staff find their way to the site during the five months of continuous winter darkness.

The Moon creates a number of fascinating and unique sights for terrestrial observers, perhaps the most famous being eclipses. The most recent lunar eclipse – when the Earth slips between the Moon and the Sun, casting its shadow onto our satellite – occurred during the early hours of this morning. The total lunar eclipse could be seen from North America, South America, and parts of western and northern Europe and Africa.

While the Moon has not welcomed human visitors since the 1970s, it is again becoming a target for space agencies. The Moon is a key reference point for understanding the evolution of the early Solar System. There is also renewed interest in a long-term human presence on the Moon as it offers great potential as a ‘springboard’ for humans to explore other regions of space – Mars being the next goal.