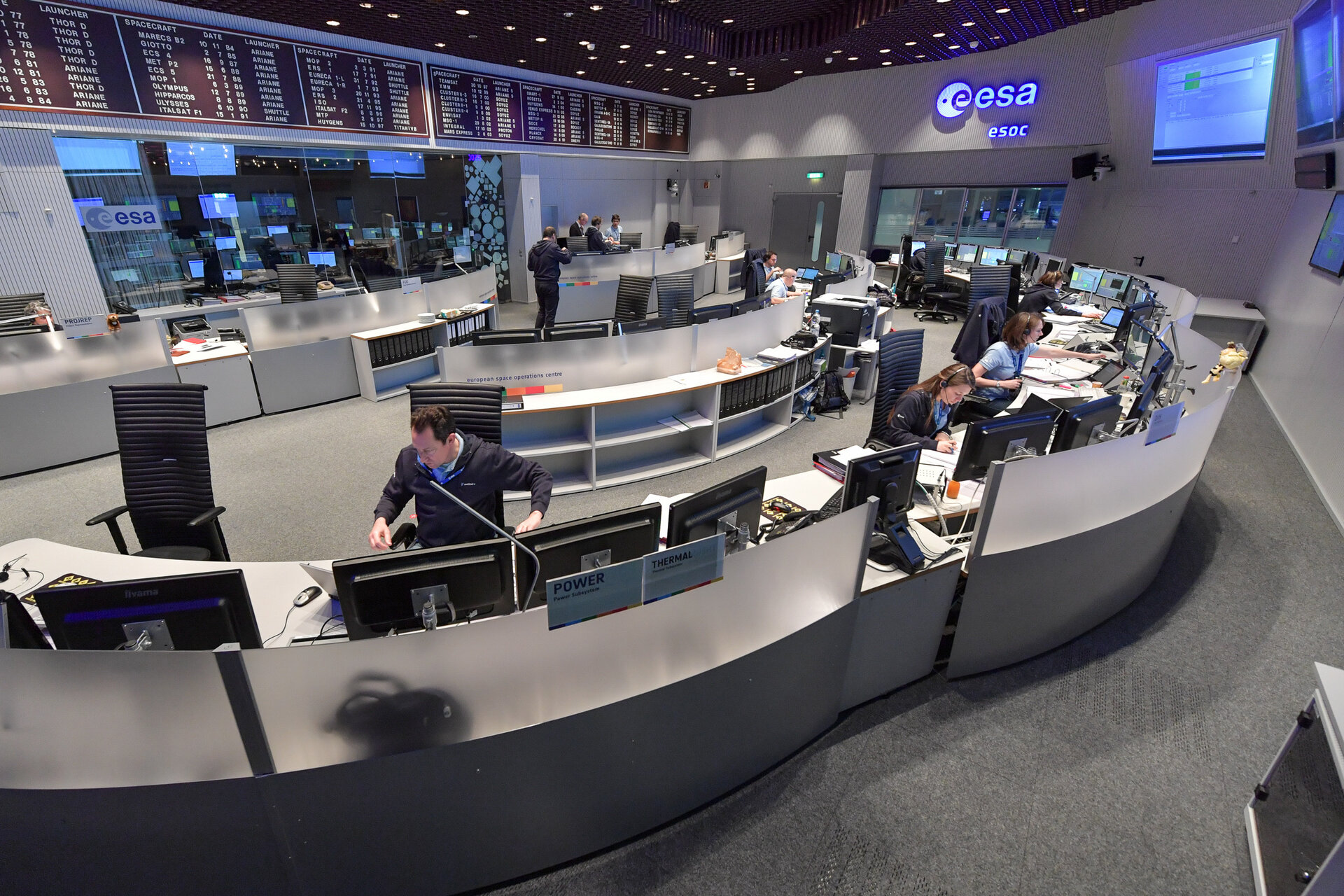 10: Taking control and staying in touch

Once a spacecraft is released from the rocket that boosts it into orbit, the spotlight is onto the men and women controlling the mission from the main control room of ESA’s European Space Operations Centre in Darmstadt, Germany.

Every mission is assigned a Flight Control Team, comprising engineers and technicians specialising in each of the mission’s technical areas, including attitude and orbit control, power, thermal management and onboard computer systems. They are led by an experienced Spacecraft Operations Manager, and are supported in turn by an extended ‘team of teams’ of experts working in areas such as highly precise flight dynamics, sophisticated software systems and high-tech ground tracking stations.

They provide oversight for their missions 24 hours per day, year round, using tools, systems and apps developed by European industry for the unforgiving, no-second-chances environment of mission control.

Many of these experts are sourced from European industry and, for each new mission, everyone must undergo a rigorous, months-long training and simulation campaign to measure the knowledge of each individual and test their combined ability to handle any contingency, whether it occurs just above in Earth orbit or hundreds of millions of kilometres away – when minutes matter and decisions have consequences.

All this is only possible through the capabilities provided through ESA’s mission operations infrastructure, funded by the Basic Activities resources provided by Member States.

Flying the spacecraft is made possible through cutting-edge software systems, while operational simulator systems capable of fully simulating the spacecraft and its environment enables team training in advance of the launch and supports them during routine and contingency operations.

All this information is fed into the mission control system, which is the primary interface for the flight control team to send commands to their spacecraft and interpret the data sent back from onboard systems.

Increasingly missions – such as ESA’s Swarm trio, the Cluster quartet and the European Union’s Copernicus Sentinels – are being operated in formations made up of two, three, four or more satellites, making the ongoing task of flight control and flight dynamics highly challenging.

Mission control infrastructure, expertise and know-how are regularly exchanged with partner space agencies – and are increasingly provided to new space actors such as universities and commercial startups planning missions around Earth, to the Moon and beyond.

For ESA’s next Ministerial Council, Space19+, set for the end of this year, the Agency is asking Europe’s space ministers for a substantial investment for its core Basic Activities, helping to support a new generation of space missions as efficiently as possible. ESA’s Basic Activities have three main objectives: to enable the future through early stage research and development, commencing the Agency’s seamless grid of innovation; develop and maintain ESA’s common infrastructure and expertise; and, develop, preserve and disseminate knowledge for European capacity building and sustainable growth – inspiring and promoting creativity.