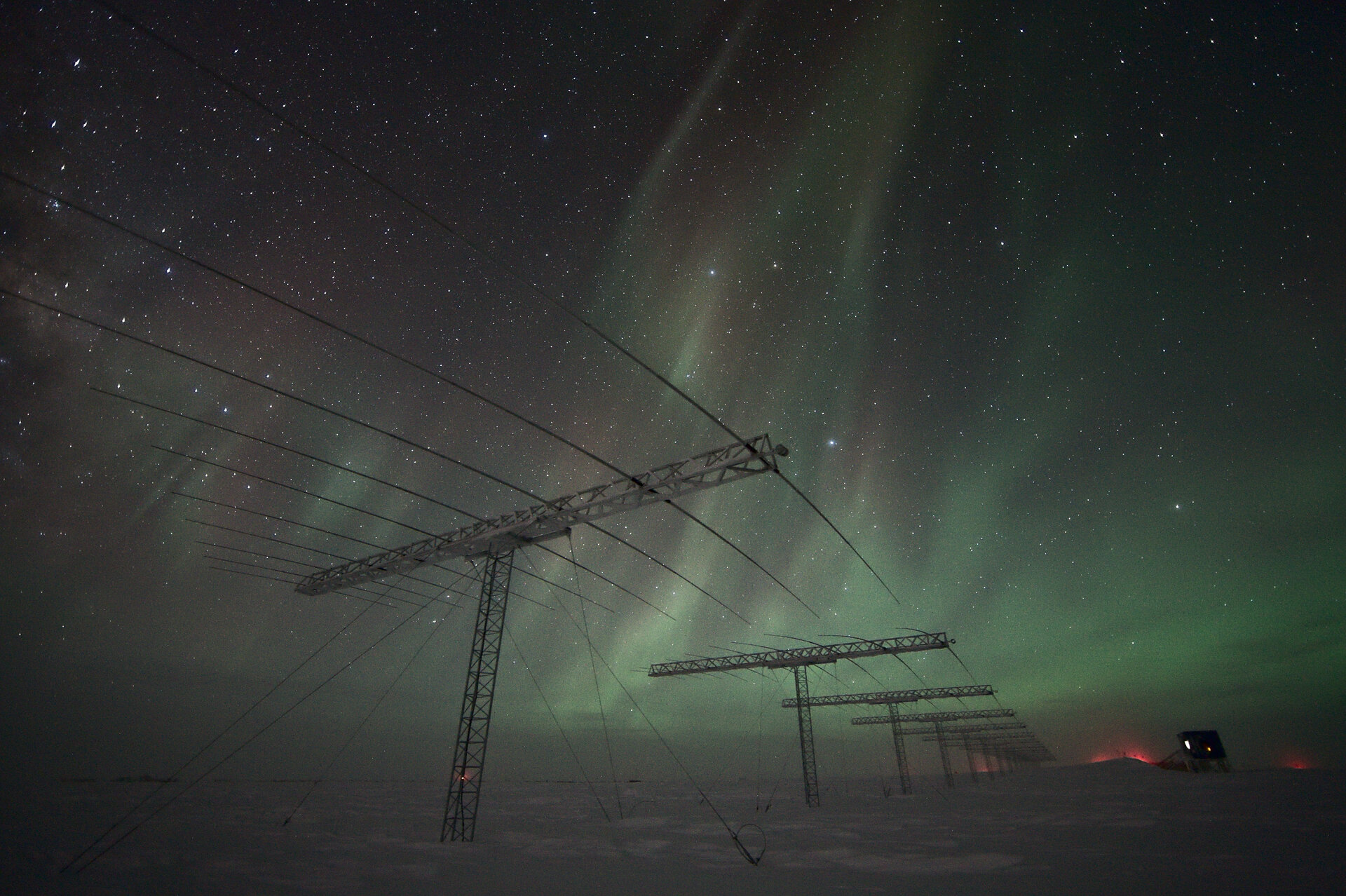 This photograph, taken a short hike from the Geographic South Pole in Antarctica, shows some of the antennas comprising the Super Dual Auroral Radar Network (SuperDARN) array. They are visible here as the chain of antennas and wiring stretching away into the distance. The red lights along the horizon in the background are lights marking the entrances to the Amundsen-Scott research station, which lies a good kilometre distant.

SuperDARN is a network of radar antennas that monitors and explores the geomagnetic effects occurring in the Earth’s upper atmosphere. While some of these antennas are located at the South Pole, the network stretches worldwide and antennas are found in both the northern and southern hemispheres. One such geomagnetic effect is neatly captured here as wispy curtains and streaks of green filling the dark night sky above the antennas themselves: an aurora.

Auroras, informally known as polar lights, form as charged particles from the Sun flow into our region of space, hit the outer boundary of Earth’s magnetic field, and move further inwards to collide with the atoms and molecules in our planet’s atmosphere. The aurora seen here is known as aurora australis, or the southern lights.

Such phenomena form a key component of ‘space weather’, dynamic changes in the Earth’s cosmic environment that are driven by the activity of the Sun. As these can affect the function of both space-borne and ground-based systems and services, it’s crucial to monitor space weather in order to predict and mitigate its adverse effects. ESA does so via the Space Situational Awareness Space Weather Segment, and various science missions such as Cluster and Swarm, along with dedicated Sun-watching satellites to better understand our nearest star as a complete system.

This image was taken by ESA research fellow Daniel Michalik, who wintered at the Amundsen–Scott South Pole Station in Antarctica in 2017. It was taken as a single long exposure with minor contrast and exposure adjustments. At extremely cold temperatures of -60°C, Daniel was required to layer up, use a hot water bottle to keep the camera warm, and to pack his pockets with plentiful spare batteries. The photographer’s stoicism paid off, as the image was shortlisted as a finalist in the Royal Society photography competition in 2017. Another of Daniel’s images, published here, was the overall winner of the ‘Astronomy’ category.

Between 3 and 5 March ESA is highlighting the effects of space weather with the #AuroraHunters SocialSpace event at the other 'end' of the planet, in Tromsø, Norway. Follow the conversation on Twitter to see more great aurora images!