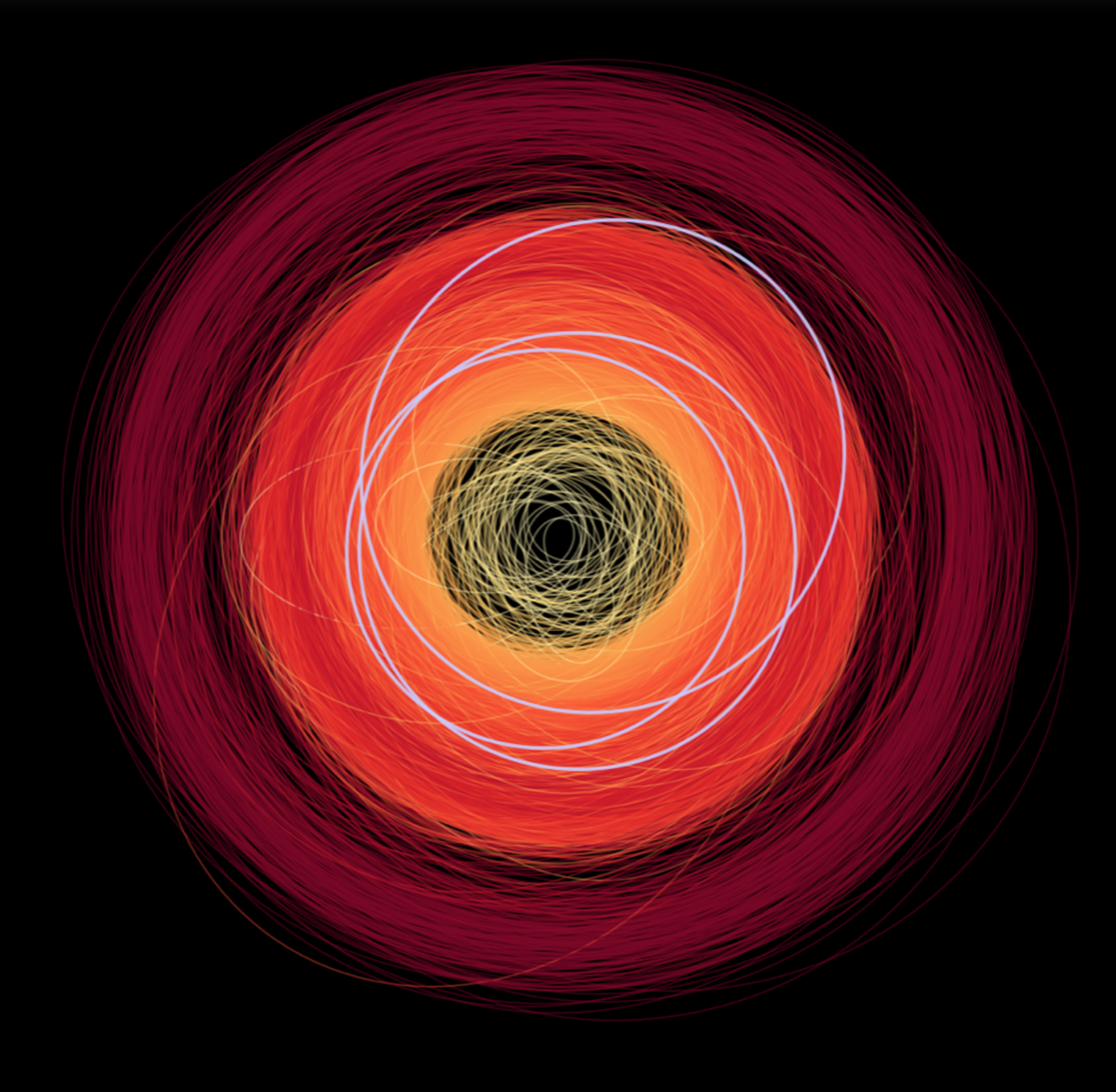 While scanning the sky to chart a billion stars in our Milky Way galaxy, ESA’s Gaia satellite is also sensitive to celestial bodies closer to home, and regularly observes asteroids in our Solar System.

This view shows the orbits of more than 14 000 known asteroids (with the Sun at the centre of the image) based on information from Gaia’s second data release, which was made public in 2018.

The majority of asteroids depicted in this image, shown in bright red and orange hues, are main-belt asteroids, located between the orbits of Mars and Jupiter; Trojan asteroids, found around the orbit of Jupiter, are shown in dark red.

In yellow, towards the image centre, are the orbits of several tens of near-Earth asteroids observed by Gaia: these are asteroids that come to within 1.3 astronomical units (AU) to the Sun at the closest approach along their orbit. The Earth circles the Sun at a distance of 1 AU (around 150 million km) so near-Earth asteroids have the potential to come into proximity with our planet.

Most asteroids that Gaia detects are already known, but every now and then, the asteroids seen by ESA's Milky Way surveyor do not match any existing observations. This is the case for the three orbits shown in grey in this view: these are Gaia’s first asteroid discoveries.

The three new asteroids were first spotted by Gaia in December 2018, and later confirmed by follow-up observations performed with the Haute-Provence Observatory in France, which enabled scientists to determine their orbits. Comparing these informations with existing observations indicated the objects had not been detected earlier.

While they are part of the main belt of asteroids, all three move around the Sun on orbits that have a greater tilt (15 degrees or more) with respect to the orbital plane of planets than most main-belt asteroids.

The population of such high-inclination asteroids is not as well studied as those with less tilted orbits, since most surveys tend to focus on the plane where the majority of asteroids reside. But Gaia can readily observe them as it scans the entire sky from its vantage point in space, so it is possible that the satellite will find more such objects in the future and contribute new information to study their properties.

Alongside the extensive processing and analysis of Gaia’s data in preparation for subsequent data releases, preliminary information about Gaia’s asteroid detections are regularly shared via an online alert system so that astronomers across the world can perform follow-up observations. To observe these asteroids, a 1-m or larger telescope is needed.

Once an asteroid detected by Gaia has been identified also in ground-based observations, the scientists in charge of the alert system analyse the data to determine the object’s orbit. In case the ground observations match the orbit based on Gaia’s data, they provide the information to the Minor Planet Center, which is the official worldwide organization collecting observational data for small Solar System bodies like asteroids and comets.

This process may lead to new discoveries, like the three asteroids with orbits depicted in this image, or to improvements in the determination of the orbits of known asteroids, which are sometimes very poorly known. So far, several tens of asteroids detected by Gaia have been observed from the ground in response to the alert system, all of them belonging to the main belt, but it is possible that also near-Earth asteroids will be spotted in the future.

A number of observatories across the world are already involved in these activities, including the Haute-Provence Observatory, Kyiv Comet station, Odessa-Mayaki, Terskol, C2PU at Observatoire de la Côte d'Azur and Las Cumbres Observatory Global Telescope Network. The more that join, the more we will learn about asteroids – known and new ones alike.

Space Safety at ESA
Solar activity, asteroids and artificial space debris all pose threats to our planet and our use of space.