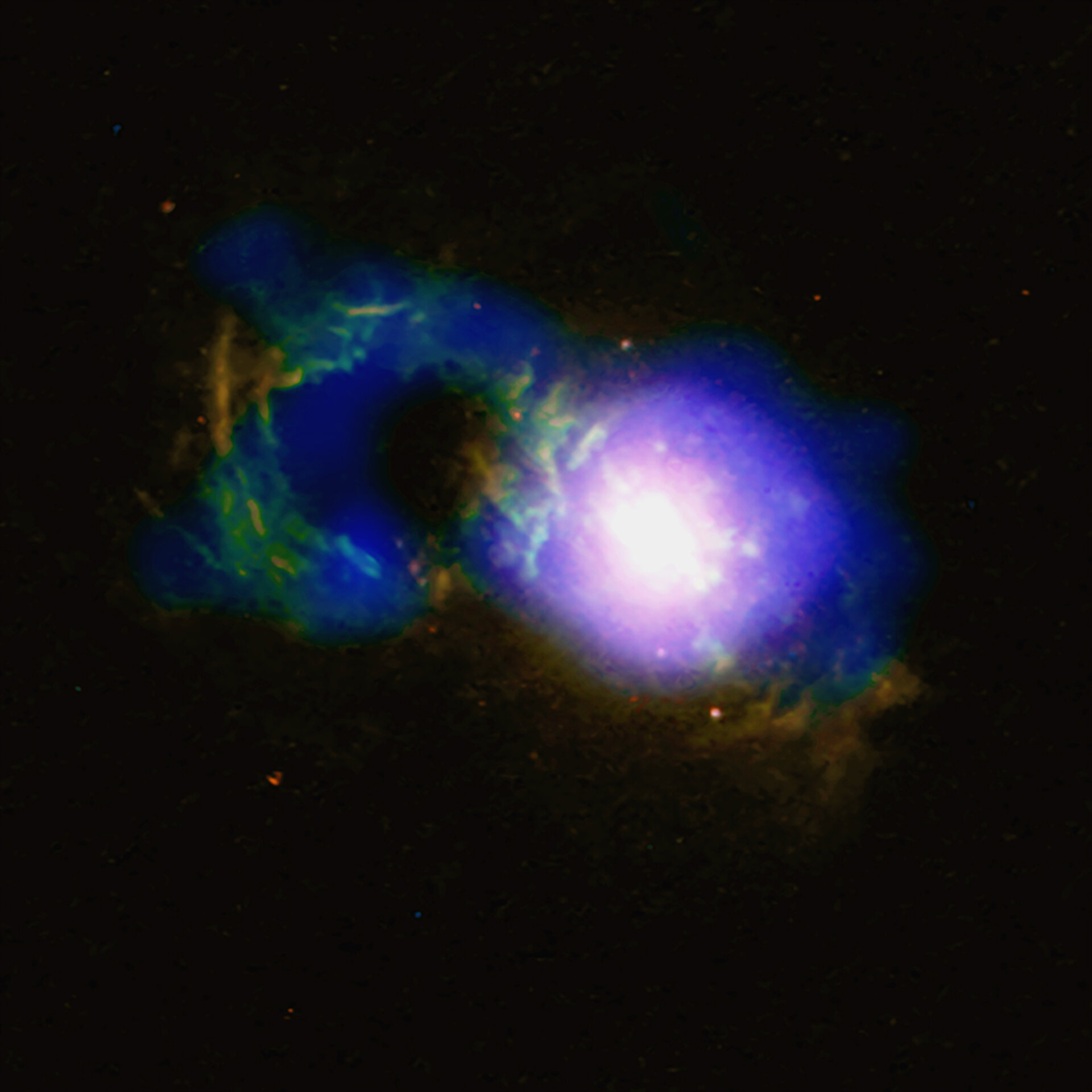 Storm in the Teacup quasar

This image shows a quasar nicknamed the Teacup due to its shape. A quasar is an active galaxy that is powered by material falling into its central supermassive black hole. They are extremely luminous objects located at great distances from Earth. The Teacup is 1.1 billion light years away and was thought to be a dying quasar until recent X-ray observations shed new light on it.

The Teacup was discovered in 2007 as part of the Galaxy Zoo project, a citizen science project that classified galaxies using data from the Sloan Digital Sky Survey. A powerful eruption of energy and particles from the central black hole created a bubble of material that became the Teacup's handle, which lies around 30 000 light years from the centre.

Observations revealed ionised atoms in the handle of the Teacup, possibly caused by strong radiation coming from the quasar in the past. This past level of radiation dwarfed the current measurements of the luminosity from the quasar. The radiation seemed to have diminished by 50 to 600 times over the last 40 000 to 100 000 years, leading to the theory that the quasar was rapidly fading.

But new data from ESA's XMM-Newton telescope and NASA's Chandra X-ray observatory reveal that X-rays are coming from a heavily obscured central source, which suggests that the quasar is still burning bright beneath its shroud. While the quasar has certainly dimmed over time, it is nowhere near as significant as originally thought, perhaps only fading by a factor of 25 or less over the past 100 000 years.

The Chandra data also showed evidence for hotter gas within the central bubble, and close to the 'cup' which surrounds the central black hole. This suggests that a wind of material is blowing away from the black hole, creating the teacup shape.

In the image shown here the X-ray data is coloured in blue and optical observations from the NASA/ESA Hubble Space Telescope are shown in red and green. Another image including radio data also shows a second ‘handle’ on the other side of the ‘cup’.

The research is described in The Astrophysical Journal Letters: “Storm in a Teacup: X-ray view of an obscured quasar and superbubble” by G. Lansbury et al.

Explore the XMM-Newton data from this study in ESA’s archives.