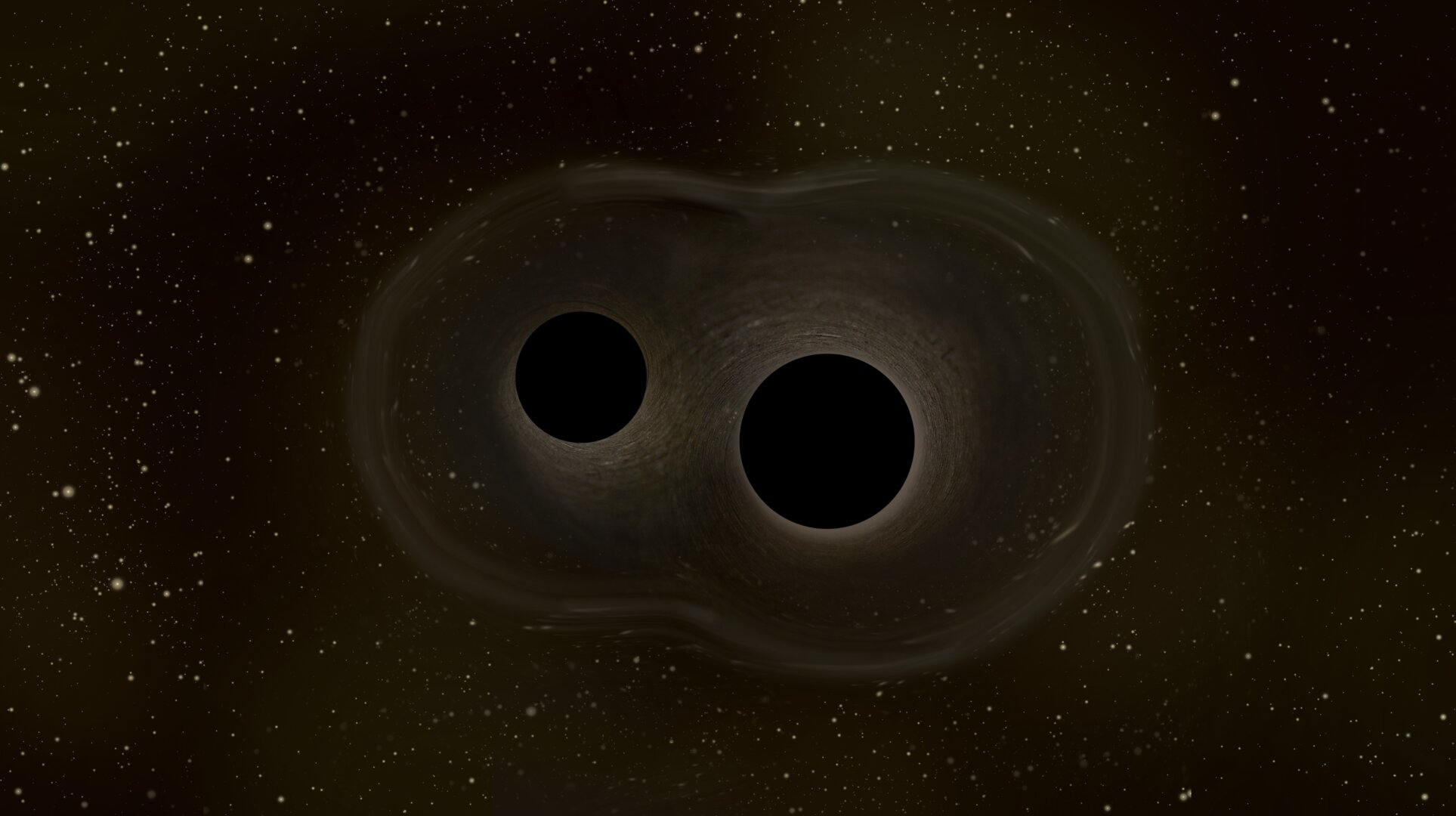 Black holes are among the most fascinating objects in the Universe. Enclosing huge amounts of mass in relatively small regions, these compact objects have enormous densities that give rise to some of the strongest gravitational fields in the cosmos, so strong that nothing can escape – not even light.

This artistic impression shows two black holes that are spiralling towards each other and will eventually coalesce. A black hole merger was first detected in 2015 by LIGO, the Laser Interferometer Gravitational-Wave Observatory, which detected the gravitational waves – fluctuations in the fabric of spacetime – created by the giant collision.

Black holes and gravitational waves are both predictions of Albert Einstein’s general relativity, which was presented in 1915 and remains to date the best theory to describe gravity across the Universe.

Karl Schwarzschild derived the equations for black holes in 1916, but they remained rather a theoretical curiosity for several decades, until X-ray observations performed with space telescopes could finally probe the highly energetic emission from matter in the vicinity of these extreme objects. The first ever image of a black hole’s dark silhouette, cast against the light from matter in its immediate surrounding, was only captured recently by the Event Horizon Telescope and published just last month.

As for gravitational waves, it was Einstein himself who predicted their existence from his theory, also in 1916, but it would take another century to finally observe these fluctuations. Since 2015, the ground-based LIGO and Virgo observatories have assembled over a dozen detections, and gravitational-wave astronomy is a burgeoning new field of research.

But another of Einstein’s predictions found observational proof much sooner: the gravitational bending of light, which was demonstrated only a few years after the theory had appeared, during a total eclipse of the Sun in 1919.

In the framework of general relativity, any object with mass bends the fabric of spacetime, deflecting the path of anything that passes nearby – including light. An artistic view of this distortion, also known as gravitational lensing, is depicted in this representation of two merging black holes.

One hundred years ago, astronomers set out to test general relativity, observing whether and by how much the mass of the Sun deflects the light of distant stars. This experiment could only be performed by obscuring the Sun’s light to reveal the stars around it, something that is possible during a total solar eclipse.

On 29 May 1919, Sir Arthur Eddington observed the distant stars around the Sun during an eclipse from the island of Príncipe, in West Africa, while Andrew Crommelin performed similar observations in Sobral, in the north east of Brazil. The results, presented six months later, indicated that stars observed near the solar disc during the eclipse were slightly displaced, with respect to their normal position in the sky, roughly by the amount predicted by Einstein’s theory for the Sun’s mass to have deflected their light.

“Lights All Askew in the Heavens,” headlined the New York Times in November 1919 to announce the triumph of Einstein’s new theory. This inaugurated a century of exciting experiments investigating gravity on Earth and in space, proving general relativity more and more precisely.

We have made giant leaps over the past hundred years, but there is still much for us to discover. Athena, ESA’s future X-ray observatory, will investigate in unprecedented detail the supermassive black holes that sit at the centre of galaxies. LISA, another future ESA mission, will detect gravitational waves from orbit, looking for the low-frequency fluctuations that are released when two supermassive black holes merge and can only be detected from space.

Both missions are currently in the study phase, and are scheduled to launch in the early 2030s. If Athena and LISA could operate jointly for at least a few years, they could perform a unique experiment: observing the merger of supermassive black holes both in gravitational waves and X-rays, using an approach known as multi-messenger astronomy.

We have never observed such a merger before: we need LISA to detect the gravitational waves and tell us where to look in the sky, then we need Athena to observe it with high precision in X-rays to see how the mighty collision affects the gas surrounding the black holes. We don’t know what happens during such a cosmic clash so this experiment, much like the eclipse of 1919 that first proved Einstein’s theory, is set to shake our understanding of gravity and the Universe.