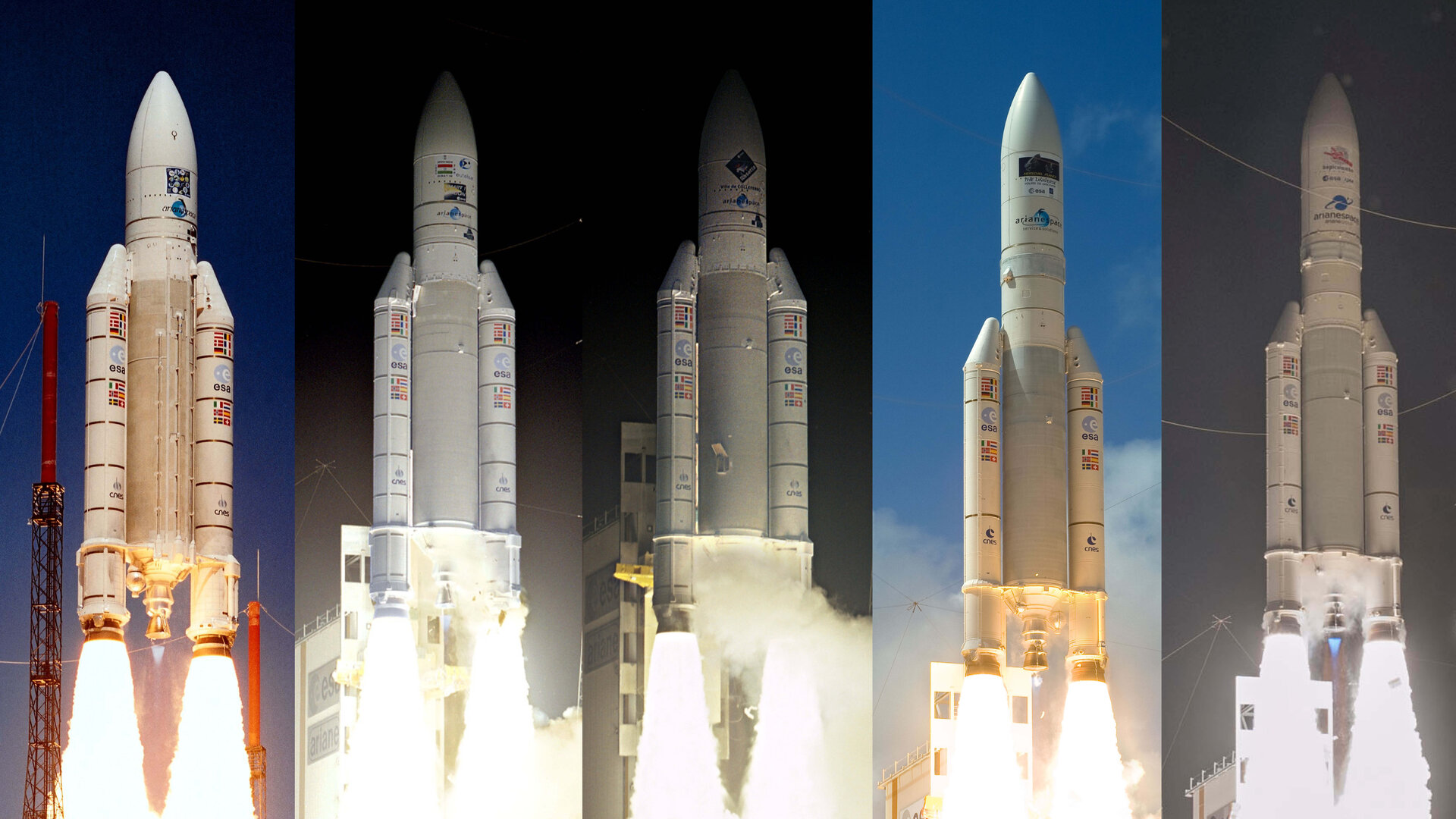 Ariane 5 launchers with science missions onboard

If it wasn’t for launch capabilities we would never have delved deep into the echo of the Big Bang nor lived out the adventures of Rosetta and Philae at Comet 67P/Churyumov-Gerasimenko. Nor would we have captured some of the Universe’s most energetic phenomena, or be on our way to the innermost planet of the Solar System. Some of ESA’s biggest science missions only got off the ground – literally – thanks to the mighty Ariane 5, one of the most reliable launchers that gives access to space from Europe’s Spaceport in Kourou, French Guiana.

ESA has been using the Ariane family of launch vehicles right back since Ariane 1, which launched the comet-chaser Giotto, ESA’s first deep space mission, in 1985. Later, the astrometry satellite Hipparcos rode into space on an Ariane 4 in 1989 and the Infrared Space Observatory launched in 1995.

One of the first Ariane 5 flights took XMM-Newton into space twenty years ago, in December 1999 (leftmost image). The X-ray space observatory is an impressive workhorse, enabling ground-breaking discoveries on a range of cosmic mysteries from enigmatic black holes to the evolution of galaxies across the Universe.

SMART-1, Europe’s first mission to the Moon, got its ride to space in 2003 (second image from left). It was used to test solar electric propulsion and other technologies, while performing scientific observations of the Moon. BepiColombo launched in 2018 (far right) on the 101st Ariane 5 launch; it is using electric propulsion, in combination with planetary gravity assists, to reach Mercury.

In between, Rosetta began its ten year journey through the Solar System starting with a boost into space on an Ariane 5 (middle image), and in 2009 Herschel and Planck shared a ride on the same launcher (second from right) from which they would both proceed to the second Lagrange point, L2, 1.5 million km from Earth in the opposite direction to the Sun, to reveal the Universe in new light. Observing in infrared wavelengths, Herschel unlocked the secrets of how stars and galaxies form and evolve, while Planck captured the most ancient light in the Universe, released only 380 000 years after the Big Bang, in greater detail than ever, shedding light on our 13.8 billion year long cosmic history.

Europe’s next generation launchers, including Ariane 6, will provide new opportunities for ESA’s upcoming science missions to fulfil their scientific goals from their various viewpoints in our Solar System.