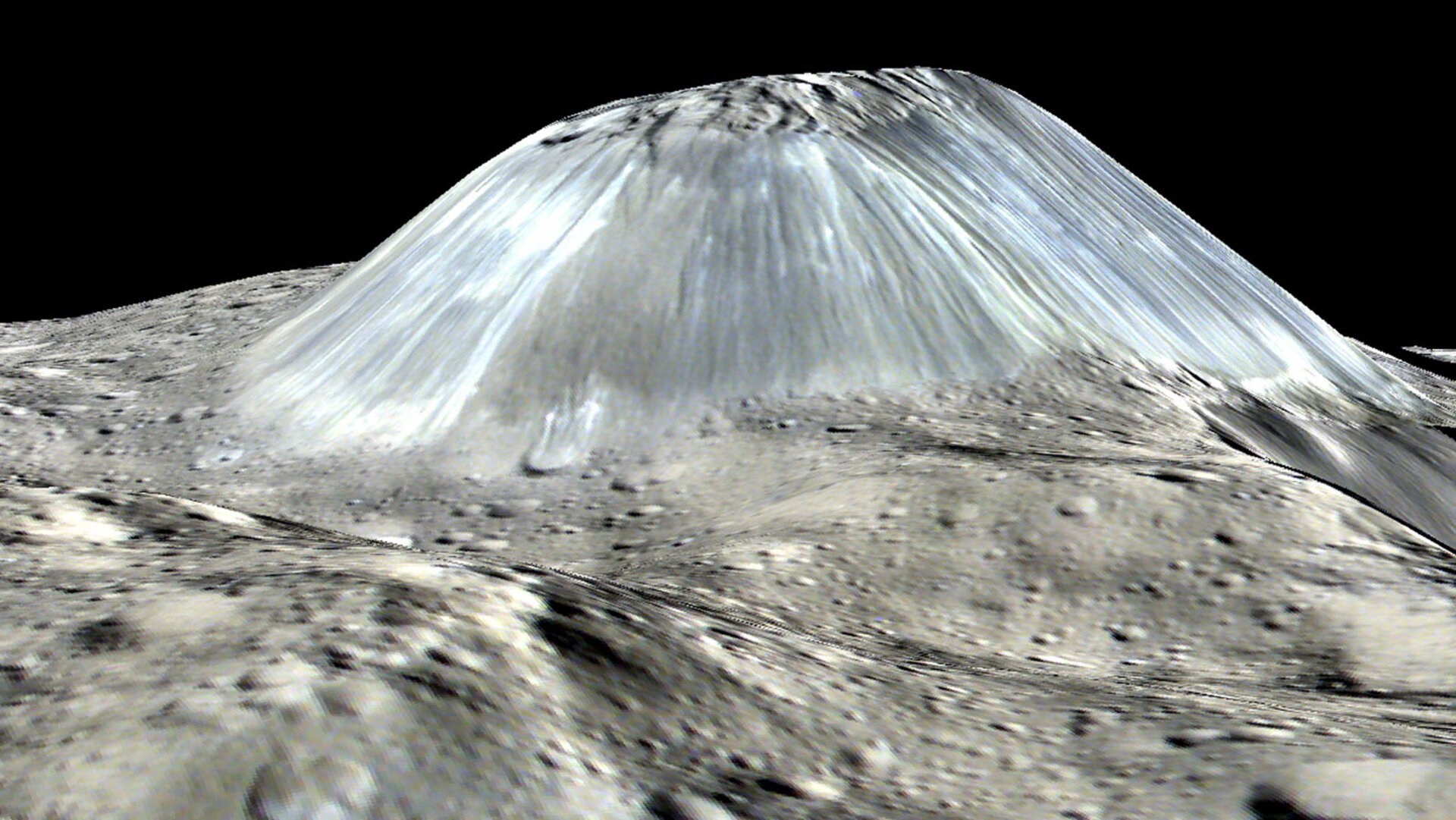 This image, based on observations from NASA’s Dawn spacecraft, shows the largest mountain on the dwarf planet Ceres.

Dawn was the first mission to orbit an object in the asteroid belt between Mars and Jupiter, and spent time at both large asteroid Vesta and dwarf planet Ceres. Ceres is one of just five recognised dwarf planets in the Solar System (Pluto being another). Dawn entered orbit around this rocky world on 6 March 2015, and studied its icy, cratered, uneven surface until it ran out of fuel in October of 2018.

One of the features spotted by the mission is shown here in this reconstructed perspective view: a mountain named Ahuna Mons. This mountain rises to an elevation of 4000 m at its peak – Europe’s Mont Blanc on Earth would rise slightly above it (as measured from sea level) – and is marked by numerous bright streaks that run down its flanks. Scientists have determined that these marks are actually salt deposits left behind from the formation of Ahuna Mons, when plumes of saltwater and mud rose and erupted from within Ceres, puncturing the surface and creating the mountain seen here. While temperatures on Ceres are far colder than those on Earth, this mechanism is thought to be somewhat similar to the formation of volcanoes by terrestrial magma plumes.

More recently, a study of Dawn data led by ESA research fellow Ottaviano Ruesch and Antonio Genova (Sapienza Università di Roma), published in Nature Geoscience in June, suggests that a briny, muddy ‘slurry’ exists below Ceres’ surface, surging upwards towards and through the crust to create Ahuna Mons. Another recent study, led by Javier Ruiz of Universidad Complutense de Madrid and published in Nature Astronomy in July, also indicates that the dwarf planet has a surprisingly dynamic geology.

Ceres was also the focus of an earlier study by ESA’s Herschel space observatory, which detected water vapour around the dwarf planet. Published in Nature in 2014, the result provided a strong indication that Ceres has ice on or near its surface. Dawn confirmed Ceres’ icy crust via direct observation in 2016, however, the contribution of the ice deposits to Ceres’ exosphere turned out to be much lower than that inferred from the Herschel observations.

The perspective view depicted in this image uses enhanced-colour combined images taken using blue (440 nm), green (750 nm), and infrared (960 nm) filters, with a resolution of 35 m/pixel. Ahuna Mons’ elevation has been exaggerated by a factor of two. The width of the dome is approximately 20 km. The spacecraft’s Framing Camera took the images from Dawn’s low-altitude mapping orbit from an altitude of 385 km in August 2016.