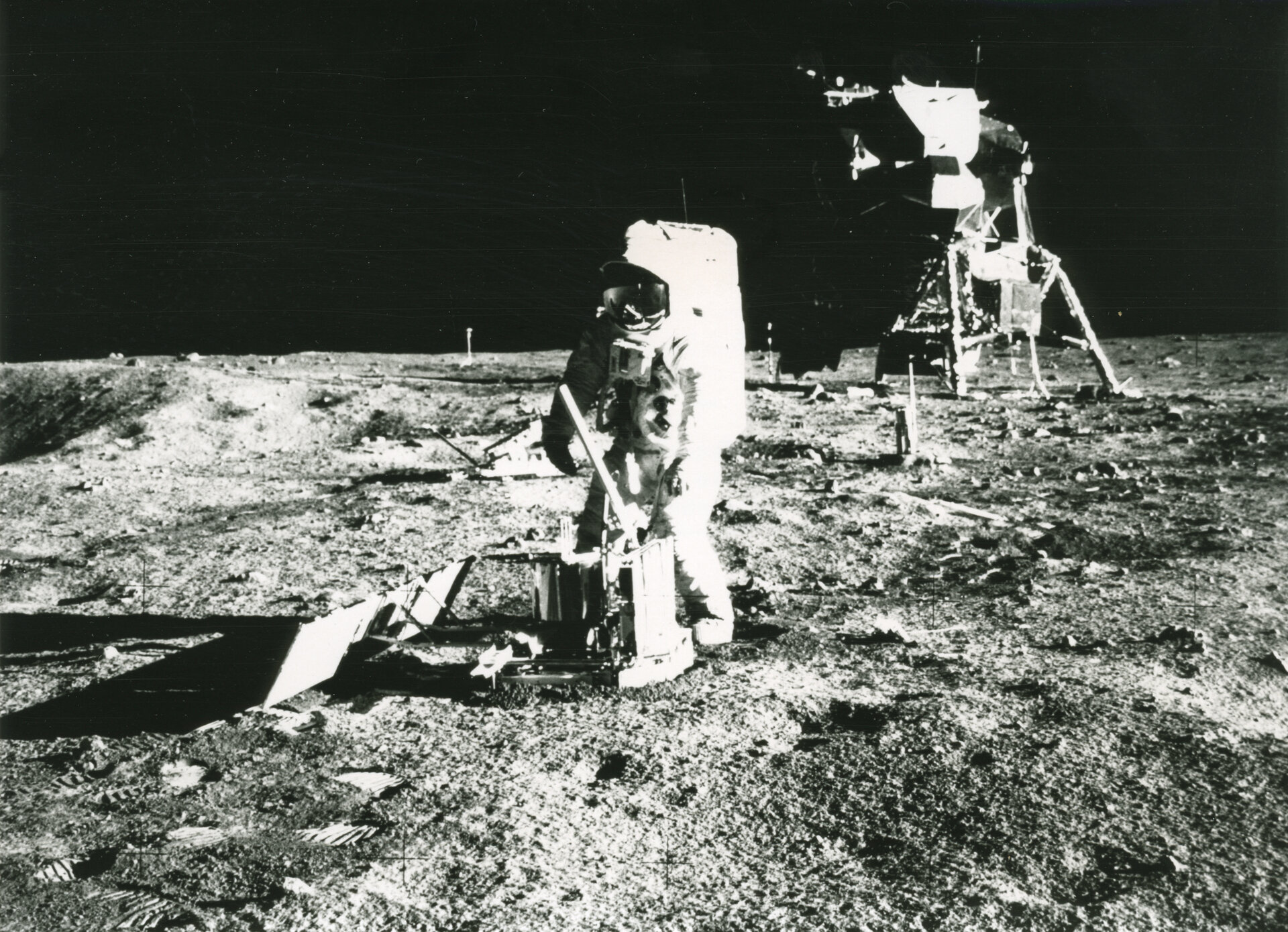 Buzz Aldrin and the Eagle

This Apollo 11 image is an Instagram photo before its time. Were the platform to have existed in 1969, the post may have looked a little something like this:

An exciting 13-minute landing, but Neil and I made it safely to the lunar surface. Tranquility Base as serene as her name. Magnificent desolation! Too excited to sleep, we’re on the Moon for crying out loud! Let’s get to work. @nasa

Of course, this image took much longer to publish. Taken by Neil Armstrong using a Hasselblad EL Data camera, the image had to be literally downloaded to Earth in the Apollo spacecraft before the film could be developed, assessed and eventually widely circulated.

The image was snapped in the early hours of 21 July 1969, a few hours after Buzz and Neil safely touched down on the lunar surface. The 13-minute descent was tense: the lander was moving much faster than anticipated and unexpected alarms flashed from the module’s guidance computers.

But the duo made it, and the rest is history.

In this image provided by the Hasselblad Foundation, Buzz Aldrin is setting up a seismograph. The caption accompanying the Hasselblad company’s release of this image states that neither astronaut fell over in the preparation. However, Neil Armstrong got tangled in a cord but with Aldrin’s help was able to get loose.

More photos will be on display at the Hasselblad exhibition opening at Brunkebergstorg Square in Stockholm, Sweden, this weekend to mark the 50th anniversary of the Apollo 11 Moon landing. The exhibition is part of this year’s space-themed Stockholm Culture Festival.

On display are iconic images of the Moon and the lunar surface taken using Hasselblad cameras as well as less widely publicised photographs of the astronauts and camera technicians preparing for the missions.

Hasselblad cameras were a mainstay of the Apollo mission photography. The 500EL models were carried in the Command Module that orbited the Moon as well as the Eagle descent module. The 500EL Data Camera was the first to be used on the lunar surface and was specially modified for its purpose.

The camera featured a Réseau plate, a glass square engraved with crosses to form a grid that was fitted to the back of the camera. The carefully calibrated crosses were 10 mm apart and were exposed on to the film when an image was taken. The crosses helped determine distance between objects in the photos.

Réseau plates were a common technique in photography, albeit on larger cameras. Hasselblad technicians adapted the technique to a smaller format camera, bringing down the cost, a great achievement at the time.

To keep the camera’s internal temperature more stable in the extreme environment of the lunar surface, it was finished in silver along with the film magazines.

The camera and film magazines were also fitted with tether rings, attached to a cord, that allowed the astronauts to more easily move them in and out of the lunar module.

After two and half hours of work on the surface and a seven-hour rest back in the lunar module, Neil and Buzz lifted off the lunar surface to join Michael Collins in the Columbia command module to head back home.