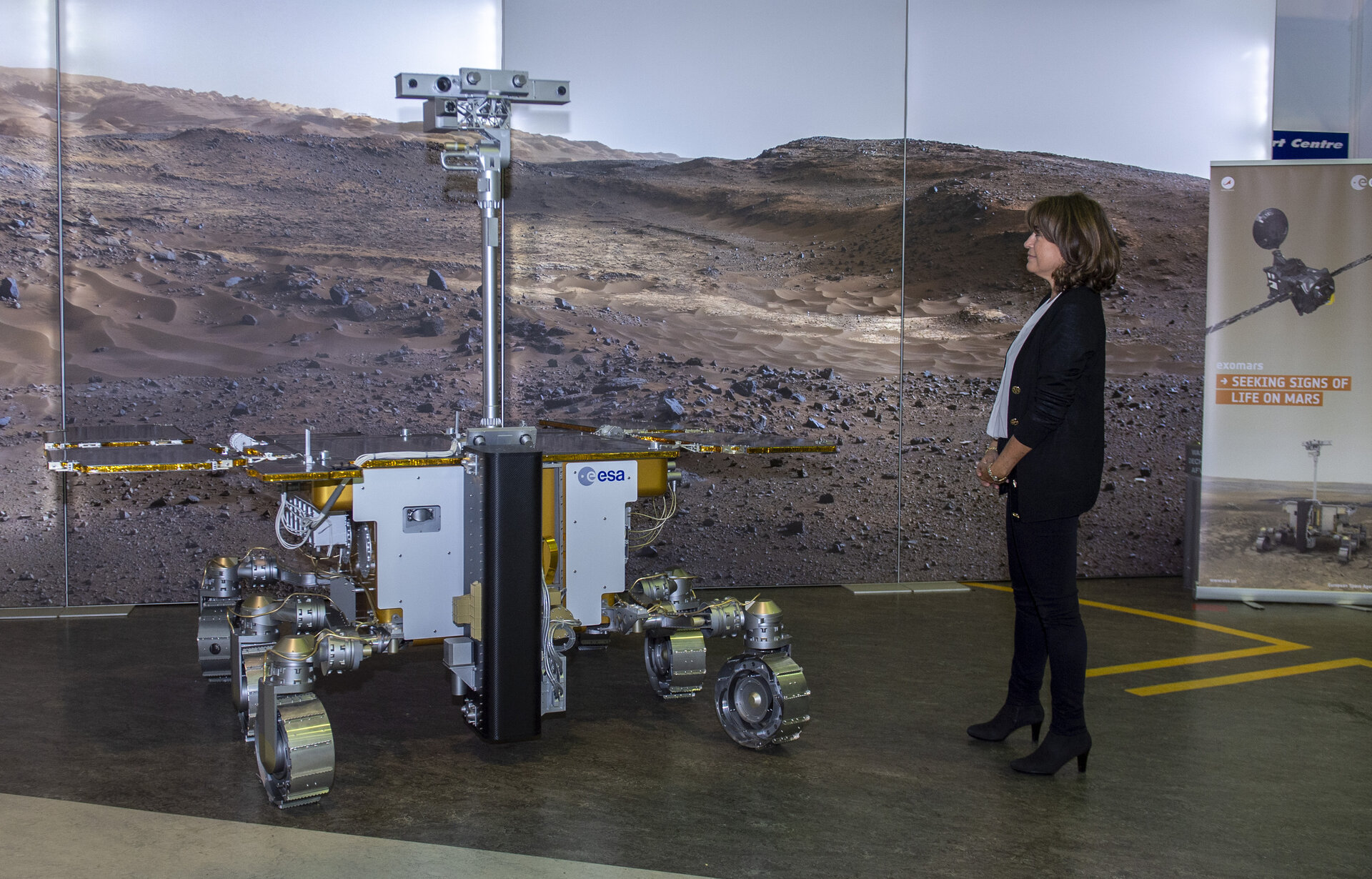 The work of Dr Rosalind Franklin (1920-1958) is well known for being central to the discovery of the iconic double-helix structure of DNA, the fabric of life as we know it on Earth. More than half a century later, she also inspired the name of ESA’s ExoMars rover, scheduled to launch in 2022 and start its exploration of the Red Planet in 2023. But the lasting imprint Rosalind left on her family also inspired her younger brother to name his own daughter Rosalind.

After learning that the rover had been named in honour of her aunt – the result of a public competition led by the UK Space Agency – and also sharing the same name, Rosalind Franklin reached out to ESA, curious to learn more about the mission. Last month, she visited ESA’s technical centre in the Netherlands and is pictured here meeting the 1:1 scale model of the Rosalind Franklin ExoMars rover for the first time.

Rosalind said: “I was overwhelmed to see the rover and to meet the extraordinary scientists that have dedicated years to the development of the project, bringing it from concept to reality, and recognising my Aunt Rosalind’s contribution to science by naming it after her. It was truly moving and filled me with pride and appreciation. It was an amazing day of learning and discovery and I know she would feel so honored and full of admiration towards everyone involved.”

ExoMars mission experts were on hand to answer her questions and to explain more about how the rover will be driven across the martian surface, and the science experiments it will carry out. One of the unique aspects of the rover is its two metre long drill that will retrieve underground samples for analysis in its onboard laboratory, where it will be able to sniff out signatures of life past or present.

Just as scientific discovery is in the soul of the ExoMars programme, Dr Rosalind Franklin knew from a young age that she wanted to be a scientist. Devoted and determined, she followed her dream, graduating with a Natural Sciences degree from Cambridge University, UK, in 1941, and earning a PhD in physical chemistry in 1945. She became an expert in X-ray diffraction imaging, applied to studying the physical chemistry of coals, and later revealing the hidden secrets of DNA, RNA and viruses.

Her legacy lives on today in a number of ways: numerous scientific institutes carry her name – one example being in the Rosalind Franklin University of Medicine and Science in Chicago, U.S, that her niece is a trustee of. Next year her legacy will extend into space, and her adventurous spirit will be lived through the intrepid exploration of the Rosalind Franklin ExoMars rover as it discovers hidden secrets of the Red Planet.

The ExoMars programme is a joint endeavour between ESA and Roscosmos and comprises two missions: the first – the Trace Gas Orbiter – launched in 2016 while the second, comprising the Rosalind Franklin rover and Kazachok surface platform, is planned for 2022. Together they will address the question of whether life has ever existed on Mars. The TGO is already delivering important scientific results and will also relay the data from the ExoMars 2022 mission once it arrives at Mars in March 2023.