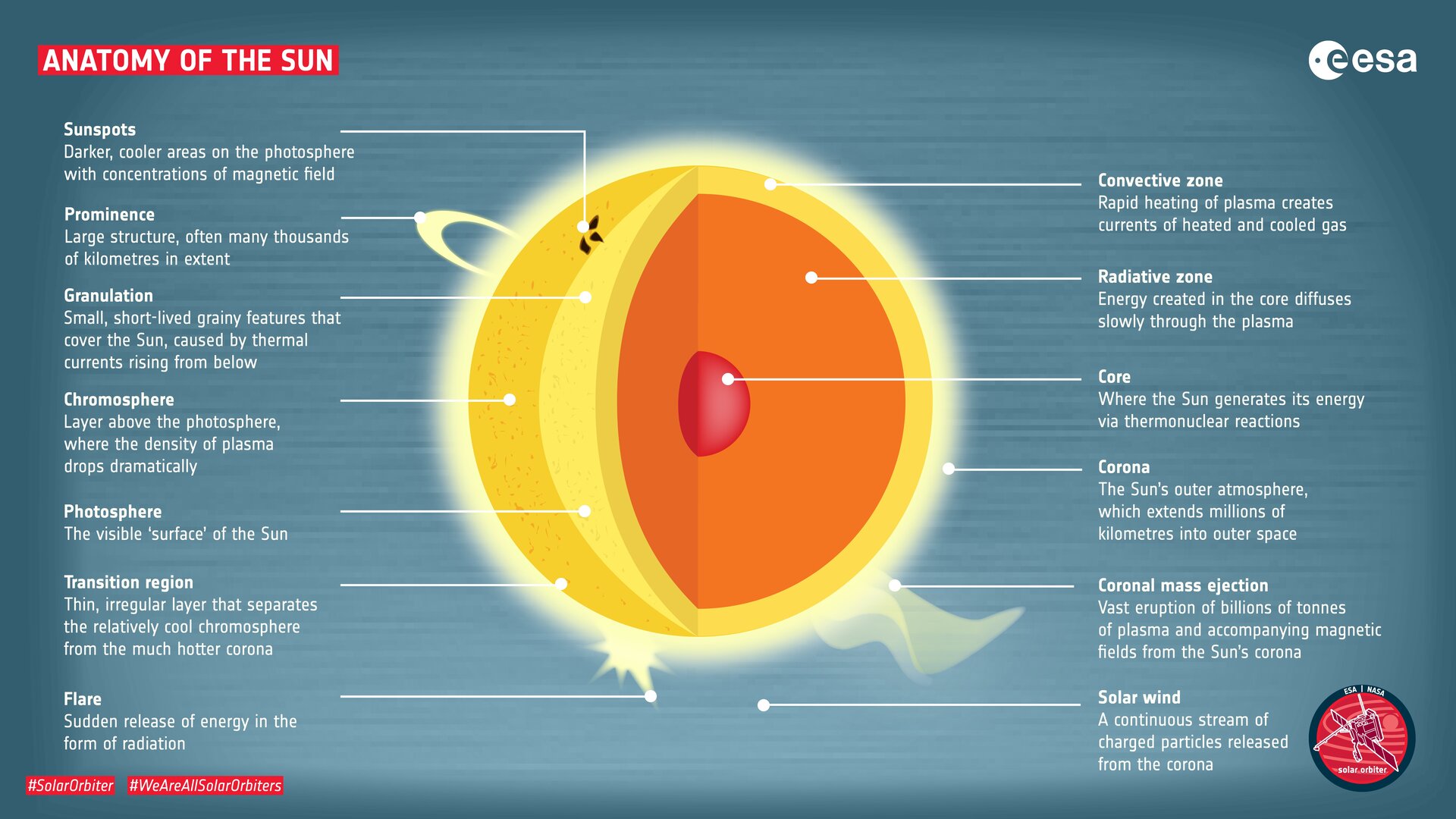 Anatomy of the Sun

Core
This is where the Sun generates its energy. The temperature in the core is around 15 million degrees Celsius. This, combined with the huge pressure and density of the plasma force hydrogen nuclei to fuse together, creating helium and releasing vast quantities of energy in the process. Every second, the Sun converts four million tonnes of matter into energy in this way, which begins a slow journey towards the surface.

Radiative zone
This is the layer above the core. Although not as dense as the core, the plasma is still packed so tightly in the radiative zone that convection cannot take place. Instead, the energy created in the core diffuses slowly through the plasma. It takes photons around 170 000 years to pass through the radiative zone: The photons travel at the speed of light, but can travel only a few millimetres at a time before they are absorbed by an atom and then re-emitted in any direction. At the top of the zone, the temperature is around two million degrees Celsius. At the base, next to the Sun’s core, the temperature is around seven million degrees Celsius.

Convective zone
This lies between the deeper, radiative zone and the photosphere. The convective zone is 200 000 km deep. While the top layer is the same temperature as the photosphere (between 4500 – 6000 degrees Celsius), the base of the convective zone reaches two million degrees Celsius. Plasma at the base of the zone is heated rapidly. This makes it buoyant and so it rises rapidly, creating a turbulent convection pattern, rather like a boiling pan of water – only 200 000 km deep and surrounding the entire Sun.

Photosphere
This is the visible ‘surface’ of the Sun. Almost all radiation from the Sun is emitted from this thin layer of several 100 km thickness, which lies at the upper boundary of the convection zone. It is where the energy generated in the core can finally move freely through space. The temperature of the photosphere varies from place to place but lies between 4500 and 6000 degrees Celsius.

Chromosphere
This is the layer above the photosphere, where the density of plasma drops dramatically. In general, the chromosphere is roughly 1000–2000 kilometres thick, with a temperature that rises from around 4000 to about 25 000 degrees Celsius. Spires of chromospheric gas, known as spicules, can reach up to a height of 10 0000 km.

Transition region
This is a thin, irregular layer that separates the relatively cool chromosphere from the much hotter corona. Across the transition zone, the temperature of the solar plasma soars to nearly a million degrees Celsius. While the convection zone and partly also the solar photosphere are dominated by flows which are capable of moving regions of strong magnetic flux around, the transition region and corona are dominated by the magnetic field which forces the plasma to move predominantly along field lines.

Corona
This is the Sun’s outer atmosphere and extends to millions of kilometres into outer space. It is most easily seen during a total solar eclipse. The plasma in the corona is extremely hot at more than one million degrees Celsius, yet is very rarefied. Its density is typically just one trillionth of the density of the photosphere. The solar wind originates in the corona.

Prominence
These are large structures, often thousands of kilometres in extent. They are made of tangled magnetic field lines that keep dense concentrations of solar plasma suspended above the Sun’s surface and often take the form of loops that arch up from the chromosphere. They can persist for several weeks or even months.

Solar flare
This is a sudden release of energy. A flare is usually created when the magnetic field lines that make sunspots transform themselves rapidly into more stable configurations. This is a bit like a stretched elastic band breaking and releasing all of its stored energy as it snaps back into position. The energy released by solar flares strongly influences the behaviour of the solar wind.

Sunspots
These are temporary features on the photosphere. They look like dark patches against the brighter region of the photosphere because they about 1000 degrees cooler and so do not emit so much light. They are caused by magnetic fields breaking through the photosphere of the Sun and cooling the gas there. Sunspots can be anything from a few tens of kilometres across to larger than 150 000 km.

Granulation
These are convective patterns that occur in the photosphere. Each granule is about 1000 km wide and consists of hot plasma rising in its centre. As it releases its energy into space, the plasma cools and this makes it flow to the sides of the granule and sink back down into the photosphere. Individual granules persist for about 20 minutes, after this new ones in slightly different places develop.

Coronal mass ejections
These are vast eruptions of billions of tonnes of plasma and magnetic fields from the Sun's corona. They travel out from the Sun at speeds of hundreds to thousands of kilometres per second, and if sent into the pathway of the Earth, can create geomagnetic storms.