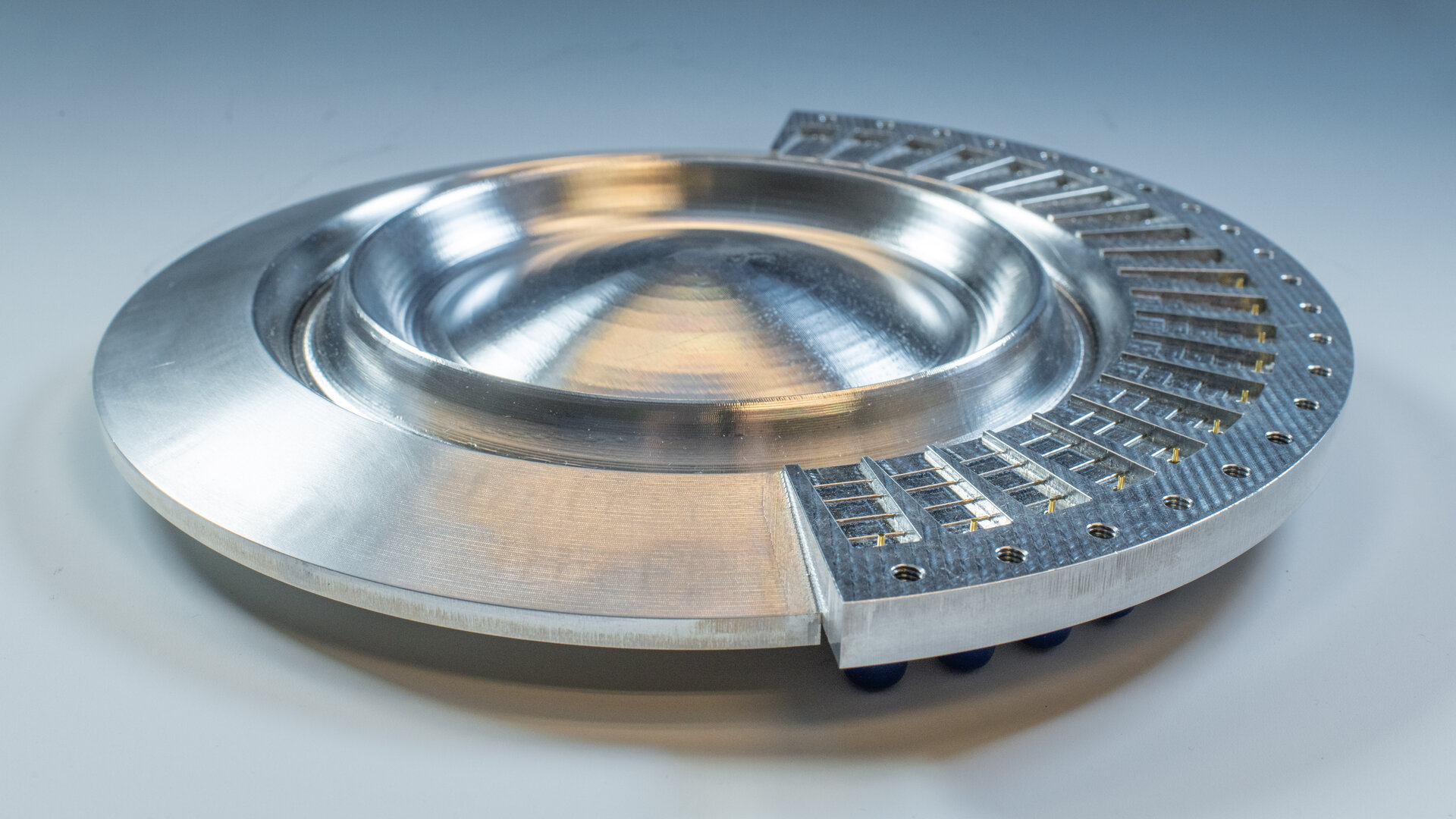 This novel ‘water drop’  antenna lens design for directing radio wave signals was developed by a pair of antenna engineers from ESA and Sweden’s Royal Institute of Technology, KTH.

In the same way that optical lenses focus light, waveguide lenses serve to direct electromagnetic radio wave energy in a given direction – for instance to send out a radar or a communication signal – and minimise energy loss in the process.

Traditional waveguide lenses have complex electrically-sensitive ‘dielectric’ material to restrict electromagnetic signals as desired, but this water drop waveguide lens – once its top plate has been added on – comes down purely to its curved shape directing signals through it.

The inventors of this new lens design, which received an ESA Technical Improvement award in February 2017, like to call it the ‘water drop’ lens because its shape resembles the ripples produced by a water drop at the surface of a fluid.

The lack of dielectrics in this shape-based design is an advantage, especially for space – where they would risk giving off unwanted fumes in orbital vacuum.

“The lens’s extremely simple structure should make it easy and cheap to manufacture, opening up avenues to a wide variety of potential materials such as metallised plastics,” explains ESA antenna engineer Nelson Fonseca.

“This prototype has been designed for the 30 GHz microwave range but the simplicity of its shape-based design also means it should be applicable to a broad frequency range – the higher the frequency, the smaller the structure, facilitating its integration”.

The idea came out of a brainstorming session during a conference, explains KTH antenna engineer Oscar Quevedo-Teruel: “We took the ‘Rinehart-Luneburg lens’, also called the geodesic lens, as our starting point. This is a cylindrical waveguide lens developed in the late 1940s, mostly for radar applications.

“We wanted the same performance, while reducing its size and height. So the idea we had was to retain the functional curvature of the original design by folding it in on itself, reducing its profile by a factor of four in the specific case of the manufactured prototype.”

This first prototype of a water drop lens was tested at KTH facilities, Oscar adds, to measure its radiation patterns, efficiency and gain: “While a conventional Luneburg lens might suffer from elevated dielectric losses, especially when used at higher frequencies, this design shows marginal signal loss thanks to its fully metallic design.”

Besides space applications, such as Earth observation and satellite communications on small satellites, this antenna has also attracted the attention of non-space companies. The Ericsson company is looking into using the compact design for the fifth generation mobile phone networks. The concept could also be used for guidance radars in the next generation of self-driving cars.