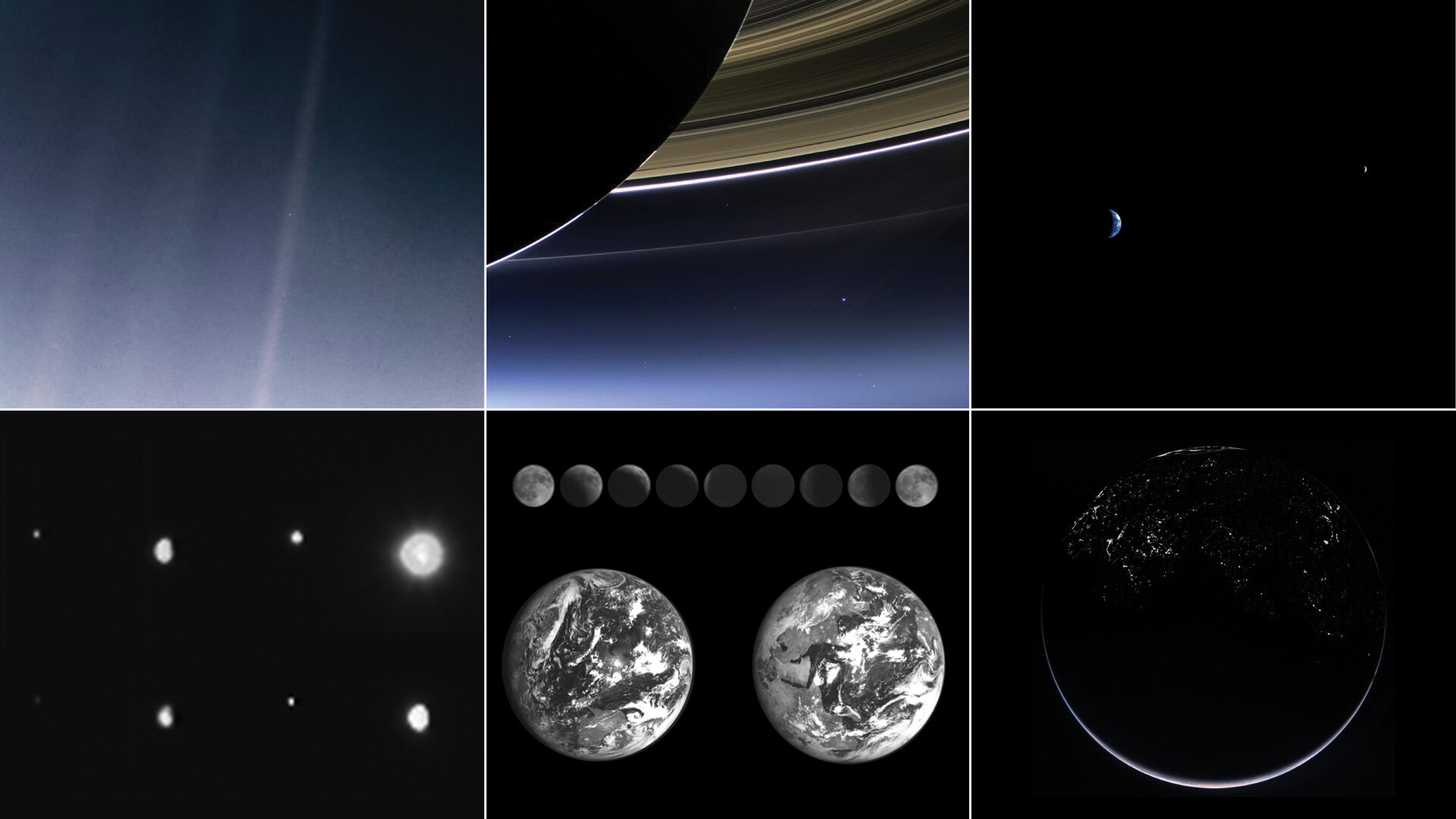 Spacecraft look back on our cosmic home

Thirty years ago, on 14 February 1990, NASA’s Voyager 1 had completed its exploration of the gas giants Jupiter and Saturn and was just about to venture even farther, towards the edge of our Solar System. There, 6 billion kilometres away from the humans who had conceived the spacecraft, built it and launched it into space, Voyager 1 turned, paused, and lingered, to borrow a phrase from Rainer Maria Rilke, and took one last look back at our home planet.

The idea of astronomer and science communicator Carl Sagan, this photo of our “Pale Blue Dot” (top left in this mosaic) became a global sensation, providing a unique perspective on Earth and its place in the Universe. The 30-year-old icon also serves as motivation to reflect on the current state of our planet and as an inspiration for future generations.

Voyager 1 is one of but a handful spacecraft that dared to journey to the outskirts of our planetary system, but many more space science missions over the past three decades have continued the tradition, looking back and imaging Earth from a variety of orbital locations.

On 19 July 2013, the NASA/ESA/ASI Cassini spacecraft captured the silhouette of Saturn and its rings, along with planet Earth and our Moon, in the same frame (top centre in this mosaic). The image, taken 1.44 billion kilometers from home, was part of the ‘Wave at Saturn’ campaign, inviting people around the world to join together in social events and virtually ‘wave’ at the spacecraft to be featured in the iconic shot.

Ten years before, on 3 July 2003, ESA’s Mars Express spacecraft was on its way to Mars and was briefly pointed backwards to obtain a view of the Earth-Moon system from a distance of 8 million kilometres. This image (top right in this mosaic) is the first picture of planetary objects obtained by the Mars Express’s High Resolution Stereo Camera (HRSC), enabling scientists to start calibrating the camera that would later deliver stunning pictures of the Red Planet.

Elsewhere in the Solar System, the Venus Monitoring Camera on ESA’s Venus Express mission opened its eye and took several images of Earth and the Moon from 3.5 million kilometres away (bottom left in this mosaic). The images, taken during the spacecraft commissioning only two weeks after launch, in November 2005, show Earth and the Moon at different wavelengths – infrared (upper and lower left), visible (upper right) and ultraviolet (lower right).

Closer to home, SMART-1, ESA’s first mission to the Moon, captured a series of unique images of our home planet Earth and the Moon during a total lunar eclipse on 28 October 2004. The images (bottom centre in this mosaic) were taken when the spacecraft was about 290 000 km away from Earth and about 660 000 km from the Moon.

Finally, ESA’s Rosetta mission, which rendezvoused with Comet 67P/Churyumov-Gerasimenko and landed a probe on its surface in 2014, took several opportunities to image our home planet during its three Earth flybys in 2005, 2007 and 2009. One of them, a composite of four images combined to show the illuminated crescent of Earth and the cities of the northern hemisphere, is shown at the bottom right of this mosaic.

The images were acquired with Rosetta’s OSIRIS Wide Angle Camera (WAC) during the spacecraft’s second Earth flyby on 13 November 2007. The image showing city lights in the northern hemisphere was taken with about 2 hours before the spacecraft’s closest approach to Earth, about 80 000 km above the Indian Ocean, while the image of the illuminated crescent, seen around Antarctica, was taken as Rosetta was about 75 000 km from Earth.