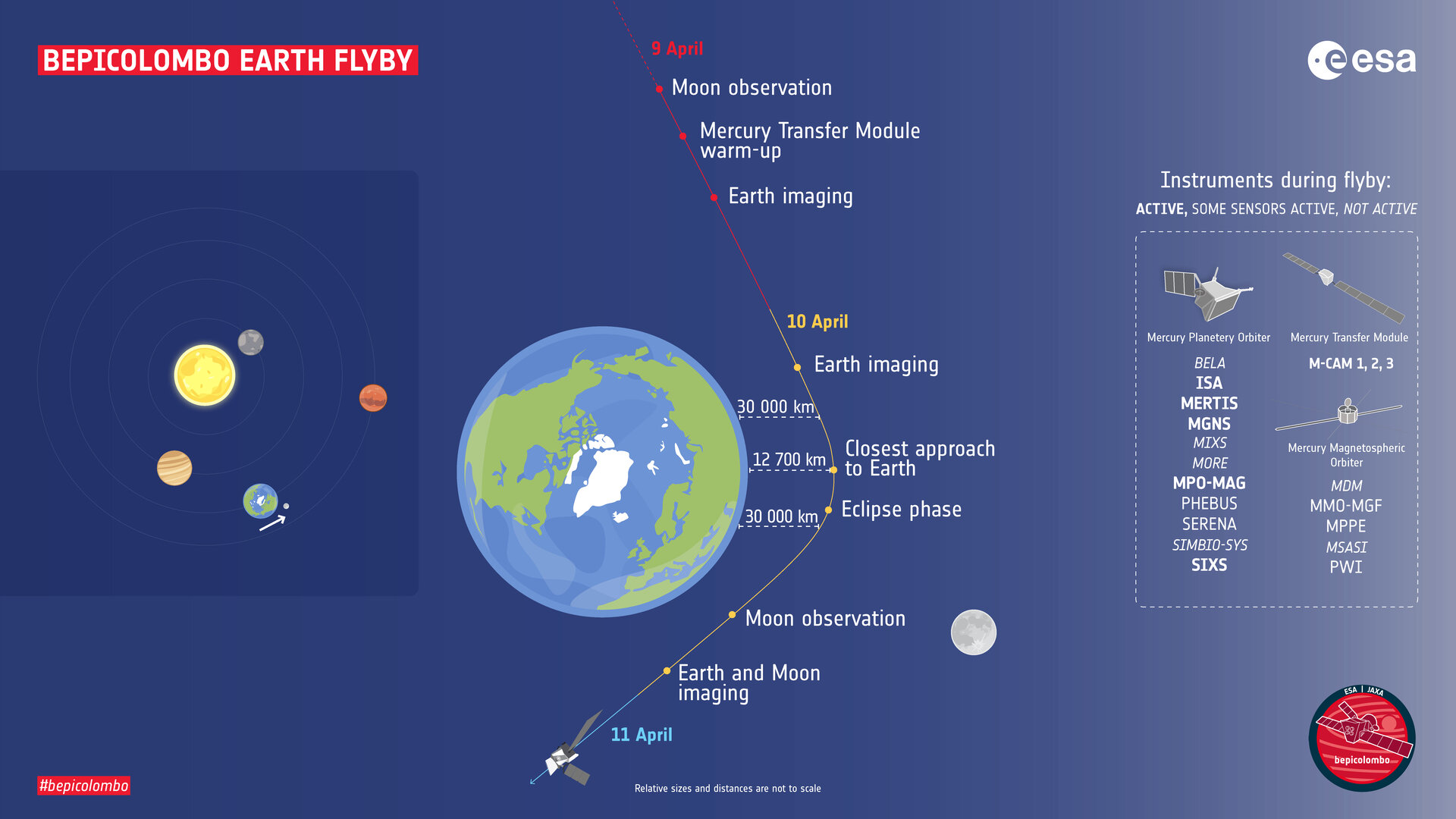 BepiColombo's first – and only – Earth flyby

On 10 April, BepiColombo closes in on Earth for a gravity-assist flyby on its way to its final destination, Mercury. At closest approach, 06:24:58 CEST, the spacecraft flies only 12 700 km above the surface of our planet.

This graphic provides a simplified overview of the key operations that will take place before, during and after the flyby, such as the warm up of the Mercury Transfer Module (MTM) on 9 April to prepare for the 34-minute eclipse phase following closest approach, between 07:01 and 07:35 CEST, during which the spacecraft will be in Earth's shadow and thus not receiving any sunlight.

Several instruments and sensors on the two science orbiters that make up the mission – the Mercury Planetary Orbiter (MPO), the Mercury Magnetospheric Orbiter (Mio) – will be switched on during the flyby, as indicated on the right side of the graphic. The data gathered during the flyby include images of the Moon and measurements of Earth’s magnetic field, which will be used to calibrate the instruments.

The three monitoring cameras mounted on the MTM are also programmed to take several 'selfies' of the spacecraft with Earth upon approach and departure.

A simulated view of the flyby in an ‘inertial frame’ – in which the spacecraft is moving in relation to a still Earth – is available here.

Find out more about BepiColombo's Earth flyby, details of the gravity-assist manouvre and how to observe the flyby in the sky.

BepiColombo, a joint mission of ESA and the Japan Aerospace Exploration Agency (JAXA), is on a seven-year cruise to Mercury, the smallest and innermost planet of the Solar System. Launched in October 2018, BepiColombo follows an intricate trajectory that involves nine gravity-assist flyby manoeuvres. In addition to the flyby at Earth, BepiColombo will perform two flybys at Venus and six at Mercury, its target planet. The manoeuvres slow down the spacecraft as it needs to constantly brake against the gravitational pull of the Sun in order to be able to enter the correct orbit around Mercury in 2025, ahead of commencing science operations in early 2026.