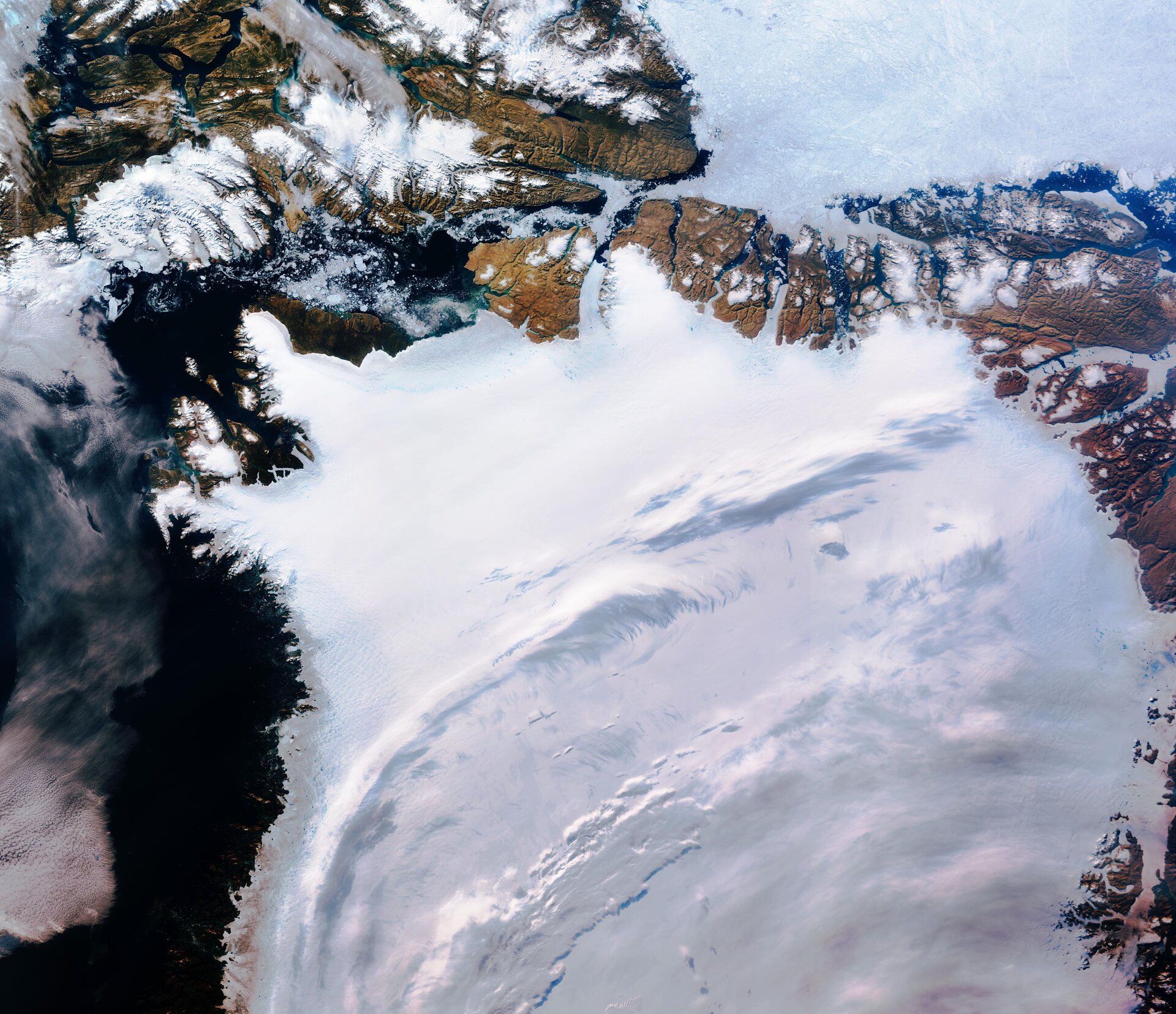 Northwest Greenland is featured in this icy image captured by the Copernicus Sentinel-3 mission.

Lying in the North Atlantic Ocean, Greenland is the world’s largest island and is home to the second largest ice sheet after Antarctica. Greenland’s ice sheet covers more than 1.7 million sq km and covers most of the island.

Ice sheets form in areas where snow that falls in winter does not melt entirely over the summer. Over thousands of years, layers of snow pile up into thick masses of ice, growing thicker and denser as the new snow and ice layers compress the older layers.

Ice sheets are constantly in motion. Near the coast, most of the ice moves through relatively fast-moving outlets called ice streams, glaciers and ice shelves.

In the top centre of this image, captured on 29 July 2019, the Petermann glacier is visible. Petermann is one of the largest glaciers connecting the Greenland ice sheet with the Arctic Ocean. Upon reaching the sea, a number of these large outlet glaciers extend into the water with a floating ‘ice tongue’. Icebergs occasionally break or ‘calve’ off these tongues.

In this image, sea ice and icebergs can be seen in the Nares Strait – the waterway between Greenland and Canada’s Ellesmere Island, visible top left in the image.

On the tip of Ellesmere Island lies Alert – the northernmost known settlement in the world. Inhabited mainly by military and scientific personnel on rotation, Alert is about 800 km from the closest community, which is roughly the same distance from Alert to the North Pole.

Scientists have used data from Earth-observing satellites to monitor Greenland’s ice sheet. According to a recent study, both Greenland and Antarctica are losing mass six times faster than they were in 1990s. Between 1992 and 2017, Greenland lost 3.8 trillion tonnes of ice – corresponding to around 10 mm contribution to global sea-level rise.

Melting ice sheets caused by rising temperatures and the subsequent rising of sea levels is a devastating consequence of climate change, especially for low-lying coastal areas. The continued satellite observations of the Greenland ice sheet are critical in understanding whether ice mass loss will continue to accelerate and the full implications of this anticipated change.