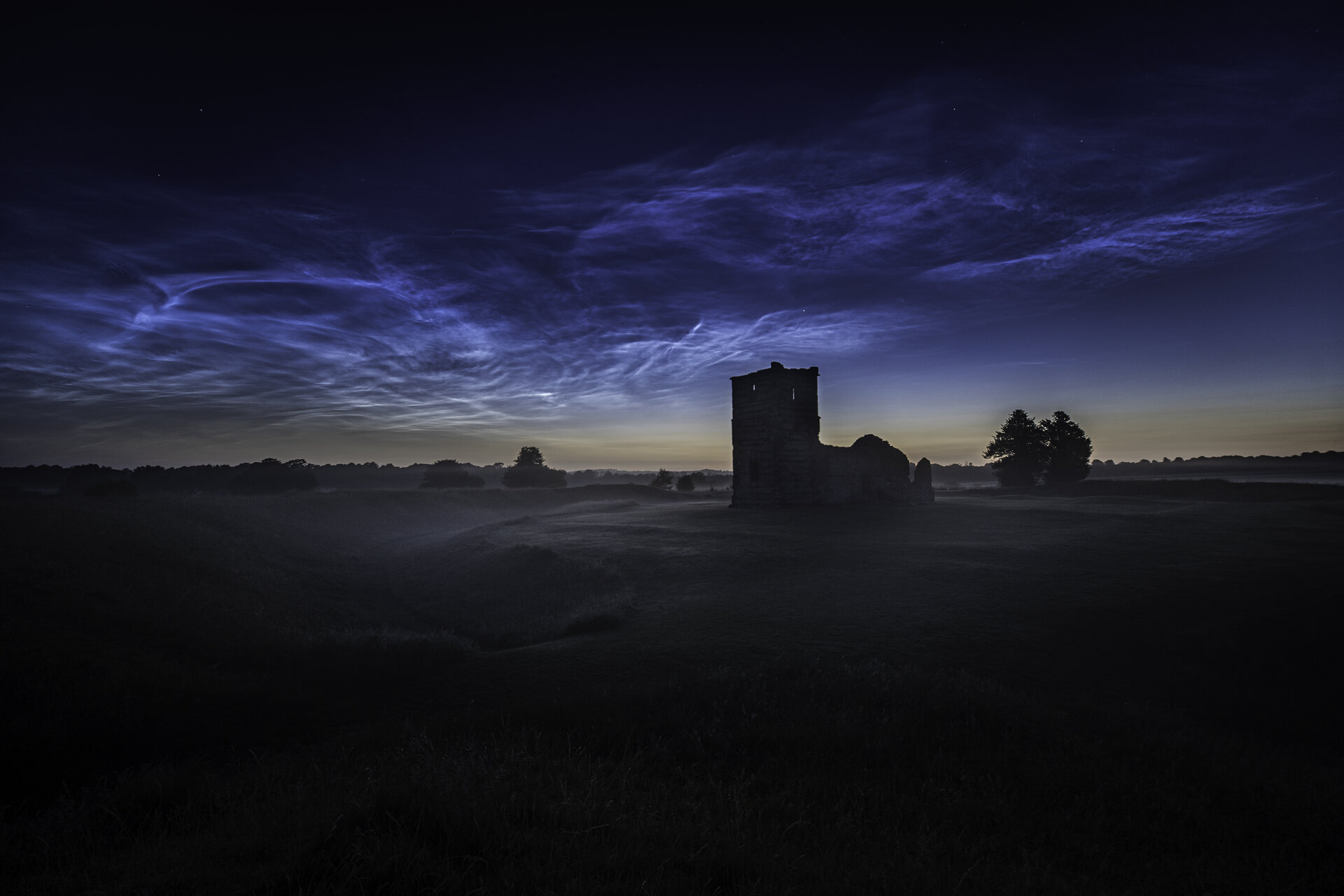 A summer phenomenon, these rare clouds are visible when the Sun is below the viewer’s horizon, shining light on these tenuous wisps. First mentioned in 1885, just two years after the Krakatoa volcanic eruption, one of the most destructive on record, they were once considered a rare meteorological phenomenon. The clouds have been sited more frequently over the past few years, linked by many to increased greenhouse gas emissions.

Thanks to a dedicated network of NLC trackers, including live space weather updates, Czech-based NLC webcam observations and a Facebook group, Ollie got a great night’s worth of photography.

“It was an excellent night of shooting, arriving at location in the evening already greeted by noctilucent clouds better than I had previously seen in the south of England,” says Ollie.

Taken between 2 and 2:50am, the clouds lend a ghostly glow to the 12th century church in the middle of a Neolithic henge monument. “The electric blue complemented the misty landscape and eerie structure,” Ollie says of this picture-perfect moment.

But what exactly is a noctilucent cloud?

NLCs form in the mesosphere, the upper and more complex part of Earth’s atmosphere. While the lower atmosphere warms during this period, atmospheric circulation pushes air upwards, where it expands and cools. This means the mesosphere is cold enough for water vapour to freeze into clouds of ice crystals that form on meteoric dust and other particles found at the so called edge of space.

The rarefied atmosphere at these altitudes is electrically charged and some of these charges are transferred to the ice crystals, creating a so-called dusty plasma in the region.

Considered the fourth state of matter, plasma – or electrically charged gas – is ubiquitous in the universe. In order to study dusty plasmas, scientists have taken plasma research to low Earth orbit, where weightlessness allows particles to be suspended and more easily studied.

The Plasma Kristall-4 experiment, a joint European-Russian endeavour since 2006, has just run its 10th campaign on the International Space Station. The recipe is simple: apply electrical current to create a plasma-filled tube and coax dust particles to behave like atoms and form three-dimensional crystal structures. By adjusting the voltage across the experiment chamber, scientists can tailor their interactions and observe each particle as if in slow motion. Using PK-4, researchers across the world can follow how matter melts, how waves spread in fluids and how flows change at the atomic level.

A team of scientists has already made use of the technical knowhow gained from developing the ISS experiment, to build plasma devices that disinfect wounds at room temperature. This revolution in healthcare has many practical applications, from food hygiene to treatment of skin diseases, water purification and even neutralising bad odours.

As for these noctilucent clouds, they are visible from Earth and also in space. ESA astronauts Luca Parmitano and Tim Peake also took pictures of the clouds during their missions on board the International Space Station.