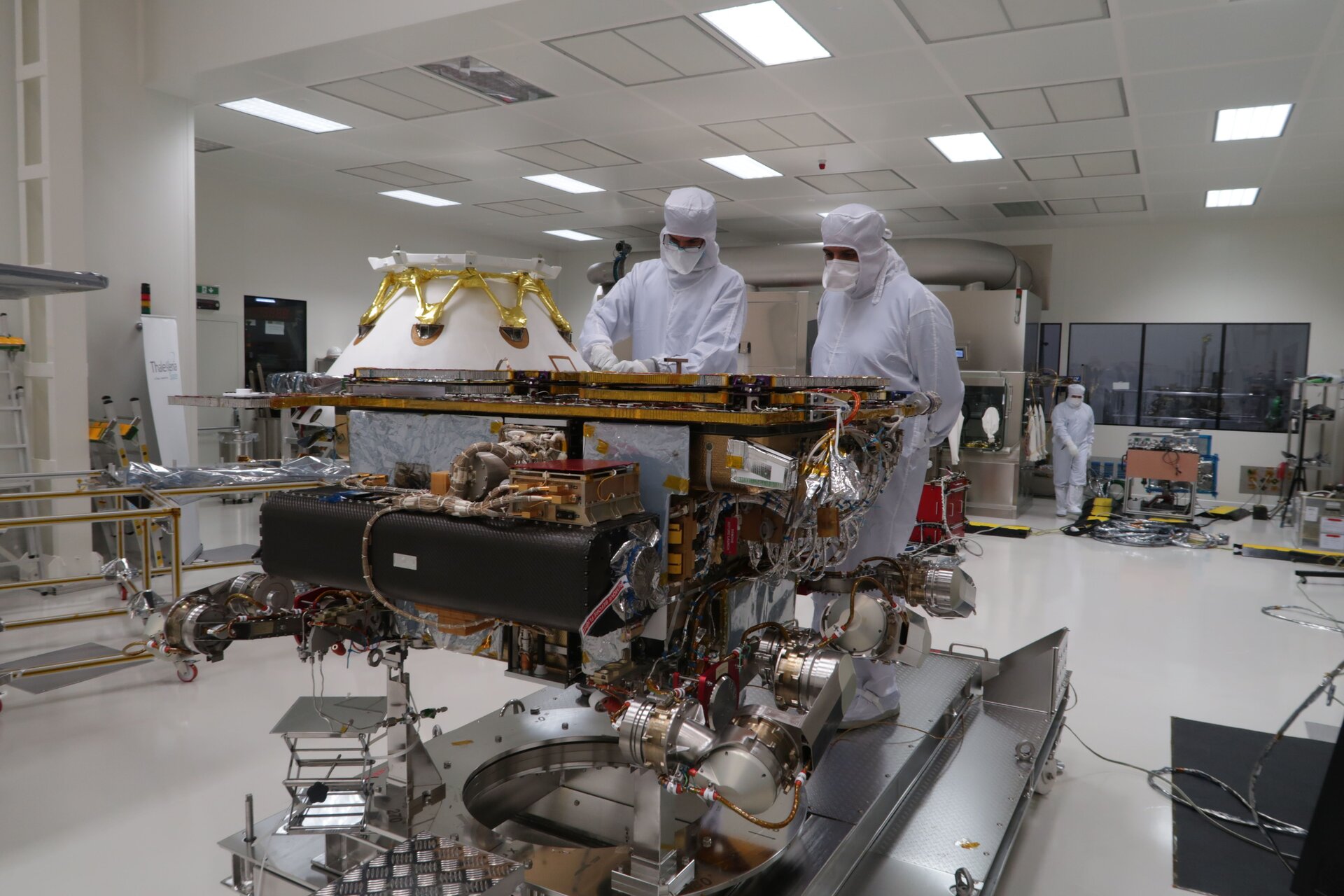 Last Sunday night a long, heavy truck hit the road escorted from Italy with a precious cargo. While most of the citizens in Turin prepared to enjoy their dinner, several modules of the ExoMars spacecraft left the Thales Alenia Space facilities. Next stop: Cannes, France.

The journey took less than a day. Besides stringent controls in dedicated clean rooms and tents – amongst the cleanest places on Earth – to avoid any biological contamination from Earth to Mars, Russian and European teams took a number of precautionary measures to minimise the risk of spreading the Coronavirus.

Workers remained fully shrouded within ‘bunny suits’ to control any kind of contamination during the packing of the ExoMars elements before shipment. In this image, two engineers work on ESA’s Rosalind Franklin rover with its solar panels and drill folded.

The white capsule with golden legs in the background corresponds to the carrier module integrated with the Russian surface platform, dubbed Kazachok. These two elements will reunite with the rover in Cannes at the end of October.

The microbiological samples taken after rigorous cleanliness procedures showed that the contamination levels were within the requirements for a safe landing on Mars.

Engineers will be busy with a series of tests in the next months. The whole spacecraft will undergo thermal, vacuum and acoustic tests during the next months in France. Coming up is the deployment of the solar panels that will power up the Rosalind Franklin rover on Mars.

Teleworking is nothing new to the ExoMars spacecraft and teams. There will be some remote operations in France before the year ends. Rosalind Franklin will be commanded from the Rover Operations Control Centre (ROCC) at the ALTEC premises in Turin, Italy, to rehearse cruise and deployment manoeuvres once on the surface of Mars.

ExoMars leaves behind an intense period of testing in Italy since April, from health checks to assembly, maintenance operations and leak tests. Fasteners have been added to the solar panels of the rover to increase robustness during the unfolding and surface operations on the Red Planet.

Rosalind Franklin is fitted with a drill – a first in Mars exploration – to extract samples down to a maximum of two metres, where ancient biomarkers may still be preserved from the harsh radiation on the surface, and hosts a sophisticated laboratory to analyse the samples on Mars.

Both drill and laboratory have been extensively tested using soil similar to that expected on Mars and under conditions representative of the martian environment.

The ExoMars programme is a joint endeavour between ESA and the Russian State Space Corporation, Roscosmos.