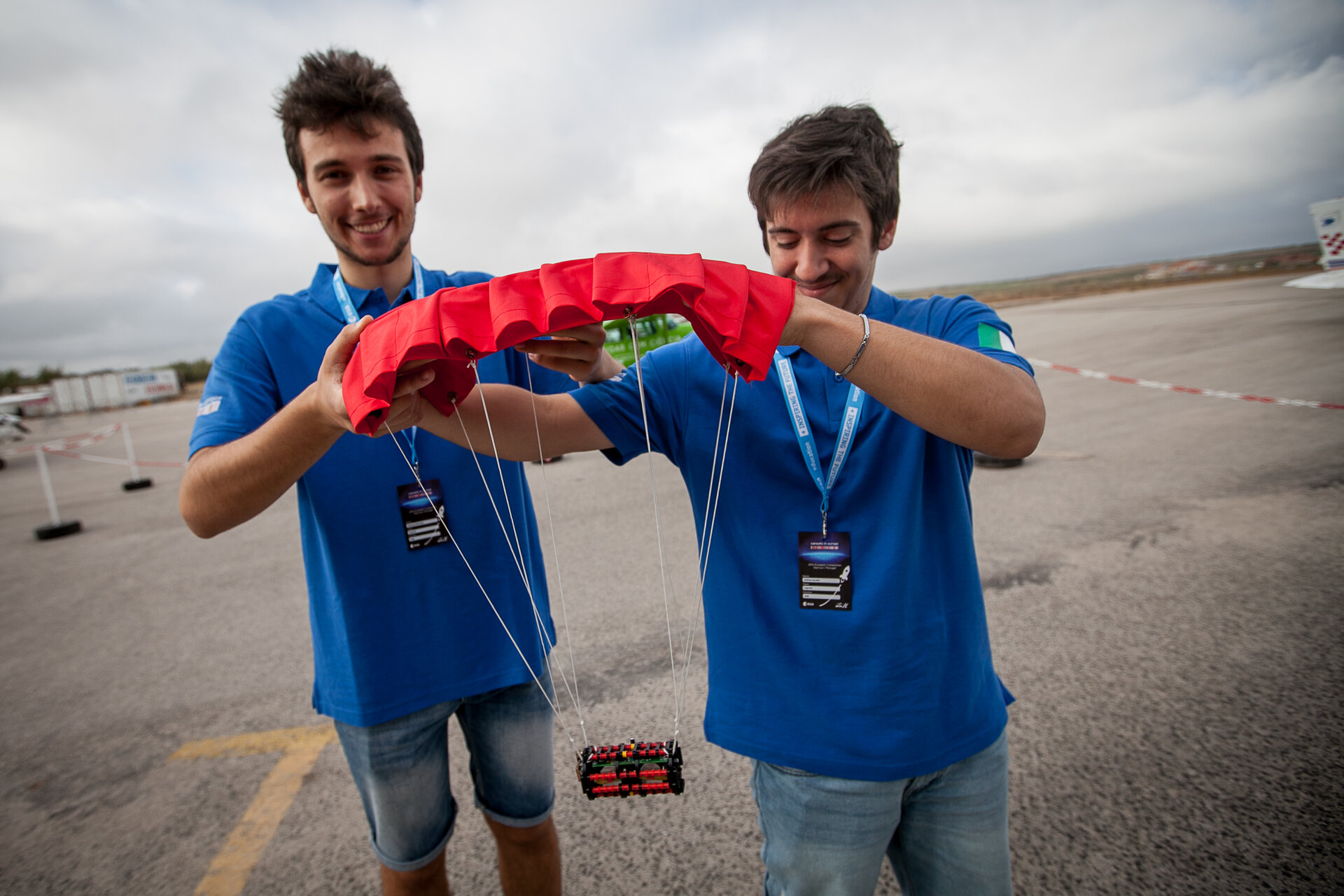 Nobody said it was going to be easy. But after four days of non-stop competition between brilliant student teams, the ENTA SAT2 team from Portugal emerged as the winners of the 2016 European CanSat competition. URSinvestigators team from Germany and ConfeyCan team from Ireland ranked second and third, respectively.

Between 22-26 June 2016, one hundred secondary school students and their teachers representing 14 teams from 14 different ESA member states took part in the European CanSat competition launch campaign. This was the culmination of a long and arduous journey into the world of space exploration.

A CanSat is a miniature ‘satellite’, designed to fit into the volume and shape of a soft drink can. They are fully operational, and include all the major subsystems found in a satellite, such as power, sensors and a communications system.

The CanSat is then launched to an altitude of a few hundred metres by a rocket and its mission begins. It must carry out a scientific experiment and achieve a safe landing.

ESA’s Education Office has been inviting secondary school students to take part in the European CanSat competition since 2010. It is part of ESA’s initiative to inspire young people in pursuing a career in the STEM (science, technology, engineering and mathematics) fields, with the ultimate goal of ensuring the availability of a highly qualified workforce in the space industry of the future.

After months of work and preparation, the 2016 finalists gathered at the Aerospaco AeroClub of Torres Vedras, Portugal, on 22 June to begin the launch campaign. Each team’s first task was to present their project in under 5 minutes to an international jury of space experts. Not only did they have to present the technical aspects of their project, they also had to do in it English, which for most of the team was not their native language.

This was necessary, however, because the international language of the aerospace industry is English, and these students will be applying for jobs in that sector in just a few years’ time. So building their presentation skills is vital.

As if that wasn't nerve-wracking enough, then the teams had to watch their satellites being dropped from a light aircraft to test their parachute systems.

Aerospaco’s Cessna cruised to an altitude of 100m approximately and the test began. As the CanSats fell, some teams suffered what can only be described as massive setbacks – their creations plummeted to the ground due to tangled lines or other failures in their parachutes. This meant working through the night to recover broken parts and fix electronic failures before launching the very next day.

Two by two, the CanSats were placed into the 5-finned Intruder rocket and launched to an altitude of more than 1000m in less than 10 seconds. The launcher reached a maximum velocity of 500km/h and produced forces equivalent to 20 times the pull of Earth's gravity. This harsh ascent took its toll and rendered some CanSats inoperable. Due to weather conditions, some of the CanSat had to be released from the plane.

Those that did perform beamed back valuable information to waiting ground stations. The teams had built different receiving antennae, some were even streaming data to the internet, giving their friends back at school the opportunity to see what was happening.

Once the CanSats had returned to Earth, data analysis took priority. There was no time to delay. All the data and scientific conclusions had to be presented to the jury the following day.

One by one the teams presented their stories. Some were accounts of success, others failure but all had learned that launching CanSats and getting meaningful, interpretable data at ground stations is no easy task.

The judges deliberated for more than 2 hours. The teams were ranked on several criteria ranging from technological achievement, innovative ideas, documentation throughout the competition, presentation skills and general attitude towards their project.

In the end the results of 2016 European CanSat competition are:

1st prize: ENTA Team SAT2 from Portugal designed an innovative capsule to hold the electronics of the CanSat with an optimised and improved ground control. They created a monitor and control panel and studied the solar light irradiance to evaluate photovoltaic potential by integrating light sensors.

2nd prize: URSinvestigators team from Germany measured relative humidity and designed their CanSat to collect air samples during its fall with an innovative triggering mechanism. Once on the ground, the air samples were analysed using a portable gas chromatograph with helium as carrier gas.

3rd prize: ConfeyCan team from Ireland attempted a two-way communication with the CanSat using 2 different antennas. The strength of the Solar radiation was analysed from flexible solar panels wrapped around the CanSat and proved to be a compact and robust design.

All teams are now completing their CanSat Final Paper, to be delivered in July. This last document follows the presentation of a scientific paper including an abstract and a description of the project including the results of each CanSat mission.