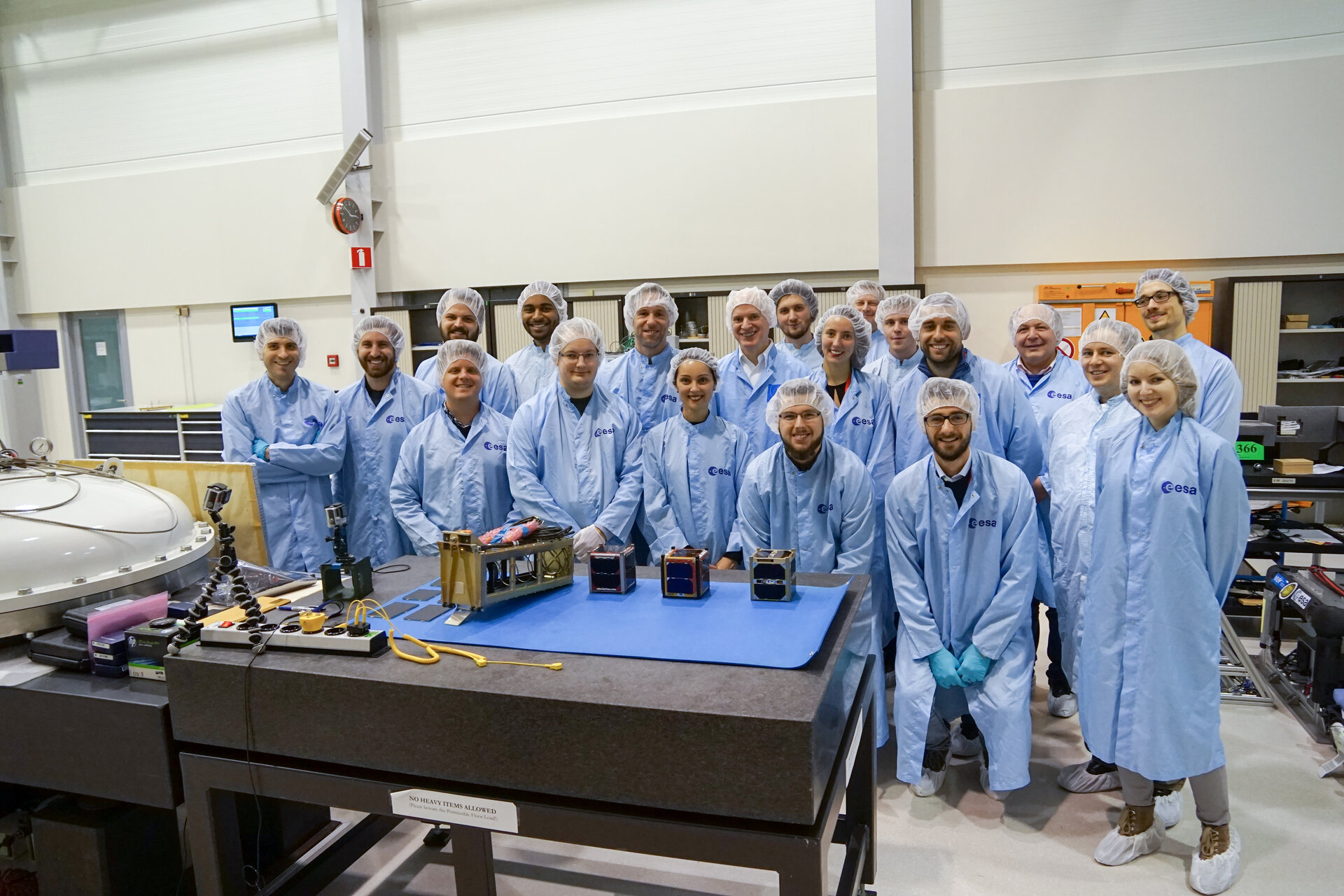 The ESA Fly Your Satellite! 2016 edition has just entered its final exciting phase - launch preparation-  as the three selected student teams fit their CubeSats in the orbital deployer which will eject the satellites into orbit after launch.

The integration campaign was performed by the enthusiastic students on 14 and 15 March at ESA’s European Space Research and Technology Centre (ESTEC) in the Netherlands, under the careful guidance of their university professors and ESA’s Education staff.

Fitted into the deployer, the three student CubeSats - OUFTI-1 from the University of Liege, Belgium, e-st@r-II from the Polytechnic of Turin, Italy, and AAUSAT4 from the University of Aalborg, Denmark - are now ready to be shipped to the European spaceport (CSG) in Kourou, French Guyana. In Kourou the students will participate in the launch preparation campaign - an experience of a lifetime!

Launch of the CubeSats is currently planned for  22 April 2016, as they will be launched as piggyback satellites on a Soyuz launcher together with main passenger Sentinel-1B, an Earth observation satellite, as well as two other European satellites.

The integration of the CubeSats in the orbital deployer is an important stepping stone of the professional engineering process that - in the last couple of years - has brought the students from designing and building their satellites at their universities, to testing it at ESA’s test facilities, and to undergo several technical reviews, which will eventually lead them to launch and culminate their unique learning experience.

The OUFTI-1,  e-st@r-II, and AAUSAT4 teams arrived at ESTEC on 14 March and were called one by one into the clean room of the Metrology Laboratory for the pre-integration checks. Under the supervision of Tyvak International, the provider of the deployer, they first performed a visual inspection to make sure that there was no unexpected damage of the satellite or unintentional deployment of the antennas during the transportation from their home universities to ESTEC.

On 15 March the three CubeSat teams participated in the so called Integration Readiness Review, a formal event chaired by the Fly-Your-Satellite! programme manager, Piero Galeone, with the participation of the representatives of Tyvak International. The purpose of the review was to make sure that all inspections and test activities performed on the first day were technically successful, that the satellites were ready to proceed to the launch campaign, and to give formal go-ahead for the integration of the three small satellites into the deployer.

Following the successful outcome of the review, Tyvak International installed the three CubeSats in the orbital deployer with the help of one student representative per team. Finally, a last visual inspection of the CubeSats’ orbital deployer was performed to confirm the correct integration of each CubeSat.

Happy students then left ESTEC to temporarily return to their homes, ready to re-encounter their satellites in Kourou later in March, for the official kick-off of the launch campaign.