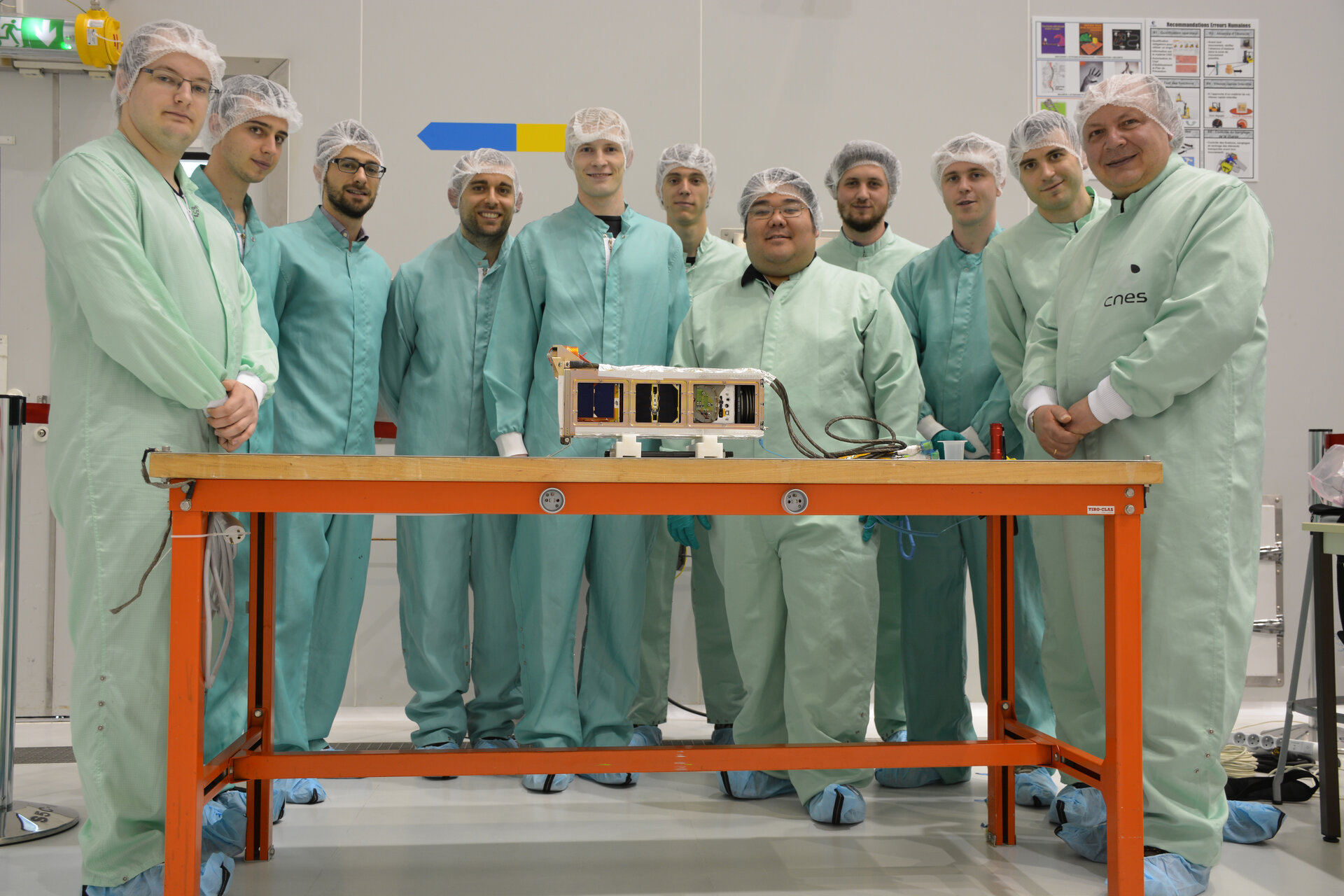 Once upon a time, only world superpowers could launch satellites. Now university students can do it as well! The ESA Education Office Fly Your Satellite! (FYS) programme is designed to train the next generation of aerospace professionals. This year’s campaign is entering a critical stage,  as the three chosen student teams get their satellites ready for launch in April.

The satellites themselves are CubeSats. This class of small satellites have helped revolutionise access to space. Made of standard components, as the name suggests they come in modular dimensions of just 10x10x10cm in size. As part of the FYS! Programme, three university teams were chosen by ESA’s Education Office and have been working hard to perfect their spacecraft.

OUFTI-1 from the University of Liege, Belgium, will test a new communications subsystem; e-st@r-II from the Polytechnic of Turin, Italy, will demonstrate an attitude control system using measurements of the Earth’s magnetic field; and AAUSAT4 from the University of Aalborg, Denmark, will operate an automated ocean vessel identification system.

The students themselves have been made to work to professional standards, giving them the experience of what it is like to work on a real space mission. This helps build the expertise that Europe needs to continue as a world leader in space.

The FYS! CubeSat teams met in the early hours of 29 March for the security check-in procedures necessary to access the Centre Spatial Guyanais. They were then given the mandatory safety  briefing offered to all those that work on the CSG site. Then they set to work preparing their satellites contained  in their P-POD – the device that will release them into orbit after launch. Meanwhile, the details of the fit-check operations were coordinated among all involved parties, and the mechanical and electrical fit-checks were performed successfully, confirming that the P-POD’s mechanical and electrical interfaces fit perfectly with its mounting location onboard the Soyuz launcher. The lateral access ports of the P-POD were then removed, and all 3 CubeSats were inspected successfully by all student teams.

The day ended with an agreed working plan for the upcoming three working days and a post fit-check meeting with Arianespace.

One of the students commented: “It is amazing to learn that we are in one of the huge high bay clean rooms at CSG with our small satellites, the same room that is used for the final launch preparation activities of big satellites. To see the CubeSat being readied for launch directly  at the launch site is worth the long and tiring journey to Kourou.”

On 30 March the students removed the so-called Remove Before Flight pins and successfully verified that the CubeSats were ready for launch. Afterwards, the lateral access ports of the P-POD were put back in place. The next time the students will have contact with their respective CubeSats will be through the communication link after the satellites are deployed into orbit. The next activities consist in completing the application of a special thermal-optical tape on the outside of the P-POD, which will ensure the unpowered CubeSats are shielded from extreme thermal radiation during the launch phase. Finally, the planning for the next weeks will consist in integrating the P-POD with the rest of the launcher.

Launch is scheduled for 22 April, when the Soyuz rocket will carry the satellites into space. The student teams will be in Europe, at their university, where they will be ready to receive the first radio signal of their CubeSats from space.

"We are now  entering the most critical phase of the mission. Everything must be made ready for orbit. For the teams, it is the most intense but also the most rewarding time - the experience of a lifetime. They have designed and built their satellite, and have interacted in long reviews, meetings, and test sessions with ESA specialists to confirm the suitability of their satellites to perform the mission for which they were designed.  Now these students are experiencing the full immersion of working at Europe’s Spaceport in Kourou - the equivalent of 100% pure adrenaline that will accompany them for many years.  I am certain that decades after they start working as space professionals they will still have strong memories of their visit at Europe’s Spaceport, and of their being a part of an important launch!” said Piero Galeone, Head of Tertiary Education at ESA.

'Fly Your Satellite!’ is an ESA educational programme run in close collaboration with European universities and aimed at complementing students’ academic education. It provides university students across Europe with the unique opportunity to gain practical experience in key phases of a challenging, real satellite project – a CubeSat – from integration, test and verification, launch and operations. Through Fly Your Satellite! and other educational projects, ESA inspires, engages and better prepares students to undertake scientific and technological careers, particularly in the space sector. Fly Your Satellite! is part of the newly established ESA Academy programme.