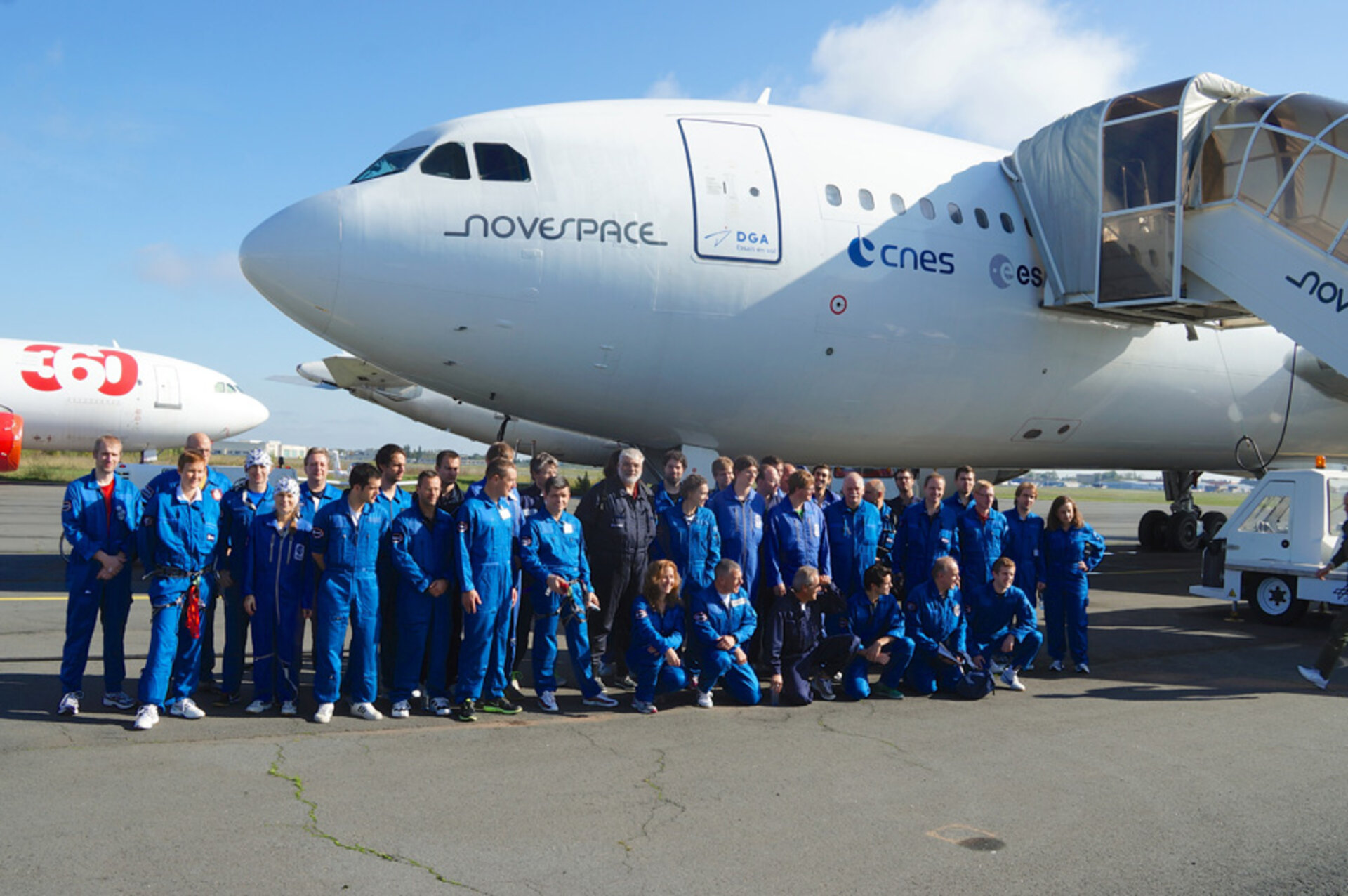 This year’s "Fly Your Thesis!" campaign ended on 25 October. For three days, a specially equipped aircraft flew 31 manoeuvres – or parabolas - that generate microgravity conditions, giving students invaluable experience in how to design, construct and run experiments in a near weightless environment.

Three student teams participated along with nine professional teams in the 57th ESA parabolic flight campaign. All investigated phenomena that are virtually impossible to study on the ground under the normal pull of gravity.

The campaign began on 15 October and for the first five days the student teams readied their experiments for flight. This included loading the equipment into the body of the specially modified A-300 Airbus, and checking that everything was working.

The experiments were bolted to rails that usually hold the seats in a passenger jet, and straps were installed as holding support for the experimenters. As the personnel on the aircraft all float during the microgravity phases of the flights, metal surfaces had to be covered in foam to stop people bumping into them and hurting themselves.

After a first safety review on 19 October, which required minor modifications of the experimental set-ups, the three experiments were approved for flight. Final briefings took place on 22 October during which all participants were briefed on a variety of topics, including the theory behind the flight manoeuvres that offer microgravity conditions. Less than twenty-four hours later, a 3-day series of flights began.

"Microgravity was not as strange as I expected," says Martin Kaspar from the Hydronauts2Fly team, "In the first 11 parabolas I was the test subject, and blindfolded. It felt very similar to being underwater."

The LINVforROS Corn experiment from University of Florence studied variations in reactive molecules containing oxygen produced by maize plants as they were subjected to the different g-forces in the flight. Such reactive oxygen species (ROS) have recently been identified as signalling molecules in plants, and these experiments studied how the plants responded to the stress of being weightless. "Our first impression of the experiment is good. We performed a preliminary analysis of our data: we have a good number of signals," says LINVforROS team member Diego Comparini.

The Dustbrothers experiment from Universität Duisburg-Essen, Germany, investigated the levitation of highly porous sintered glass plates due to the Knudsen Compressor effect. This poorly understood effect is thought to be important in the early phases of planet formation, where it is possible that it is at least partially responsible for the movement of dust away from the star in a protoplanetary disc of matter.

"The experiment worked just as we expected. Future data analysis will show the quality of the recorded data, but we are confident it will be quite good," says Christophe Dürmann, one of the Dustbrothers team.

ESA's Education Office has been running "Fly Your Thesis!" since 2009, but first sponsored student experiments on parabolic flights in 1994, in collaboration with the Technical University of Delft, The Netherlands. These current parabolic flights take place on the Airbus A300 Zero-G operated and maintained by Novespace from Bordeaux, France. The student parabolic flight campaign that just concluded is, for the time being, the last of the programme.

All three teams must now analyse their data and the results will form part of their Masters theses, PhD theses or research programmes.

"My thanks to ESA Education and the Novespace team for this great opportunity," says Emanuela Monetti, from the LINVforROS team, "This experience was for me one of the best in my life."