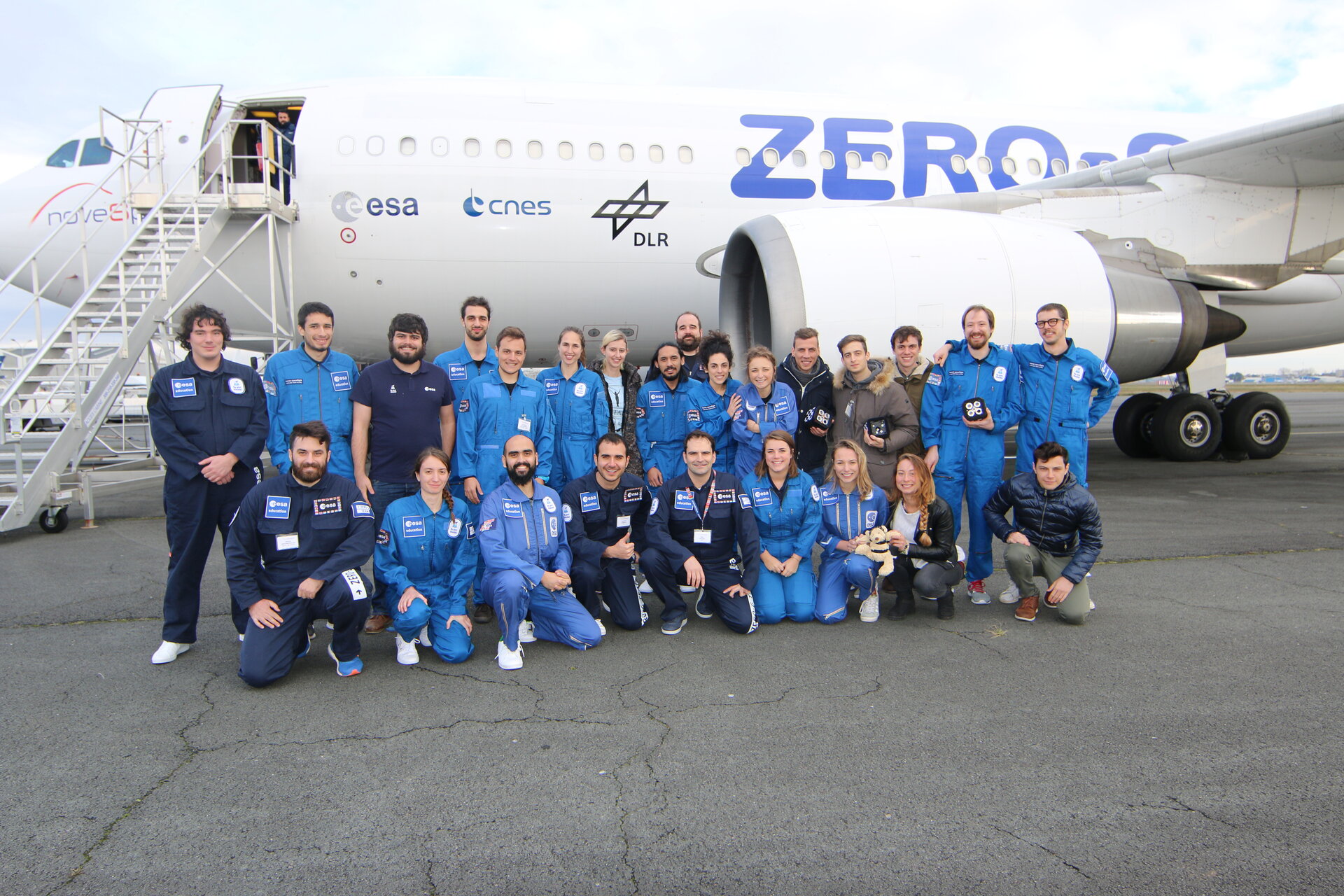 After two intense weeks, the Fly Your Thesis! 2017 campaign has come to an end. Six student teams coming from all over Europe performed - after more than a year of development – their experiments in microgravity conditions.

The students experienced 93 parabolas in total, equivalent to about half an hour of microgravity.  During the first week, the students set up their experiment aboard the NOVESPACE’s Airbus A310 ZERO-G and, assisted by NOVESPACE and ESA Education, were able to successfully integrate their hardware on the plane and get ready to fly. Nothing was left to chance. Every protocol, every procedure was studied up to the smallest detail. The students were finally ready to live the dream of seeing their creation (and themselves!) floating around in microgravity. This year, the experiments were very diverse ranging from material science to psychology, all trying to dissect the role of gravity in their respective fields of research.

During the development of the experiments, all teams were closely supervised by ESA Education, Novespace and by an assigned mentor from the European Low Gravity Research Association (ELGRA).

Parabolic flights on board the Novespace Airbus A310 Zero-G

To offer microgravity conditions on board the Airbus Zero-G, the pilots have to carefully let the plane go into free fall. This manoeuvre starts in a steady flight at about 6 km altitude.  The pilots then increase the thrust and gradually “pull up” the nose of the aircraft to a pitch angle of about 50°. This manoeuver lasts about 20 seconds and causes the local acceleration to increase up to 1.8g (1.8 times the gravity level at the Earth’s surface). Once the maximum pitch angle is reached (altitude around 7.5 km) the engine power is reduced to only compensate for air drag and the aircraft falls freely following a natural parabolic path with the highest altitude point at around 8.5 km. During this free fall state, which lasts about 22 seconds, experiments and experimenters on board the aircraft experience microgravity just like astronauts on board the International Space Station. The manoeuvre is concluded with another 1.8g “pull out” phase eventually bringing the aircraft back to a steady horizontal flight. This is repeated 31 times per flight and the campaign consists of three flights.

To fly this special manoeuvre, 4 pilots are controlling the aircraft at the same time. The plane, with only 40 seats and an overall length of 46.4 meters, has nearly half of its total length (20 meters) dedicated to accommodate the experiments to be executed in microgravity conditions. The floor and all walls are specially padded to hurting experimenters during the various phases of the parabolas.

The Fly Your Thesis! programme

After selection in October 2016, the students’ teams worked hard and had to pass specific reviews and milestones. Designing experiments for microgravity and to be operated on board the Zero-G aircraft is very different than just building to operate them in a lab. It is indeed very challenging to meet all safety requirements linked to the special on-board conditions and the limited time available.  All students’ experiments of FYT! 2017 were very successful throughout the campaign and the scientific data which was collected will keep the students busy for quite some time as they carefully evaluate of the results.  The results will then be disseminated in papers and at international conferences as in previous years. 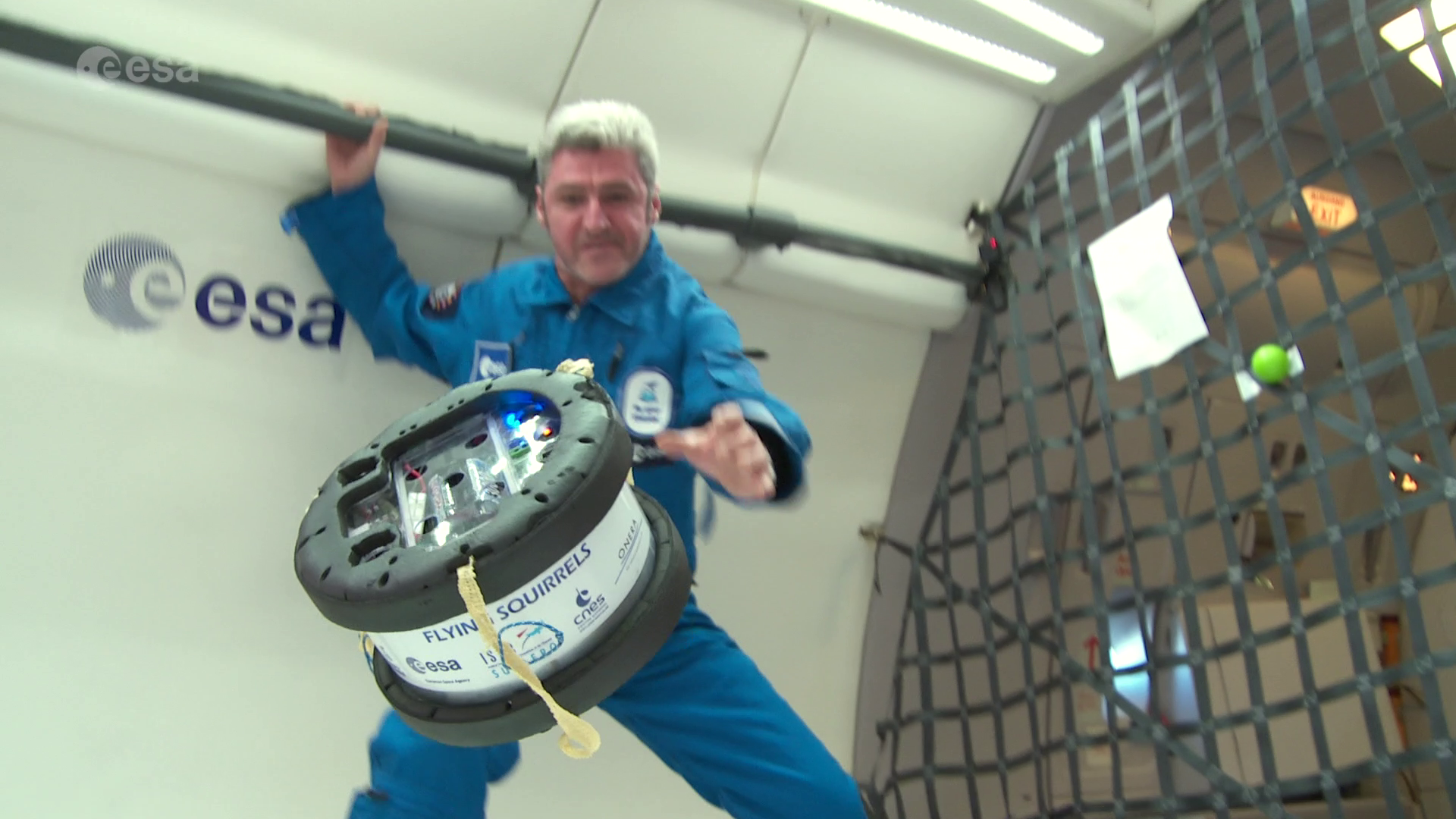 This experiment aimed to carry out the test of a new promising technological system for attitude control of cubesats. This system was composed of a cluster of six mechanical actuators (Single-Gimbal Control Moment Gyros) and a new steering law for these actuators. Control Moment Gyros, already used in some satellites or space stations, have proven to be very power-efficient and have more torque capabilities than other actuators for the same mass. For micro-satellites or cubesats, their use is not common because of their mechanical complexity, the difficulty of steering them, and few systems are commonly available in the market. 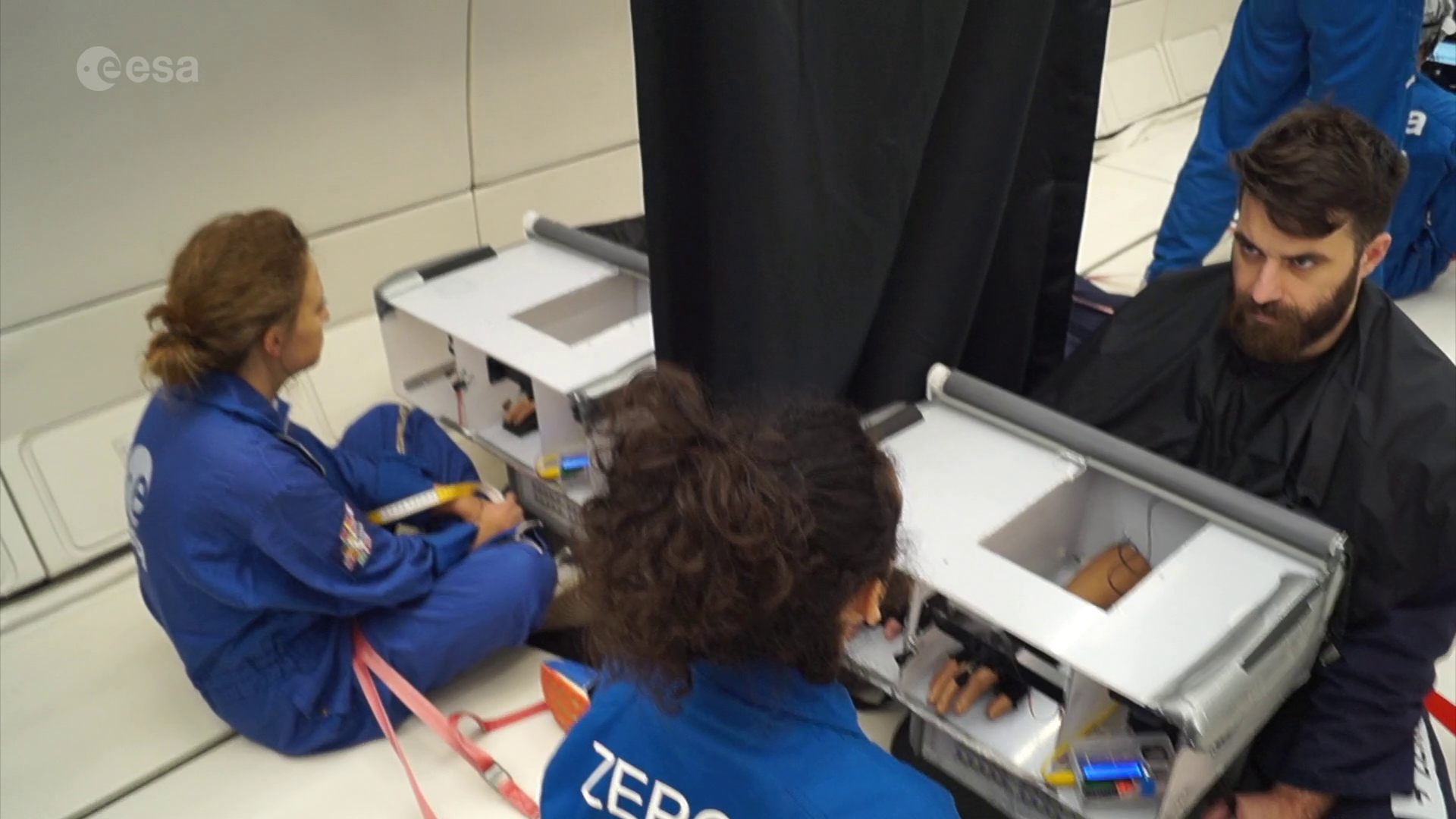 Modulation of spatial and body representation by altered gravitational input

This experiment aimed to assess whether and how the alteration of the gravitational input modifies subjects' body awareness as shown by its effect on a well-known perceptual illusion of body ownership (the rubber hand illusion). The team expected that, when the strength of the gravitational input is reduced or augmented–such as in the 0g/-g and 2g conditions, respectively - both body and spatial awareness would result reduced or augmented, correspondingly. 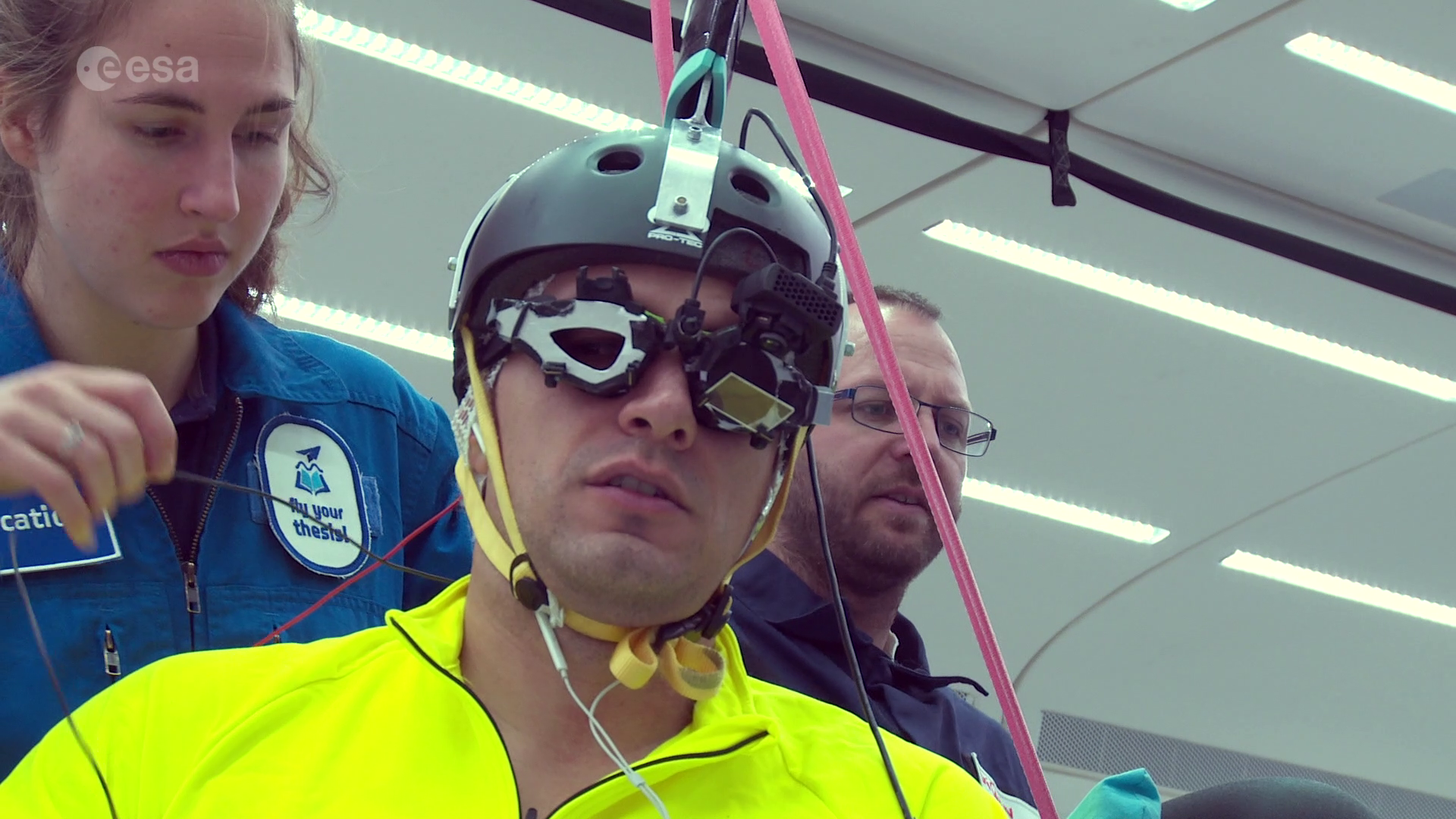 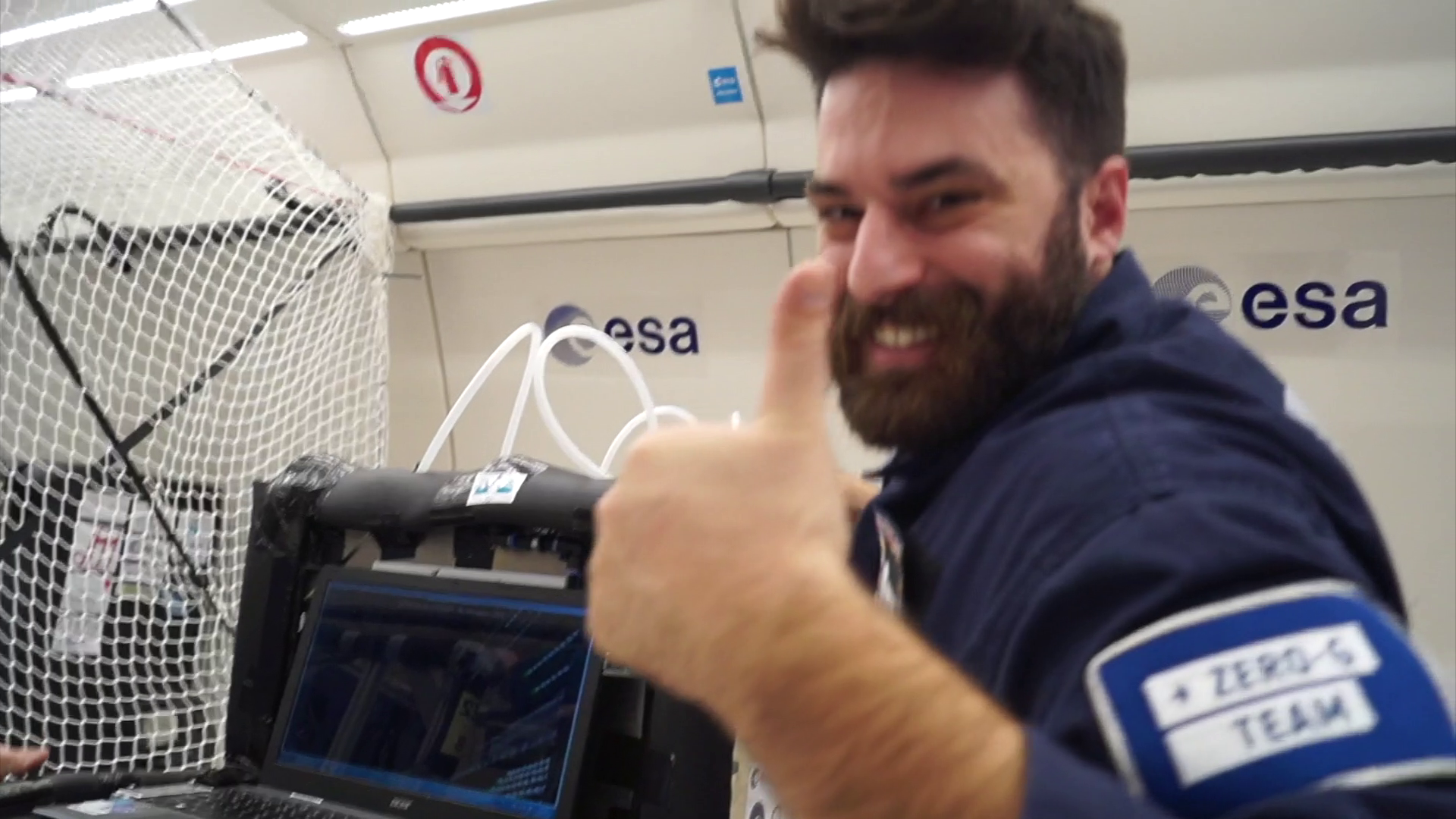 BePoM - Behavior of Polymers in Microgravity

The main aim of this experiment dealt with the idea of deploying pre-impregnated with polymer fiber fabrics into space and polymerizing them, thus creating a lightweight, high-stiffness, thin-shelled structure in space. This was achieved by two basic experiments. In the first experiment, uncured carbon fiber reinforced polymer tubes were stowed before flight and then deployed and cured during the micro-gravity duration of the parabolic flights, using UV light. In the second experiment, small uncured polymeric samples were also cured during the micro-gravity intervals of the parabolic flights. 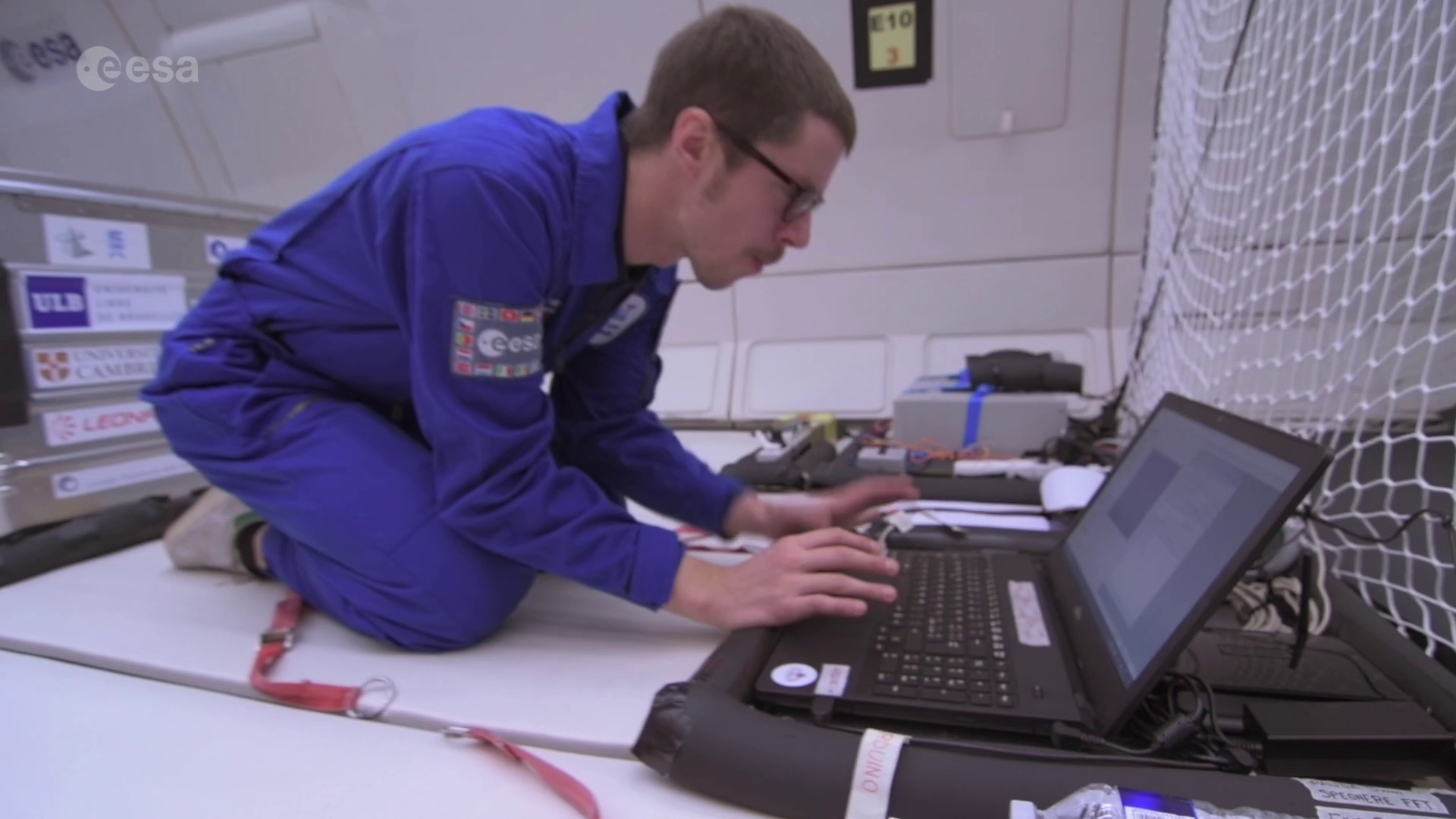 PACMAN experiment was a technology demonstrator whose main goal was to develop and validate, in microgravity conditions, an integrated system for proximity navigation and soft docking based on magnetic interactions. This was accomplished by launching a miniature spacecraft mock-up towards a fixed target that generates a static magnetic field; a set of actively-controlled magnetic coils on-board the spacecraft mock-up, assisted by dedicated localization sensors, was used to control its attitude and position relative to the target. 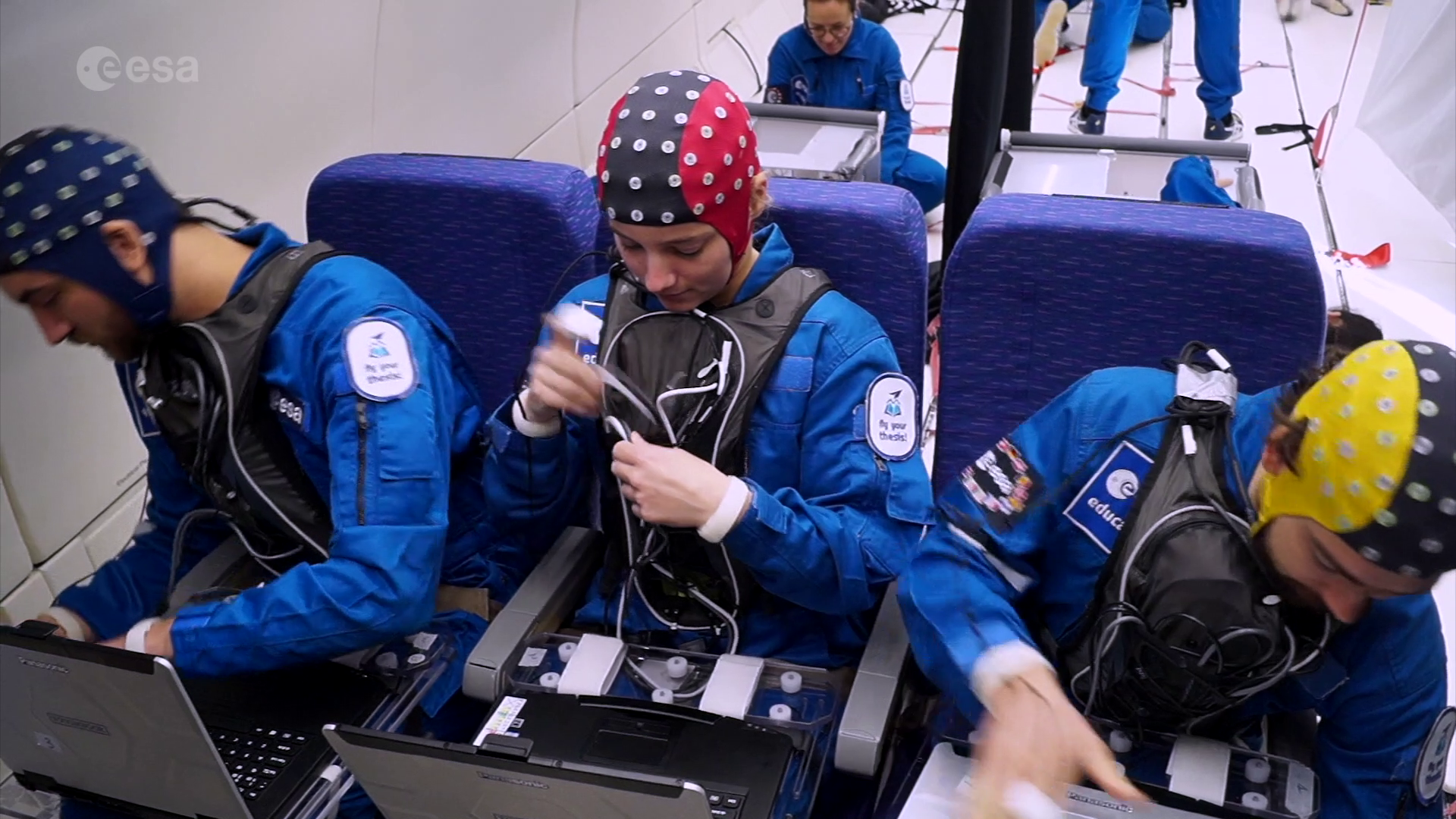 The main research areas of the BrainFly team focused to further investigate the effect of microgravity and hypergravity (1.8g) on the basic function of the brain and to explore the ability to self-regulate sensorimotoric rhythms in order to operate a brain-computer interface (BCIs) during microgravity and hypergravity. The six test subject had to play the famous‘’Space Invaders’’ game, with a small difference: the cannon was not operated through a joystick but through the subjects’ brain!

Fly Your Thesis! – a programme worth joining

Part of the ESA Academy’s Hands-On Space projects, Fly Your Thesis! is a recurring programme that ESA Education sponsors on a yearly basis. During the FYT! programme, students receive valuable feedback from ESA, Novespace, and European Low Gravity Research Association (ELGRA) experts; last but least, they get the extraordinary opportunity to execute their experiments in microgravity conditions on-board a state-of-the-art vehicle like the Novespace Zero-G aircraft, beside experiments and teams of professional researchers. The programme enables participants to develop important practical skills through hands-on activities, as well as project management, thus developing a considerable direct experience in designing, testing, and operating in laboratory and microgravity conditions their experiment hardware and software.

As a direct consequence of the research they conducted during past FYT! campaigns, many students have so far been able to present their results at international conferences and/or to publish papers in leading scientific journals. FYT! also provides opportunities to meet experts and work with them. The experience gained is an important addition to students’ curriculum vitae, and increases their chance of being elected for future professional opportunities.

“The Fly your Thesis! programme is a very interesting opportunity for students to be trained to the various needs required for a real space project. Beyond the proof of concept which is commonly the main content of a PhD in a scientific lab, FYT programme allows the selected team to increase the TRL (Technological Readiness Level) of their project and to handle the various aspects which are not commonly addressed in a classical PhD i.e. team building, safety requirements: the various discussions and exchanges with ESA Education Office and Novespace teams is a benefit experience for students on "What is the real world”,  deadline constraints and more. I would like to thank ESA Education Office for such a wonderful programme and I would like to encourage ESA to maintain such a programme. Indeed I am completely persuaded  that it is a long term very good investment for ESA: the PhD students, trained though FYT programme, will be particularly pertinent to manage future European space projects."
Daniel Alazard, System Dynamics and Control Professor at ISAE-SUPAERO, FR