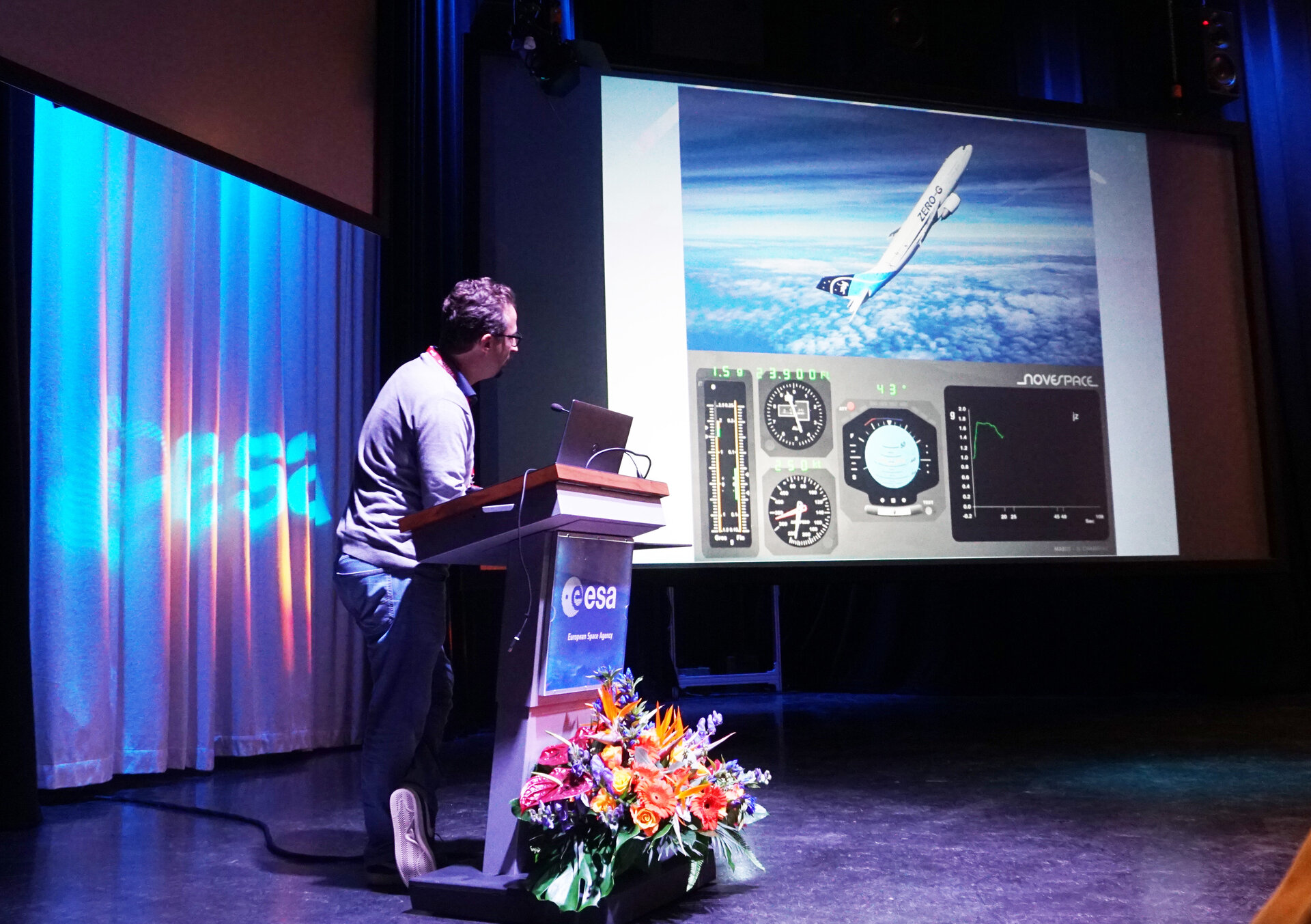 Last week, ESA’s Education Office invited six student teams to ESA ESTEC in Noordwijk to present their experiment ideas to the Fly Your Thesis! 2019 Selection Board. The six student teams were from Poland (CANCER), Germany (Grain Power 3D-Printing and TARDIS), the United Kingdom (PHP3) and Italy (BAMBI), respectively. Eventually, two teams were selected to participate in the parabolic flight programme of the Fly Your Thesis! 2019 campaign.

ESA Education released a call announcing the opportunity for master and PhD students to propose an experiment to be conducted in the microgravity facility of Novespace’s A310, which provides three flights with 31 parabolas per flight. With each parabola offering around 20 seconds of microgravity, that gives the experiments around 10 minutes of microgravity per flight. Teams from various ESA Member State universities applied with proposals that focused on research within the scientific fields of biology, technology, aerospace engineering, medical sciences, neuroscience and so on. From all the teams that applied, ESA Education invited six teams to participate to a two-day selection workshop at ESTEC last week.

During the first day of the workshop, several members of the selection board (ESA Education, ESA Human and Robotic Exploration Directorate, Novespace and the European Low Gravity Research Association) gave presentations, after which the students were taken on a tour to ESA’s Test Centre.

The students had to present their experiment proposals on the second day of the workshop. Each team was given 30 minutes to present their experiment and convince the selection board that their experiment was safe, feasible, scientifically relevant, educational and was in need of Novespace’s microgravity facility. After each presentation, the selection board had the opportunity to ask the students questions for 20 minutes. The session kicked off with Team CANCER, consisting of seven students from the Polish Wroclaw Medical University, the Wroclaw University of Science and Technology and the University of Wroclaw department of Biological Sciences, presenting their proposal to test how variation of gravity levels found aboard parabolic flights might affect malignant cancer cells and specifically if gravity provokes higher sensitivity of malignant cells to chemotherapeutic drugs. After that, four students of Team GRAIN POWER 3D-Printing from the Cologne University of Applied Sciences and the Institute of Materials Physics in Space in Cologne, Germany, proposed to demonstrate the feasibility of powder-based additive manufacturing in microgravity by flying a prototype powder-based 3D-printer working independently of gravity.

A third team called PHP3, compromised of five engineering master students from the University of Brighton, explained that they aim to look a heat management technology and scale it down to explore its feasibility as a nanosatellite-sized solution for future space technologies. Team TARDIS, from the University of Duisburg-Essen and consisting of five persons, proposed to test a phenomenon known as the Ballistic Sorting Effect in an extremely low gravity environment to evaluate whether it is sufficiently strong to explain the size sorting on asteroid Itokawa. The fifth team from the University of Turin and existing out of six students, BAMBI, showcased their idea to explore whether and how, in the human brain, the multisensory integration mechanism that is known to be altered under microgravity conditions is dynamically shaped by vestibular and proprioceptive inputs. Finally, six students from the University of Applied Sciences Munich, team Zero GAME Munich, closed the selection workshop with a proposal that aims to investigate a new 3D printing concept for additive manufacturing of ultra large structures in space.

The selection board based its final decision on feasibility, safety, scientific value and educational value, and chose two teams that will participate in the Fly Your Thesis! 2019 campaign: GRAIN POWER 3D-PRINTING and PHP3. Coming January, both teams will attend a training week in ESA Education’s training facility ESEC-Galaxia in Belgium. Here they will learn more about project management, outreach and communication, system engineering principles, space science and other important topics that will help them in the progress of their experiment project. They will also spend time with Novespace engineers and experts to discuss their experimental design and set-up. After this training week, the teams will work on improving and finalizing their experiment, for which they will receive guidance from ESA Education and Novespace to ensure that they will reach their goals and are able to fly their experiment in Autumn 2019!