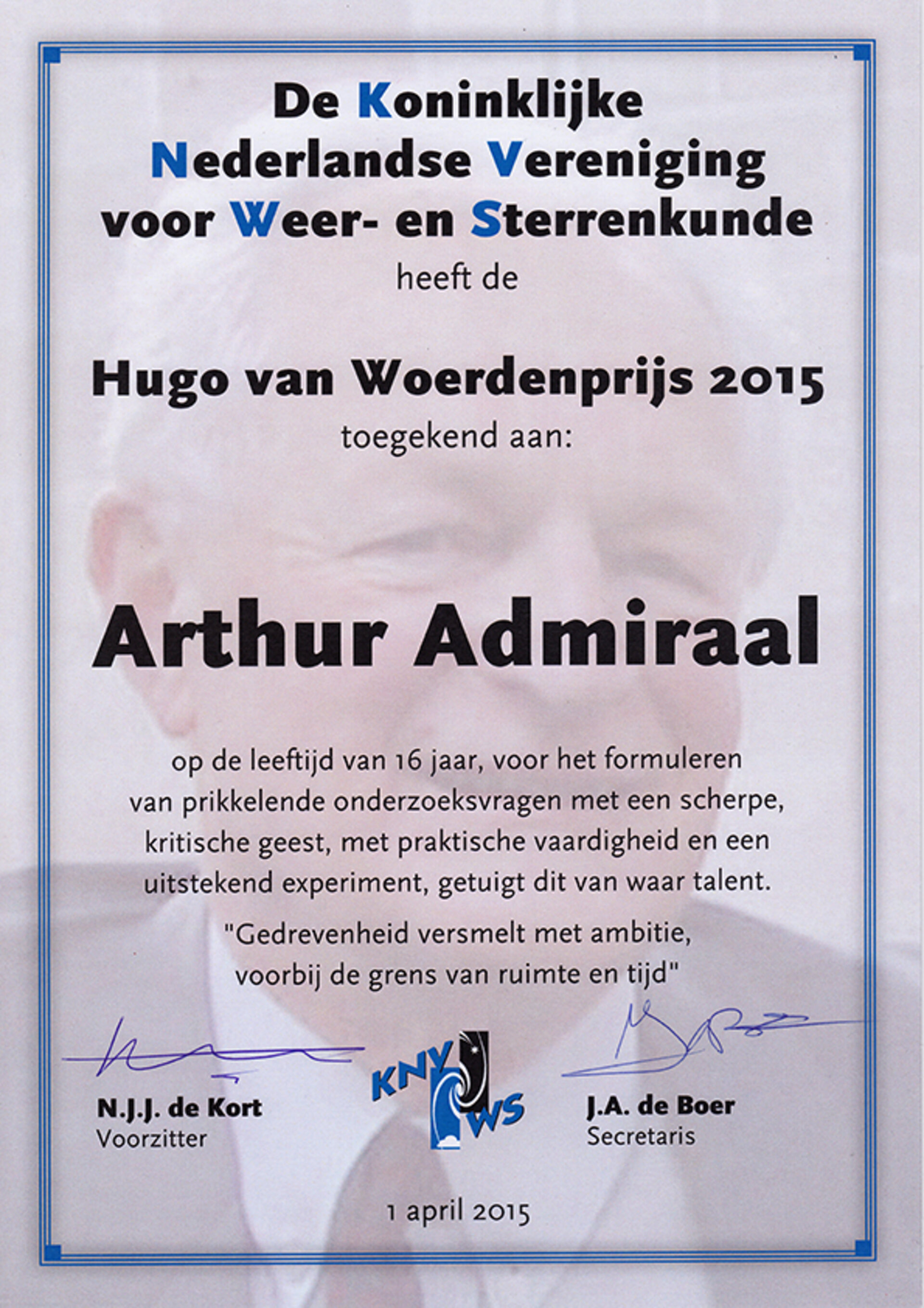 High-school student Arthur Admiraal has been awarded the prestigious Hugo van Woerden Prize by the Royal Netherlands Association for Meteorology and Astronomy (KNVWS). He has been honoured for an experiment he performed in the Large Diameter Centrifuge (LDC) at ESA’s European Space Research and Technology Centre (ESTEC).

The Hugo van Woerden Prize is awarded to young people under twenty-five who are members of the KNVWS and who have shown an unusual commitment to researching either in meteorology or astronomy.

The award bears the name of Prof. Dr Hugo van Woerden who was Chairman of the KNVWS from 1992 to 2002, and who is now Honorary President of the KNVWS and emeritus professor of radio astronomy at the University of Groningen. In addition, Prof. Dr van Woerden has been a tire-less supporter of amateur involvement in astronomical research.

The award, which comes with a prize money of €250, was presented to Arthur Admiraal on 25 April 2015 in Hoogeveen, the Netherlands. He was praised for formulating research questions with a critical mind, developing hands-on experience and his melting ice cube experiment. Taken together this indicates that he is a natural scientific talent.

When Arthur Admiraal was small he automatically used to think big. Once he made a boat out of cardboard but instead of just making a model boat, he made one that he could fit into. Now he believes you can also think big in other ways. "You can think big in the complexity of something. I want to improve stuff by trying out new things,” he says.

His work was part of his school project called ‘A Place in Space’, where high-school students aged 15-16 have to prepare a ‘space mission’ that lasts for 24 hours. As part of this project, Arthur Admiraal and fellow high-school student, Jawad Nikrawesh, took time-lapse photography of ice cubes melting.

It took four months for the pair to build and test their equipment. At the time Arthur Admiraal and Jawad Nikrawesh were 4th grade high-school students from the Northgo College, Noordwijk, The Netherlands.

They used a Raspberry pi computer and a time-lapse camera to capture the melting of the 4x4x4cm3 ice cubes. Beneath the ice cube’s platform they connected 9 temperature sensors and with data in hand, they wrote a computer programme to model the way in which the temperature changed in the ice cube as it melted.

Next they wanted to perform their experiment in a centrifuge to simulate different gravity levels. Their teacher contacted engineers from ESA’s Technical Directorate for advice and with the support of the ESA Education Office they were offered the unique, opportunity to perform their experiment in the LDC, normally only accessible by university students from BSc to PhD level in the Spin Your Thesis! programme and by professionals.

In May 2014, the high-school students and their teacher arrived at ESTEC to perform their experiments. They melted ice cubes made from water and others made from peanut oil under conditions of gravity four times larger than Earth’s normal. The tap water ice cube took around 3 hours to melt and the peanut oil 1.5 hours.

This allowed them to test two hypotheses. First, that the ice cube made out of tap water would melt in increased gravity just like in normal Earth’s gravity. Second, that in increased gravity the shape of a more viscous ice cube would flatten more as it melted away. Their final report was published online and can be downloaded here.

At a time when many of his peers might have preferred to spend the day playing computer games, the work gives Arthur a unique sense of achievement. ”If you've gamed for a day, what have you accomplished? Doing these sorts of projects is also really fun and it gives you the satisfaction of creating something."

Although Jawad Nikrawesh is not a member of the KNVWS, and so is not eligible to share the award, the organisation has made a formal acknowledgement of the excellence of his work.

More information about the ‘Down to Earth’ experiment can be found here.