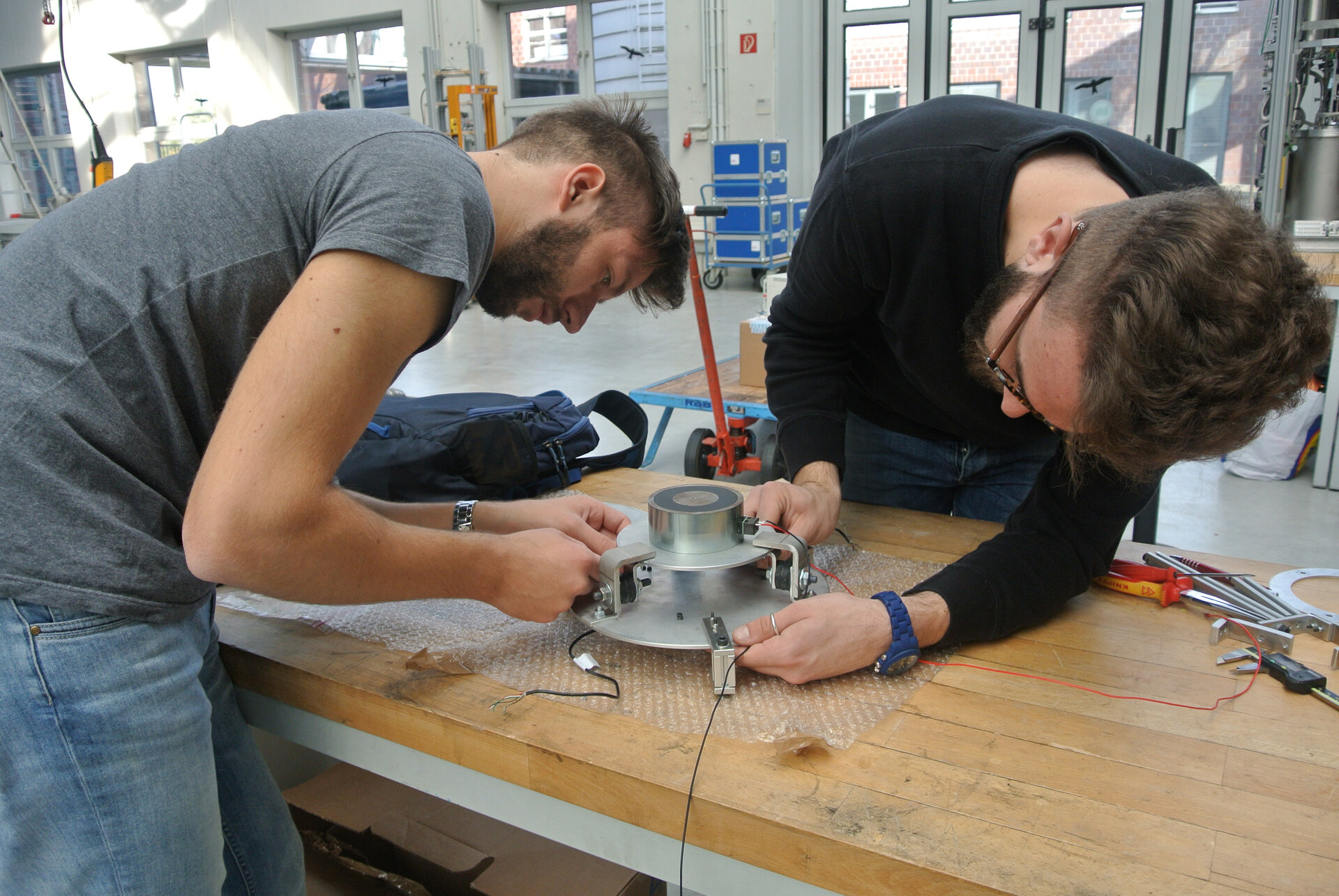 A new docking system for future spacecraft has been tested at the ZARM Drop Tower facility of Bremen University, Germany. Five master students from the University of Padova, Italy, prepared and performed microgravity experiments with the help of ZARM engineers and showed that spacecraft may one day be docked in a new way.

The work was conducted as part of the ESA Education Office’s Drop Your Thesis! 2014 campaign. This is the sixth year that the programme has run and gives a team of undergraduate, graduate and/or PhD students the opportunity to conduct a series of microgravity experiments.

This year’s team is named FELDs for Flexible Electromagnetic Leash Docking system. Across five launches conducted during the second week of their experiment campaign held from 3–14 November 2014. The FELDs experiment is a proof of concept for a new tether-based docking system, to test if docking can be achieved in controlled microgravity conditions.

The final application of this system would be to have one spacecraft shooting a spherical probe towards another, which attracts the probe by generating a magnetic field with a strong electromagnet. Once the probe is attached to the other spacecraft, the flexible wire can be retracted and the spacecraft can be reeled in so that a soft docking can be performed.

This kind of system has significant advantages over traditional docking methods, where spacecraft must align themselves precisely and use significant amounts of fuel as they edge closer and closer. The more flexible FELDs system might be useful for several applications in the space sector, from refueling operations to personnel transfer on the ISS and even to debris capture.

The team used the 146m-high ZARM Drop Tower, one of the most advanced research centres of its kind in Europe, to ‘launch’ their experiment. As it was released from the top of the tower, it experiences 4.7 seconds of microgravity.

The first week of the campaign was spent assembling the experiment, verifying the connections, integrating it inside the drop tower capsule and performing on-ground tests that included firing the docking mechanism. Videos of these tests allowed the team to calibrate their system and adapt it for firing in microgravity.

“In the Integration week you learn so many things thanks to the technicians that follow you every minute to ensure that the experiment is ready for the launches,” said the FELDs team.

During the second week, they performed one launch per day for five days. The first launch was a success. The probe successfully docked with the electromagnet. For the second and third launches, the students reduced the velocity of the probe to better understand how the electromagnet attracts the probe. Again, both launches were successful.

For the fourth launch the team decided to take a risk and tilt their system a few degrees. This time, the probe did not reach its target. For the fifth launch, the students reduced the angle but this launch failed also. This data is invaluable for them to better understand the limits of their current system.

“The week of the launches is very exciting because you can see your experiment in microgravity. When you get positive results, all the months of work carried out become very satisfying,” said the FELDs team.

The team now has four months to analyse their data, draw some conclusions and provide the ESA Education Office with a final report.

The seventh year of the Drop Your Thesis! programme will run in 2015. The call for proposals is open for applications until 7 December 2014.