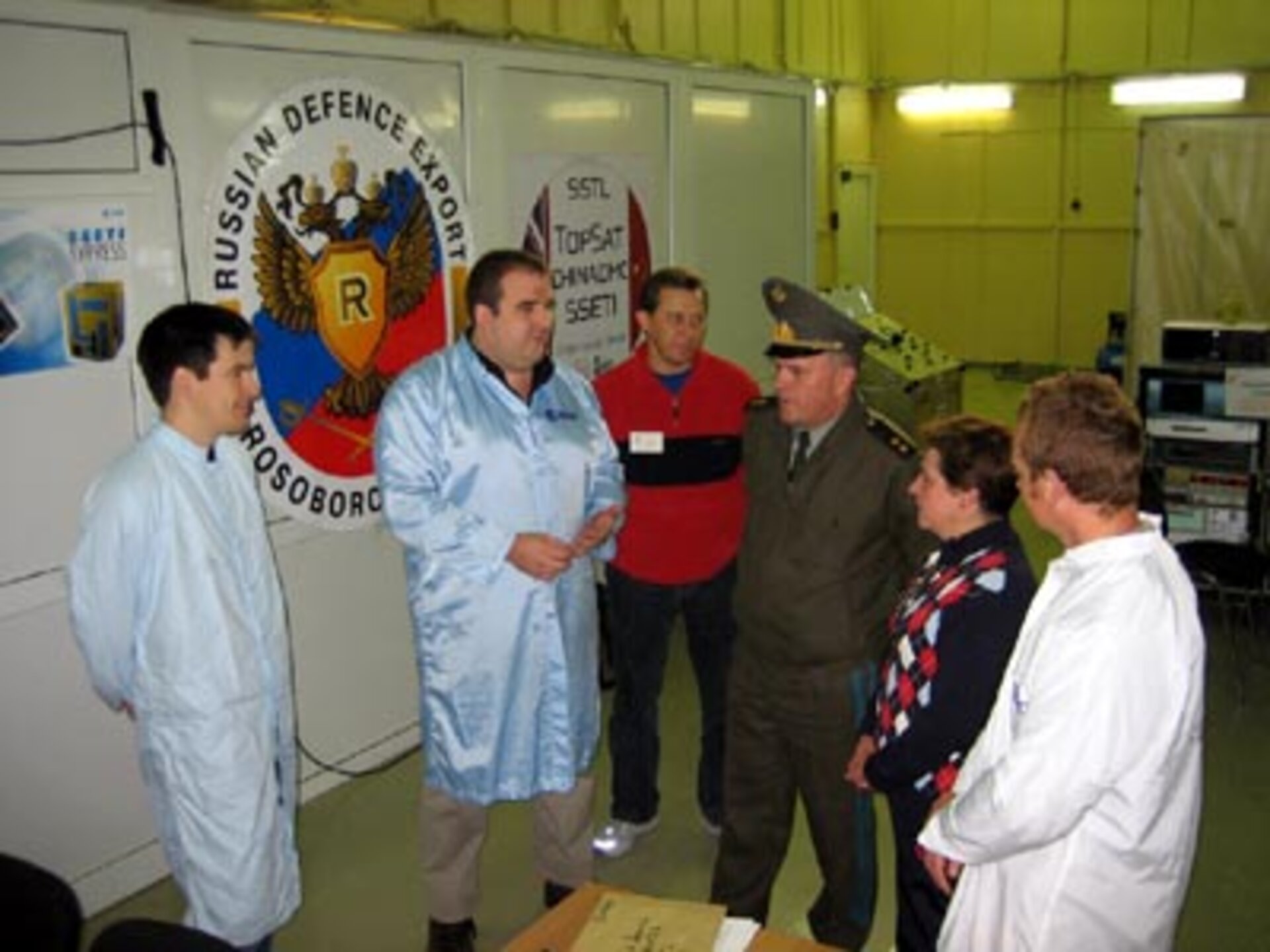 We started the day by reading out the tank pressure to finish our overnight decay test. After checking the results (no leaks) we continued the fuelling process with a new bottle of nitrogen and increased the pressure up to 304 bar. We were then honoured by the visit of the Cosmodrome Commander, Lieutenant General Anatoly Bashlakov, who was very interested in our project and the participating universities.

In parallel to the modified charging of the +y T-Pod, Graham upgraded our test ground stations, giving us UHF uplink and downlink on both ground stations and S-Band downlink on one of them too (5 channels in total). This was very difficult because we didn't have the right cables with us. It gives us the chance to simulate the performance of the satellite and SERACC when subjected to simultaneous telemetry requests from two radio amateurs.

The last activity of the day was setting up the charging of two of the cubesats (UWE-1 and XI-V). We then left the facility to go back to the hotel. After 17 days here in Plesetsk, the spacecraft is in good health, in comparison to some members of the launch campaign team who now have a cold… :-(

After charging the last two T-Pods in the morning, we went through another important step for the launch preparation of SSETI Express: the final fuelling of the Coldgas Propulsion System. We made some modifications on the ground support equipment to increase its reliability (supported by the propulsion experts of SSTL), followed by a last checkout of all necessary equipment. Due to the fact that all operations with the 300 bar gas bottles are considered to be hazardous, we checked it thoroughly.

The actual filling was then done in five steps, to prevent the tank from potential damage due to the high temperatures which usually occur when the pressure increases. In parallel, our computer and communication experts set up a second command station in order to test how the SSETI Express Radio Amateur Communication Client (SERACC) responds when more than one ground station is communicating with the satellite.

We ended the day leaving the spacecraft with a tank pressure of 250 bar to perform a pressure decay test overnight, and one T-Ppod trickle charging.

The task of the day was to charge the batteries in the T-Pods which will eject our CubeSat passengers into space shortly after launcher separation. The charging procedure went on without any problems, glitches or other nerve-wrecking events.

Most of the time, charging requires little human interference, so in the spirit of SSETI and radio amateur co-operation we took advantage of the availability of our spacecraft and spent some time beta testing a piece of software written by a radio amateur. It is a software TNC, which is capable of recording and demodulating radio signals received from the spacecraft even from our high-speed S-Band link. These tests went well and we produced lots of data to be sent to the developer in order for him to improve his programme, which will be very useful to radio amateurs wanting to communicate with SSETI Express.

Since some of the team members working on the other spacecraft were leaving today, we also took this opportunity to take a group photo of the entire DMC#3 launch campaign crew.

16 September: Preparing for the push

Today we performed a very important and critical launch preparation procedure: installation of the flight model of the separation system. This involved disintegrating the old ring from the base of the spacecraft, lifting the spacecraft on a crane, and installing the new ring instead. The pyrotechnic devices in this new system will be detonated once the spacecraft is in orbit, breaking the ring into two, and then the springs will push SSETI Express away from the upper stage of the rocket.

In spite of the continued confusion regarding the final launch date the SSETI Express team is planning to continue with the campaign as scheduled. Better to be ready early than late!

In the preparation facility the communications link was transferred over the real-life UHF and S-Band radio communication channels from the mobile groundstation to the spacecraft into the cleantent. Everything went very well.

In the afternoon we got a tour of the Cosmodrome museum and were allowed to write down a short message and our names in the Cosmodrome logbook. It was a surprise for us to find out that the first SSETI spacecraft is being prepared for its launch in the first building ever built of the Plesetsk Cosmodrome! The building was commissioned in 1959 and is still active - we see this as a good omen for SSETI Express.

Every day is a working day in the spacecraft business and this Sunday was allocated to some more integrated system testing. The joy of the day was testing the on-board camera. This procedure required all of our combined expertise in the field of optical systems in order to position and orient a mirror above the camera lens which would enable us to photograph Graham standing in the assembly facility. After numerous attempts we finally obtained a beautiful picture down the radio-link.

Having completed all of the spacecraft checkout a little early we had some time today to work on all of the small tasks that had been filling up our 'to-do' lists. Some last minute touch-up work on the exterior harness was done, the solar cells were cleaned and some nice developments were implemented on the ground software.

The highlight of the day was seeing the rocket for the first time! We were all very excited, and it suddenly made the launch feel very close. Only 12 days to go...

13 September : Building up the pressure

Today, after the functional checkout tests of the S-Band unit and some minor modifications on SERACC, we ramped down the battery voltage until SSETI Express went into Safe Mode. We then charged the battery with the help of a Solar Panel Simulator until the spacecraft automatically entered nominal mode again.

After lunch we started the second part of the checkout of the Propulsion System with the pressurisation of the mid- and low-pressure area up to 70bar. All typical manoeuvres (e.g. rotations) were performed. All valves and transducers worked fine.

With these last steps, we finally finished the Integrated System Test, which is a major milestone in the SSETI Express Launch Campaign.

We are all very happy!

Today we tested the S-Band transmitter system. Everything went well and the DTMF telemetry, which is already available on the Express Mission website, showed the power output and PA temperature. The RSSI number showed the very high background noise level that exists in the assembly room on the 437.250 MHz frequency - luckily it did not create any difficulties with our testing.

During the afternoon we were invited into the next "room" where the Cosmos launch adapter had arrived. We were able to inspect the separation systems that will deploy each satellite at the correct time and at the precise angle required.

Finally we joined in the usual Monday Express IRC chat and I was also happy to see that the final cricket match between England and Australia would result in a draw, meaning that England has regained the "Ashes"! This is not really as important as a successful launch of Express, but almost!

Every day is a working day in the spacecraft business and this Sunday was allocated to some more integrated system testing. The joy of the day was testing the on-board camera. This procedure required all of our combined expertise in the field of optical systems in order to position and orient a mirror above the camera lens which would enable us to photograph Graham standing in the assembly facility. After numerous attempts we finally obtained a beautiful picture down the radio-link.

Not only did the successful photo session raise the team's spirits, it also allowed us to fix a communications problem which was discovered when using S-Band to download pictures from the spacecraft. The problem was in the ground segment and it was successfully resolved, leaving us with a perfect downlink via the AMSAT-UK radio. Happy integrators!