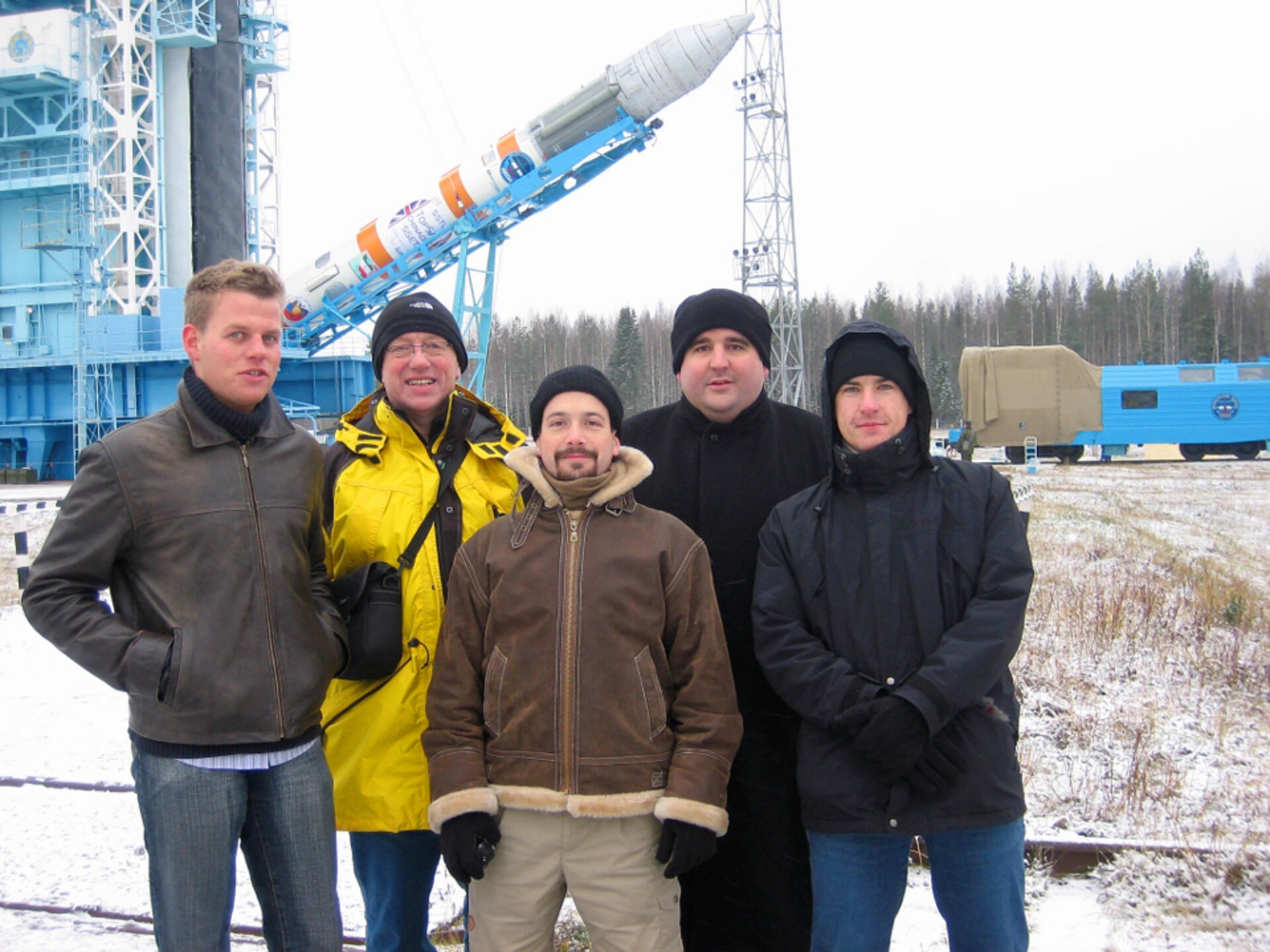 Wednesday 26 October: She's Got A Ticket To Ride...

We then kept ourselves entertained until 02:30 this morning so that we could go back to the assembly facility and watch the rollout of the rocket from the facility. We were even lucky enough that on the drive back to the hotel afterwards we had to stop at a level crossing while the train carrying the rocket rolled majestically past in front of us.

After grabbing a few hours sleep we were taken out to the launch complex, braving the bitter cold, to witness the erection of the rocket on the launch pad. A fantastic experience! It is now standing safely in its tower and they will begin fuelling shortly.

There is nothing more we can do for her - our baby will soon fly the nest. We are all very excited about the launch tomorrow and the start of operations.

The milestones just seem to be wooshing past us as we complete such glorious tasks as Final Checkout, Launch Adaptor Integration, Remove Before Flight and, this afternoon: Fairing Closure.

Like most other events in this place, the closure of the fairing was a somewhat surreal experience to some of us; just standing there in front of two rather intimidating rockets while a day-glow nose cone slowly slides over the five spacecraft sticking out the tip of the Russian booster. Priceless stuff!

The manoeuvre goes surprisingly painlessly, and in a matter of minutes our yellow stripey friend disappears from view, and it will never see the world again from inside the atmosphere. The launch is still on schedule, so coming up next: the roll-out.

Monday 24 October: Break on through (to the other side)

Preparations for today started the night before, when we reviewed the RBF/ABF Item Procedure for the very last time (Remark: RBF=Remove before Flight, ABF=Apply Before Flight). After close investigation several minor changes in the action sequence was agreed upon and more detail about the required tools and intermediate actions was added.

Well prepared we started the working day "just another day in the office..." by the selection of the required tools and equipment. After a short review of the plan with the SSTL representative we got a 'go' and started the final procedure to make the S/C ready for launch and armed for operation.

After performance of the first phase of the procedure inside the cleantent, the S/C was lifted over to the launcher adapter and mounted there. The electrical integration of the separation system was completed, which paved the way for the second phase - the arming of the spacecraft subsystems. Accompanied by safety status checks the EPS (Electrical Power Sub-System), the T-Pods and the Propulsion Pyro were armed and the FPP (Flight Preparation Panel) was finally closed.

Afterwards, the lengthy and demanding process of tilting the launch adapter into horizontal attitude, and its transportation and mating to the Cosmos rocket, was performed by the Cosmodrome engineers. Now the SSETI Express spacecraft and its three pico-satellites are mounted on the launcher adapter, almost ready for launch. The only parts remaining for removal are the -y side protector panel, the camera lens cap and the -y sun-sensor cover.

It's 700km to orbit, we've got fully charged batteries, armed sub-systems, there are two days left and we're getting nervous...hit it!

Today was our last day working with our spacecraft on its own, as tomorrow it will be integrated to the launch adapterFirst we had to retrieve appropriate data from the spacecraft with which to make the final tests of the TDIB, then we shut the On-Board Computer down and turned the spacecraft off for the last time. The main activity that remained to be done was the trickle-charging of the flight battery, which took around five hours. We also fixed the thermal foils and checked the integrity of the pyrotechnic charges that will separate SSETI Express from the launcher.

It was very interesting to watch the other passengers being integrated to the adapter today - all four of them have been installed, leaving just one space for us...

22 October: Are we nearly there yet?

Well the answer is, it seems, - almost! As Karl predicted yesterday, we completed the battery charging of the final T-Pod and spent some time working with the TDBI team in France finalising the telemetry submission website. It is amazing to those of us of a certain age to remember what communications was like before the internet (the younger members of the team just can't imagine it!). It would have been impossible to have created this sophisticated space vehicle without using the 'net to the full in the short time that was available to the SSETI Express teams across Europe.

I think today will prove to be the last "quiet" day that we have in this launch campaign - tomorrow the process of integrating all the satellites with the launch adaptor commences and then the adrenaline will really start to flow.

21 October: Cubic spacecraft and their deployers

Today was not seriously challenging. For the first couple of hours, a lot of battery charging went on. In fact, they will still be charging tomorrow. These are the T-POD batteries being topped up to make sure they can deliver the energy needed to burn the strings that release the cubesats, which is absolutely critical for the three pico-satellite collaborators. Also, the cubesats themselves were checked to make sure they hadn't lost too must of their charge, and it was confirmed that they were copasetic.

At some point during the day Karl got some time off from software development and took the opportunity to pull the RBF plug from NCUBE-2, which means it is now armed and ready for flight. As are all the rest of our little cubic passengers.

The launch campaign team came back to the Plesetsk Cosmodrome today after a two-day journey from everyone's respective homes. We re-installed the spacecraft on its table and set up the groundstation and cleantent around it. Although we were short of time we managed to perform a complete Integrated System Check and were very pleased to find that the spacecraft is in excellent health and is still fully fuelled!

We have changed hotel and are now staying in the Rockot instead of the Zaria - this has a slightly more "western" feel to it.

There are only seven more days to go until the launch, and all preparations seem to be progressing very well for each of the five microsatellites.