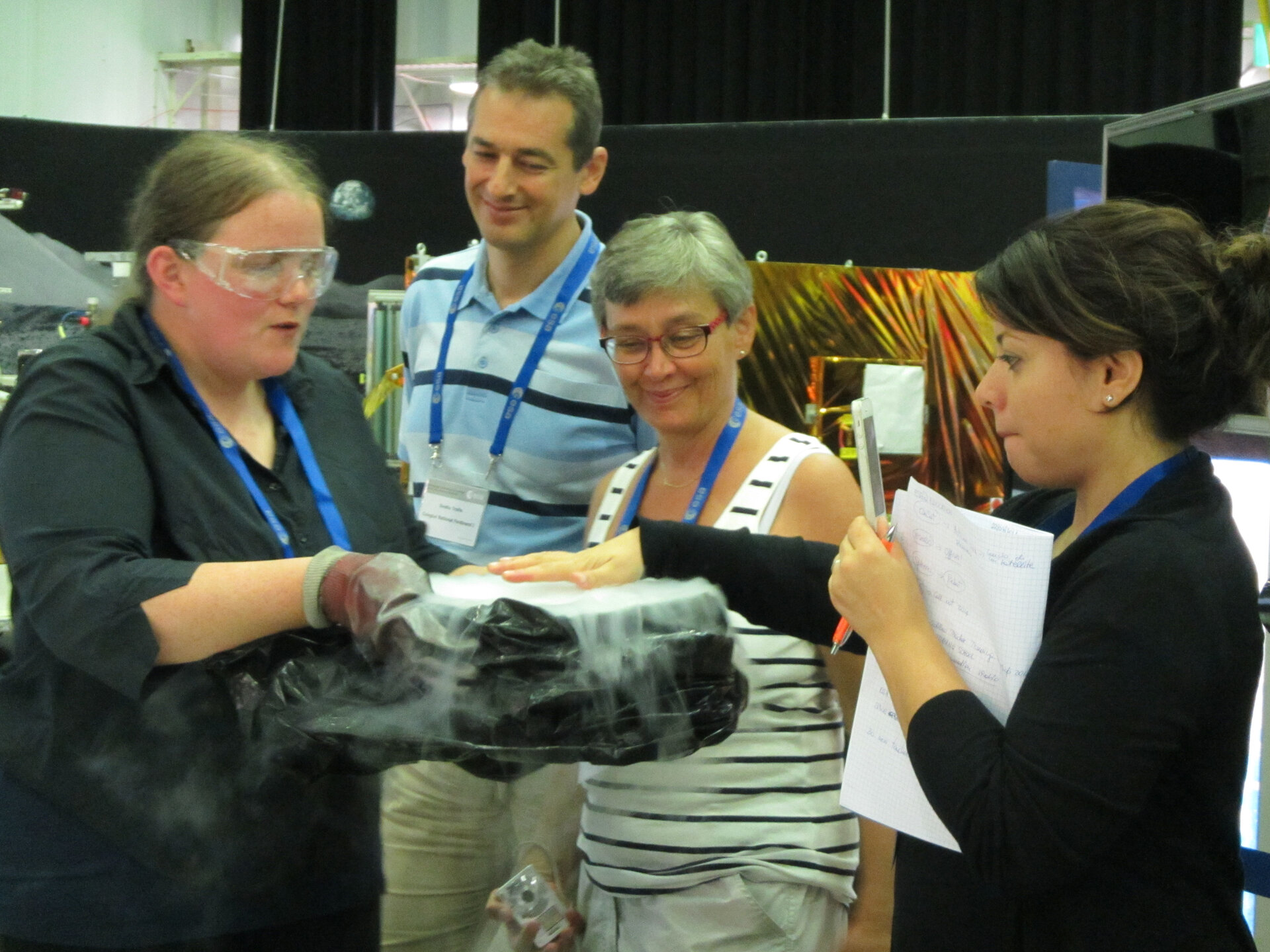 The annual ESA Summer Workshop for teachers hosted at ESA’s European Space Research and Technology Centre (ESTEC) in Noordwijk, the Netherlands, took place last week. From 21 to 25 July, 40 teachers from 17 ESA Member States were shown various methods and resources that will allow them to bring space into their classroom.

Experts from ESA and other educational institutions across Europe, as well as European teachers who already successfully tested the use of space when teaching STEM-related subjects, provided inspirational presentations and practical workshops. New resources developed by the ESA Education Office and its national partners were also introduced for peer review by the teachers.

Based on the feedback received by the participants, the workshop was a tremendous success. “I have a lot of experience using space topics when teaching. This week, however, has far exceeded my expectations, as it has given me some fantastic  ideas. Thank you so much,” said UK teacher Jeremy Turner.

Experiments using comets and the Rosetta mission were demonstrated to illustrate fundamental concepts in physics and chemistry.  Chemistry and biology applications, as well as their links to the curriculum, were discussed thoroughly with the teachers.

One of the  highlights of the workshop involved making  a comet with Sophie Allan, Lead Physics Teacher at the National Space Academy (National Space Centre) in  Leicester, UK, using water, carbon dioxide, and ammonia.

Paul Roche, Director of the Faulkes Telescope project and Professor at the Faculty of Computing, Engineering and Science at the University of South Wales, UK, discussed how teachers could apply for observation time on 1-metre and 2-metre class telescopes around the world, as well as how to plan their observations and process the data.

He also described an effective way to engage teenagers with science.  “Keep it simple. Make it about death, destruction, and dinosaurs.” To do that, he described the ‘Down to Earth’ tool, an educational web-based interactive application that uses the science of asteroids, comets, impacts and meteorites to teach fundamental physics concepts, such as kinetic energy.

“After today’s workshops (‘Down to Earth – from deep space to deep impact’ and ‘Comets – harbingers of doom or agents of life’) comets will never be the same in my classroom! I can just imagine how engaging it will be for my students.  I will start with Sophie’s proposal of ‘making a comet’ and will continue with  the exploration of the impact calculator using the activities proposed by Paul. Thank you all so much!” said Portuguese teacher Eunice Godinho.

Deborah Baines (ISDEFE for ESA), a scientist in the ESA Science Archives Team at the European Space Astronomy Centre in Spain, ran a hands-on session demonstrating how to access solar data from the SOHO mission archive. The data found in the archive give users the opportunity of seeing solar flares, spectacular detonations of magnetic energy on the Sun that can unleash more energy than a billion atomic weapons!

Deborah offered some key dates for the teachers to explore with their students, such as 26 to 30 November 2013, when Comet Ison made its fateful plunge into the Sun. Other days she suggested they look for are those between 28 November and 4 December 2003, when the Sun released a fierce volley of solar flares. These triggered Coronal Mass Ejections, which are vast ‘magnetic cannon balls’ of solar gas. Two of these hit SOHO head-on, and then impacted the Earth behind it triggering a wide-spread aurora and electrical interference.

Other sessions of this workshop included a demonstration of resources related to remote sensing, the International Space Station, and ESA’s Automated Transfer Vehicle. For some of the teachers, it was the exploration of the universe’s mysteries that truly captured them.

“When I realised how little we really know about space, and that our scientists on Earth are making ‘science fiction’ for real, I became even more curious. Now I want to learn more, and I can’t wait to go back home and teach my students. But the most important thing? We humans are fantastic, but when we collaborate and make use of all of our different capabilities, we can do miracles,” said Swedish teacher Jenny Jansson.

The role of the national ESERO offices was highlighted to the teachers. As ESA’s operating hands, they offer resources and advice to teachers who want to use space as an exciting and inspirational context in their daily teaching.

After five stimulating days, the teachers returned home with lots to think about and assimilate. Their task now is to disseminate the knowledge they acquired  to their colleagues, ensuring that the greatest number of  teachers and students  possible can benefit from the efforts of ESA’s Education Office.

French teacher Agathe Pièplu already has plans. She says, “I really enjoyed my experience during this course. It gave me a lot of tools and ideas to develop in my classes, especially in Content and Language Integrated Learning (CLiL) classes. I also hope to find partners with whom I can organise virtual exchanges between our upper secondary schools. Thanks a lot!!!”

But it is Romanian teacher Ovidiu Trofin who sums up the workshop best by saying, “I saw something written on the wall of the Space Expo museum next to ESTEC which I think is so true: Earth needs more Space.”

And ESA, through its several programmes including the Education one,  is here to make sure Earth gets what it needs from space.