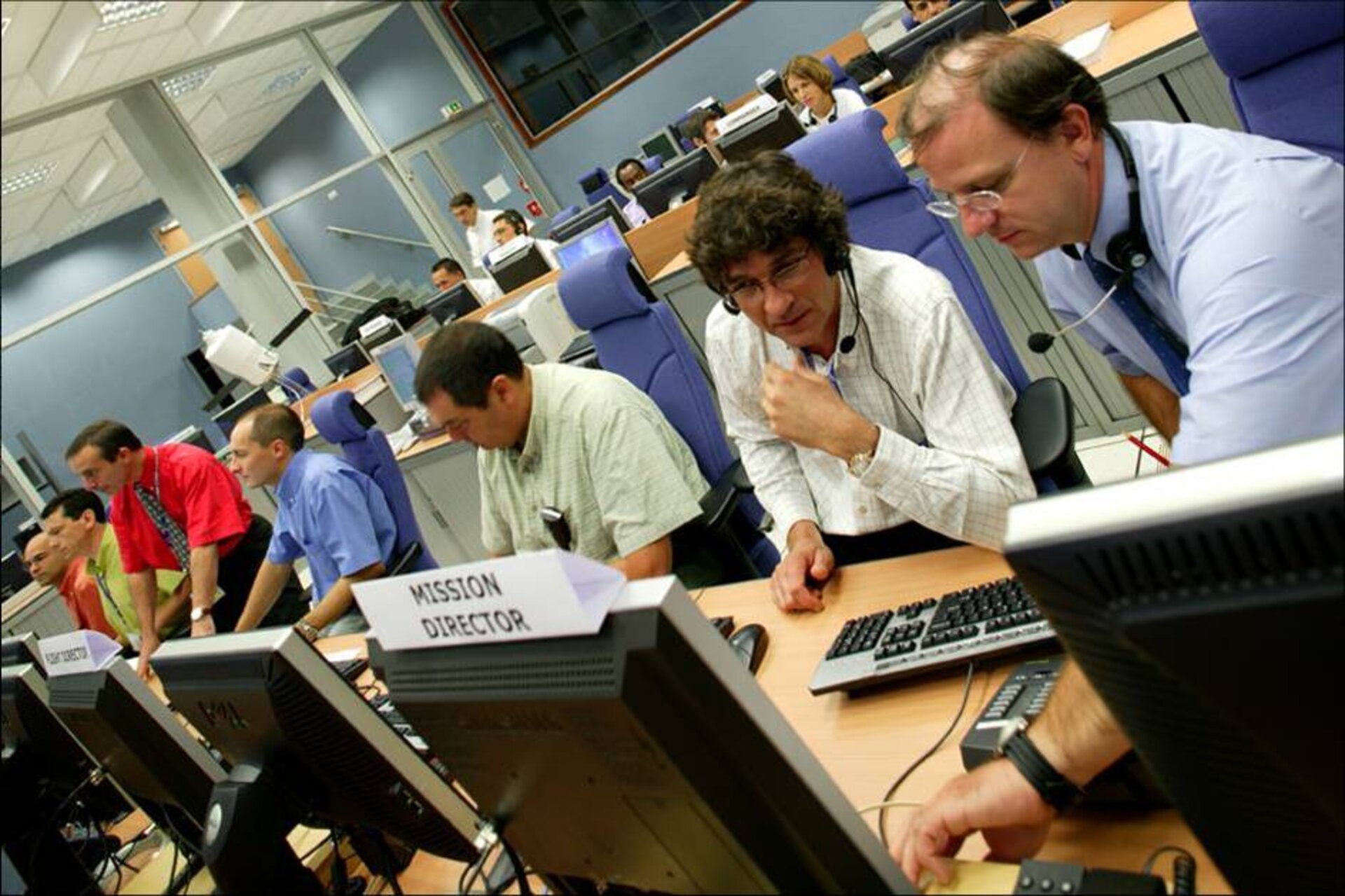 A multinational team of ground controllers are undergoing intense training for the launch of the Automated Transfer Vehicle (ATV), one of the most complex spacecraft ever built and flown by ESA.

It is 05:00 at the ATV Control Centre (ATV-CC) in Toulouse, France, and the simulator operator watches as his computer screen shows the initialisation of a computer simulation of the ATV spacecraft.

Across the globe, in Moscow, Russia (local time 07:00), and Houston, USA (local time 01:00), other operators also prepare their computers, ready for one of several multi-national training sessions preparing for the launch of ATV, ESA's automated transfer vehicle.

ATV will be launched in 2008 on board an Ariane 5 launcher and will be controlled from ESA's ATV Control Centre at CNES (French national space agency) in Toulouse; after several days of flight, it will dock with the Russian Zvezda module of the International Space Station (ISS).

Training, therefore, involves engineers and ground controllers at the ATV, Russian and American control centres, together with ISS crew members and engineers at ESA's Columbus Control Centre, in Germany - who provide the global communications networks for the mission. Jointly, personnel at these locations have been participating in an intense training campaign to prepare them for the launch and operation of ATV.

The training campaign is supported by a real-time simulator, which simulates the ATV spacecraft, the International Space Station, the US Tracking and Data Relay Satellite System (TDRS) space communications network, the ESA space communications satellite Artemis as well as parts of ESA's and Russia's ground station networks.

The simulator comprises three main parts, which run in the three control centres, feed data between each other (and into the ATV ground segment) and ultimately to the various control centres.

The ground control teams must recognise, analyse and diagnose the problems, and then implement the correct response – often under time pressure and sometimes with several problems occurring together.

Each control centre has a dedicated training instructor, who is responsible for directing the simulation and observing the behaviour of the teams.

The whole training simulation is coordinated by the ESA training instructor, who today is observing the simulation from Moscow. Together, the team of trainers devise the scenarios which will be used to prepare the teams.

These are carefully chosen to include a wide variety of problems, which are introduced into the simulator by special commands, causing the apparent failure of various functions or equipment on board the ATV spacecraft or within the communications systems.

The ground control teams must recognise, analyse and diagnose the problems, and then decide upon, coordinate and implement the correct response. This is often done under time pressure, and sometimes with several problems occurring together, forcing them to prioritise and delegate as necessary.

At 06:30 the teams arrive for a pre-simulation briefing. The ESA training instructor ensures that all team members are aware of the details of the simulation, and a check of the intercom loops which connect the four sites is made.

This morning the start of the simulation is delayed because of real-life difficulties with the simulator in Toulouse, and the operator spends anxious minutes tracking down the actual problem. If the simulator cannot start properly, it will be necessary to reconvene the scores of engineers have who gathered across the globe to participate in the simulation at some later date, affecting the overall training schedule. Thankfully, the problem is solved.

Teams unaware of what they will be facing

Finally, at 08:05, the 'GO' button is pressed, and the simulators begin sending data. They have been set up with data corresponding to the position and status of the ATV spacecraft (and the ISS, and TDRS, and Artemis) around seven hours before docking, and today’s simulation covers an approach to the ISS, culminating in an "escape" manoeuvre to prove that the safety-critical docking can be aborted successfully if there are any problems.

As the simulation gets underway, the training instructors privately confer over the impact of the delayed start. The Houston control centre can only participate for eight hours, after which their facilities are required for other simulations (preparing for an up-coming shuttle launch). The training instructors decide to advance one of the planned contingencies to ensure that the necessary training is achieved; the teams in the various control centres, meanwhile, remain unaware of what they will be facing.

Around 15:00 Toulouse time, the planned escape manoeuvre is commanded, and ATV manoeuvres harmlessly away from the ISS.

The simulation progresses nominally for around three hours. Then, as ATV starts a series of homing boosts, there is a problem reported with data coming from the communications centre, in Oberpfaffenhofen, Germany. Unknown to the trainees, a failure in the communications link between Oberpfaffenhofen and Toulouse has been introduced. There is a flurry of calls on the intercom system, and the problem is rapidly and successfully dealt with by the ground controllers.

ATV-CC sends the GO command and ATV approaches the ISS. Suddenly an urgent voice can be heard on the intercom: "This is an emergency." The control centre in Toulouse reports to the Flight Directors in Houston and Moscow that they have lost all communication with the spacecraft.

Eventually the failure is traced to a problem with NASA’s space-based communications system TDRS – which has been deliberately injected by the training instructor.

The training instructor judges how long to leave the teams in this critical situation, and then "fixes" the problem. But now the team in Toulouse have more work to do – they have to command ATV to pull away from the ISS and repeat the approach manoeuvre.

Finally, around 15:00 Toulouse time, the planned escape manoeuvre is commanded, and ATV manoeuvres harmlessly away from the ISS. In reality, this would be followed two days later by the docking itself - but today the team stands down, and gathers to review the day’s activities.

The Flight Directors and Training Instructors from each control centre have a four-way discussion over the intercom system (translated into Russian, as are all meetings involving the Russian partners). They identify the key successes and failures of the day, and the main items which need to be improved or changed.

Despite the morning's delayed start, and a long, hard day, the team are clearly pleased with their achievements. They mill around in the main control room, congratulating themselves on having dealt successfully with the problems thrown at them. They have demonstrated their expertise in controlling the most complex spacecraft ESA has ever built, and as their confidence grows, they move one step closer to be ready for the ATV mission.

This article relates to a recent live training session held at ATV-CC and is based on a discussion with Adam Williams, a Training and Simulation Manager at ESA's European Space Operations Centre (ESOC) and now working at ATV-CC. The first ATV, Jules Verne, is scheduled for launch early in 2008.