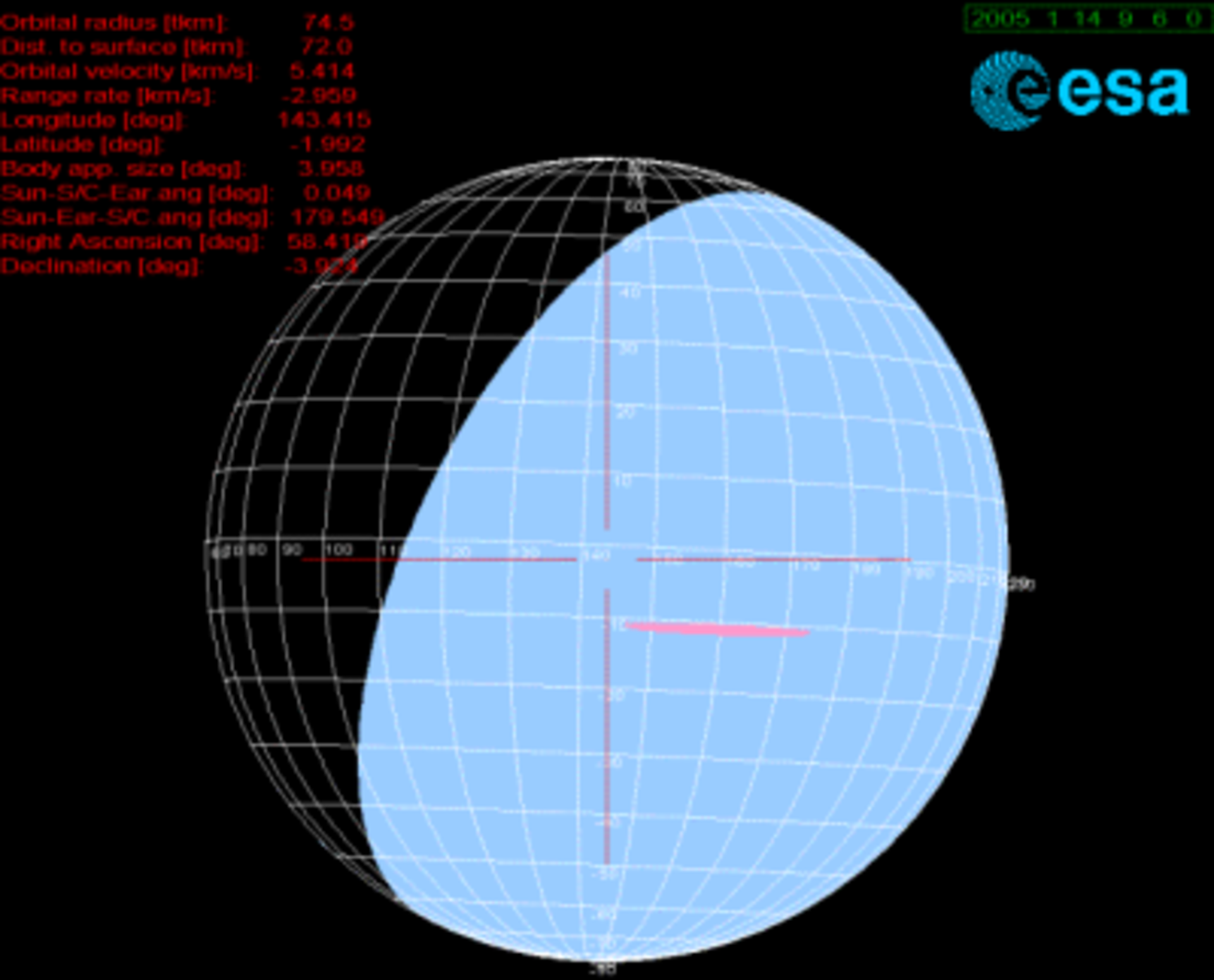 Watch a fascinating animation showing Titan, Saturn's largest moon, as seen from the NASA/ESA/ASI Cassini spacecraft on Friday, 14 January 2005, during the time that ESA's Huygens probe is scheduled to descend through the moon's atmosphere.

This animation simulates how Titan would appear as viewed from the Cassini spacecraft on 14 January 2005 between 9:06 UTC and 14:00 UTC (10:06 CET to 15:00 CET) during Huygens' descent. In reality, Cassini will not be viewing Titan as its dish antenna will be turned towards the moon to capture data transmitted by Huygens during its descent.

Huygens will start its entry into Titan's atmosphere at an altitude of 1 270 kilometres above the surface while Cassini does a flyby at a starting altitude of 71 400 kilometres.

Huygens will enter Titan's atmosphere at a relatively steep angle of 65° and a velocity of about 6 kilometres per second. The target is over the southern hemisphere, on the daylight side. Note that Huygens is not shown in the animation clip, as it would be invisible at the scale used.

In the image (above) and in the animation, a pink colour region on the surface of Titan can be seen extending from approximately longitude 130 to 170 degrees East and latitude 10 to 11 degrees South. This region indicates the probable Huygens touchdown area within 99% probability. The uncertainty takes into account variations in aerodynamic and atmospheric properties and especially the wind speed profile.

Protected by an ablative thermal shield, the probe will decelerate to 400 metres per second within three minutes before it deploys a 2.6-metre pilot chute at about 160 kilometres altitude. After 2.5 seconds, this chute will pull away the probe's aft cover and the main parachute, 8.3 metres in diameter, will deploy to stabilise the probe.

The front shield will then be released and the probe, whose main objective is to study Titan's atmosphere, will open inlet ports and deploy booms to collect scientific data. Imagery of the surface along the probe's track will also be acquired.

These data will be transmitted directly to the Cassini orbiter, which will be flying past Titan at 60 000 kilometres at closest approach.

(See link at right above to view animation file, or click on image.)