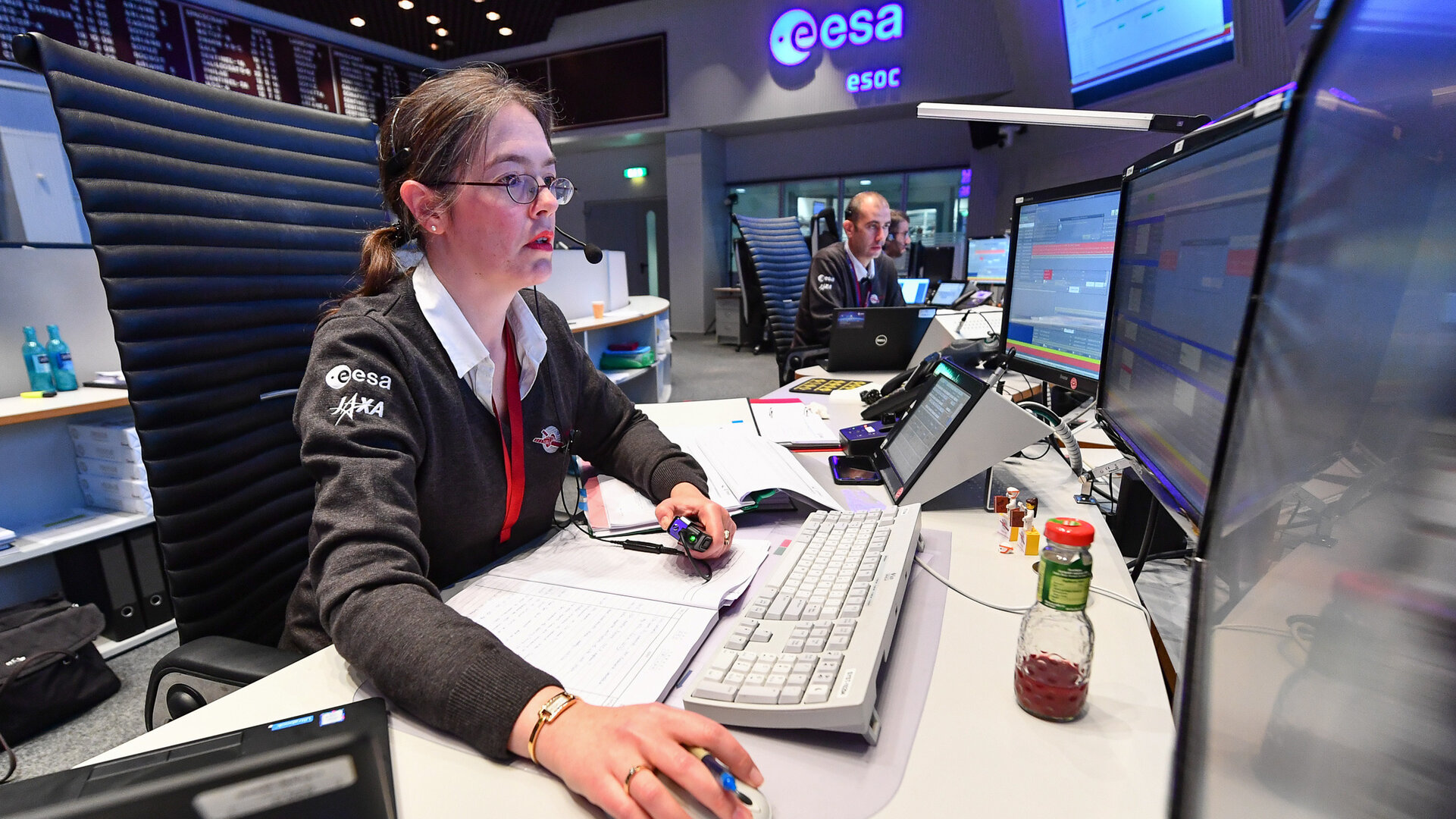 A stunning early morning launch lifted the ESA/JAXA BepiColombo spacecraft into space on Saturday, 20 October. This marked the start of intensive, round-the-clock flight control activities to ensure the mission’s health and functioning in the harsh environment of space.

At 13:45CEST on Monday 22 October, just 58 hours into its mission, the critical first segment of the fledgeling satellite’s long voyage to Mercury was wrapped up, as teams at ESA’s mission control centre declared the critical ‘launch and early orbit phase’ complete.

The end of the beginning now beckons months of extensive in-orbit commissioning activities, in which operations teams will work extended hours daily until the end of December, performing tests to ensure the health of BepiColombo’s science instruments, its propulsion and other systems.

“Lots of people think you point a spacecraft in a particular direction and off it goes, making its own way to its final destination,” says Elsa Montagnon, Spacecraft Operations Manager for BepiColombo.

“In reality, the post-launch period is extremely busy, and so, too, is the long interplanetary cruise.”

“In the next months, teams on ground will be working in 12-hour shifts, including weekends, to get the spacecraft on the right path to the smallest planet of our Solar System.”

In the hours before Saturday’s liftoff, the Main Control Room of ESA’s ESOC operations centre was centre stage for the network countdown — a synchronised sequence involving facilities at ESOC, Europe’s Spaceport in Kourou, French Guiana, and at ground stations on four continents supporting the launch.

The final GO/NOGO rollcall saw Flight Director Andrea Accomazzo check in with the flight controllers at ESOC, each confirming they were “go for launch".

Shortly after, at 3:45 CEST on 20 October, BepiColombo hitched a ride into space on top of an Ariane 5 rocket, which provided a flawless orbit injection onto the planned interplanetary transfer trajectory.

“Years of planning, and months of training and simulations led up to these fast-paced and vital moments,” recalls Elsa.

“Even after a successful liftoff and separation, we couldn’t relax. Everyone was waiting for the moment we heard BepiColombo’s first call, what we call the ‘Acquisition of Signal’.”

At 04:20 CEST, ESA’s deep space tracking station at New Norcia, Western Australia, picked up these first signals, followed by a rush of ‘telemetry’ — real-time status information and data — which was the first chance teams on the ground had to verify how the spacecraft was adapting to its new environment.

Since then, BepiColombo has not only communicated bundles of engineering telemetry, but its Mercury Transfer Module has also sent home spectacular images from a series of three low-resolution monitoring cameras, known as the “Selfie-cams.”

These images allowed flight controllers to visually verify the correct deployment of solar arrays and antennas.

Having worked around the clock since the launch of this remarkable mission, teams at ESA’s control centre in Germany are tired, but happy.

“The launch and early orbit phase was a huge success, but now comes seven years of complex operations as BepiColombo travels nine billion km to the innermost planet of the Solar System,” explains Paolo Ferri, Head of Mission Operations at ESA.

“The first ion thruster ‘operational arc’ will begin in mid-December, steering BepiColombo on its interplanetary trajectory.”

In an 'operational arc', the spacecraft's ion thruster runs at low energies for extended periods of hours and days, as opposed to traditional, high-energy chemical thruster burns that run for just minutes or hours. The benefit of an arc is it provides the same acceleration with less fuel mass.

Paolo continues, “With the combined experience from experts in operations, flight dynamics, mission data systems and deep space ground stations, BepiColombo could not be in more reliable hands.”