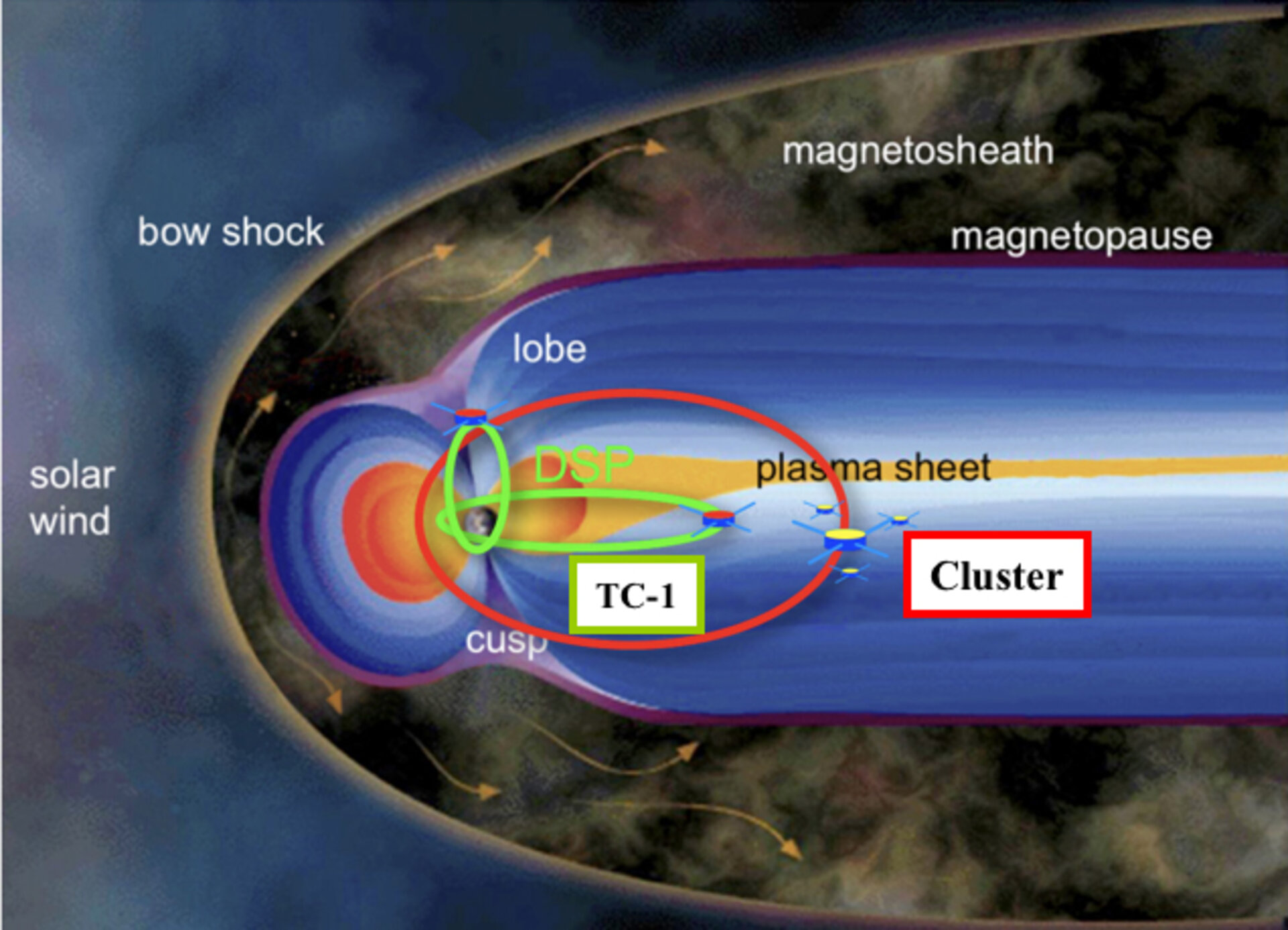 TC-1, one of the two satellites of the CNSA/ESA Double Star mission, was decommissioned on 14 October as its designed orbit lifetime came to an end. The satellite re-entered Earth’s atmosphere and turned to dust during its descent.

Along with its twin TC-2, TC-1 is the first satellite built and operated by the Chinese National Space Administration (CNSA) in cooperation with ESA. Along with its twin and the four Cluster satellites, TC-1 has helped accomplish much during its lifetime.

The four years during which Double Star was operational brought in new perspectives concerning the boundaries of the magnetosphere and the fundamental processes that are playing a role in the transport of mass, momentum and energy into the magnetosphere. Thanks to the measurements of TC-1, there was a chance to observe the evolution of structures and physical processes at small scales with Cluster, and then on large scales with Double Star.

Here we list some of the most interesting results where TC-1 played a crucial role.

Above our heads, at the bow shock, where the Earth’s magnetic field meets the constant stream of gas from the Sun, thousands of bubbles of superheated gas, or ion density holes, are constantly growing and popping. These bubbles were discovered by Cluster and Double Star together, and the discovery allowed scientists to better understand the interaction between the solar wind and the Earth’s magnetic field.

Chorus emissions are waves naturally generated in space close to the magnetic equator. They play an important role in creating killer electrons that can damage solar panels and electronic equipments of satellites and are a hazard for astronauts. It was found that these waves are created further away from Earth during high geomagnetic activity. This information is crucial to be able to forecast their impact.

Listen to the celestial chorus here

The four Cluster satellites and TC-1 unexpectedly found themselves engulfed by waves of electrical and magnetic energy as they travelled through Earth’s night-time shadow. Something had set the tail of Earth’s natural cloak of magnetism oscillating, like waves created by a boat travelling across a lake. The data collected gave scientists an important clue to the effects of space weather on Earth’s magnetic field.

"Double Star has demonstrated mutual benefit and fostered scientific cooperation in space research between China and Europe. But there is still much more to come as the full, high-resolution data archive becomes available," says Philippe Escoubet, ESA’s Cluster and Double Star Project Scientist.

Double Star is CNSA’s first scientific mission and also the first in collaboration with ESA. The mission consisted of two spacecraft investigating global physical processes in Earth’s magnetic environment and their responses to solar disturbances. The mission has lasted four years, surviving way past its nominal lifetime of one year.

ESA contributed to the development and pre-integration of eight European instruments for the mission. Ground station support was provided with the download of data for four hours each day using the Vilspa-2 ground station near Madrid, Spain. ESA also coordinated the scientific operations for the European instruments, via ESTEC and the European payload operations service at Rutherford Appleton laboratory, UK.

CNSA’s contribution included the two spacecraft buses, eight other scientific experiments, and the launches. CNSA was in charge of spacecraft control and operation of the Chinese instruments. After its nominal lifetime of one year, operations of Double Star were extended twice by both agencies until the end of September 2007.

A large number of papers have appeared in the literature since the launch of Double Star. A special issue of Annales Geophysicae on the first Double Star results was published in November 2005.

A special issue of the Journal of Geophysical Research on the latest results of Double Star and Cluster is under review and will be published in the coming months. As of September 2007, the combined list of Cluster and Double Star consists of 691 scientific papers.