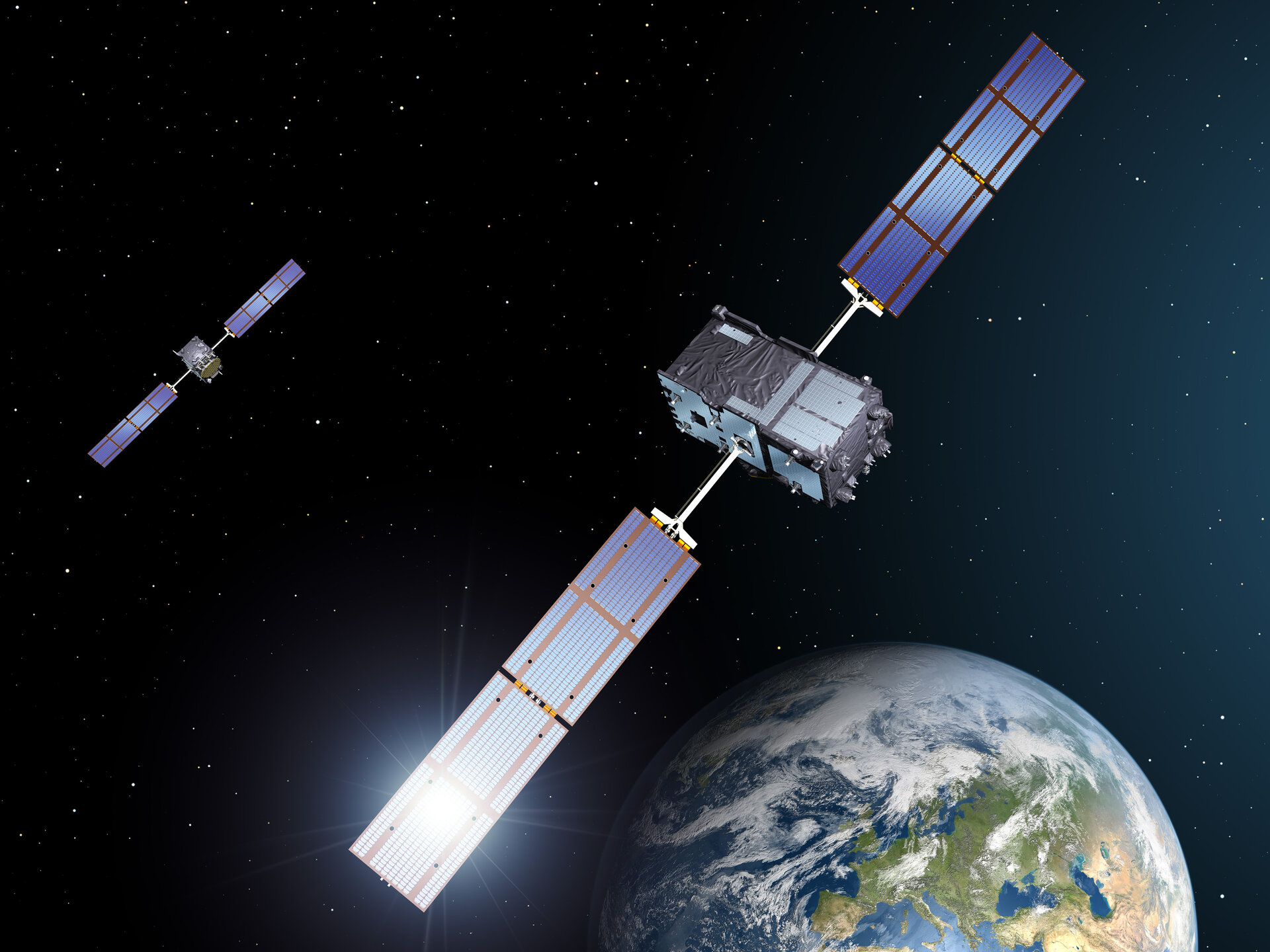 Marking the formal end of their LEOP Launch and Early Operations Phase, control of the satellites was passed yesterday from the CNES French space agency centre in Toulouse to the Galileo Control Centre in Oberpfaffenhofen in Germany.

Oberfaffenhofen, operated by the German Aerospace Center DLR, will be in charge of the satellites' command and control for the whole of their 12-year operating lives.

The two Galileo satellites were launched by Soyuz from French Guiana on 21 October. Three hours and 49 minutes after launch, their Fregat-MT upper stage carried them into their planned 23 222 km orbit, where they were released simultaneously.

At this point, a joint team from CNES and ESA’s ESOC European Space Operations Centre moved into action, beginning the crucial task of bringing the two satellites to life.

The first signals were heard almost simultaneously, confirming they were in good health – but there was still plenty of work to be done to keep them that way.

Like parachutists jumping from an aircraft, they were left tumbling through space. This spinning had to be brought under control before it was safe to deploy the power-giving solar panels, ending the satellites’ reliance on their rapidly dwindling battery power.

Once the reaction wheels steadied them, the satellites sought the Sun and began recharging their batteries, around 70 minutes after separation.

The thrusters were then tested – an important milestone because the Fregat had carried them most of the way into space but they would have to manoeuvre the last 100 km or so into their planned final orbits by themselves.

The pair then switched from Sun-pointing to Earth-pointing, using infrared sensors that detect our planet as a warm object in cold space.

After that, they settled into their normal mode, with the solar arrays tracking the Sun and the navigation antenna pointed towards Earth.

The section of satellite housing the sensitive atomic clocks – the most accurate ever flown in space for navigation purposes – is kept permanently cool in shadow to help stabilise their performance.

In this configuration, the Toulouse centre commanded a set of thruster firings to relocate the satellites to their intended orbits inclined at 56º to the equator.

The handover to Oberpfaffenhofen occurred directly after LEOP was completed, taking place at 22:00 CET on 3 November.

Ground controllers started commissioning the platform, verifying that all prime and redundant subsystems perform as expected.

The next few days will see the navigation payload being switched on, marking the start of Galileo’s In-Orbit Test campaign. This rigorous check of the navigation signals is being conducted from ESA’s ground station in Redu, Belgium.

In particular, a 20 m-diameter antenna will measure the precise shape of the navigation signals to a very high degree of accuracy.

Once the navigation payload is fully checked-out and activated, a second Galileo Control Centre in Fucino, Italy – operated by the Telespazio company – will oversee all navigation services.

"A big thank you and congratulations to the 'CNESOC' team who have professionally mastered this critical phase of the mission in an exemplary manor, which was another first in our ESA/CNES cooperation," said Manfred Warhaut, Head of Mission Operations at ESA.