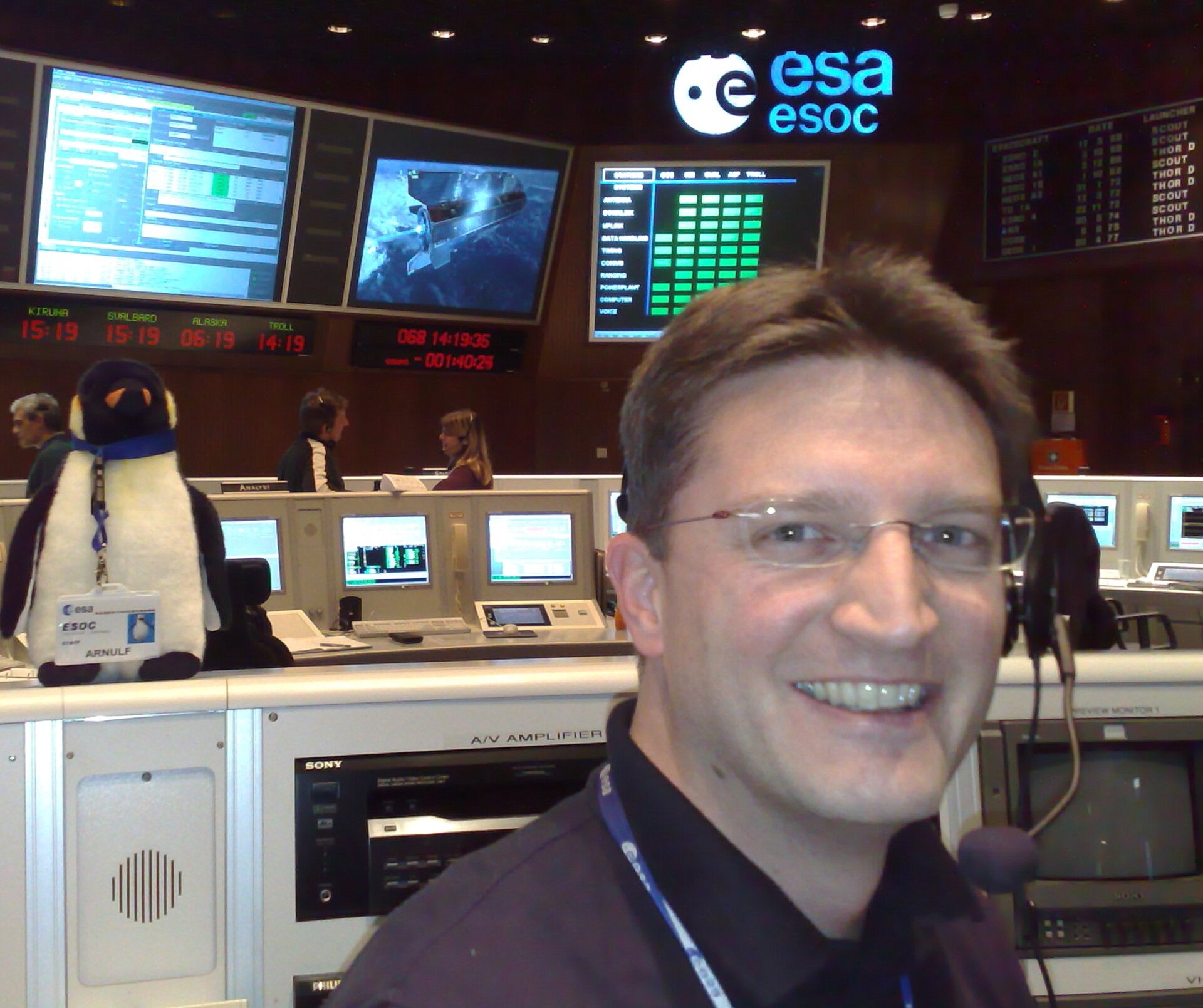 A complex mesh of ground stations, network systems and people ensures communication between ESA's Main Control Room and spacecraft in orbit. GOCE's Ground Operations Manager Daniel Firre will be among the first to confirm that critical signals have been acquired from the spacecraft shortly after launch.

Launching a satellite and then acquiring its first signals is akin to flinging it into orbit and then scanning the sky to determine where it is.

"The flight dynamics team will provide GOCE's expected track, and several stations will already be pointed and waiting prior to receiving the first signal. Our ESTRACK station at Kiruna will acquire first telemetry, followed by the station at Svalbard. It will be challenging, but we're ready," says Daniel Firre, GOCE Ground Operations Manager at ESOC, ESA's European Space Operations Centre, in Darmstadt, Germany.

During GOCE's Launch and Early Orbit Phase (LEOP), Firre will coordinate an international team of ESA and partner ground stations. These will be responsible for transmitting telecommands from the Flight Control Team in Darmstadt up to GOCE and receiving data from the spacecraft via tracking terminals located at Kiruna and Esrange in Sweden, Svalbard in Norway, Troll in Antarctica, and Fairbanks in Alaska, USA.

Listening for the first call from GOCE

Ground controllers will get an initial hint of progress when the Rockot booster fairing is released and the satellite transmitter is switched on four minutes after launch.

"We should hear the signal four minutes after launch - it will be the first signal we get, and it will definitely give us a good impression of the satellite's health, but not much more since the main part of the Rockot-powered flight still has to take place," says Firre.

This signal will be monitored by Svalbard station's 13-metre antenna. The station is located at 78° North latitude - above the Arctic Circle - and will 'listen' over a wide beam angle for GOCE's call as Rockot rises above the horizon from the South-East toward the North-West.

About 90 minutes after launch, tension will be thick among engineers and scientists throughout the Agency, particularly in the Main Control Room, as the Mission Control Team waits for the first formal AOS - communication bearing vital telemetry data - which will come via the 15-metre antenna at ESA's Kiruna station, part of the Agency's global ESTRACK (ESA Tracking) network.

Although times are subject to change, AOS is expected one hour and thirty-one minutes after launch - about 20 seconds after GOCE separates from the Rockot launcher's Breeze upper stage (all times subject to change).

"Even with everything working as planned, AOS could still come ten to fifteen seconds earlier or later, depending on booster performance and other factors. Once we have it, everyone will breathe a sigh of relief," says Firre.

What happens if no signal is received? About 45 seconds after AOS should have arrived, the Ground Operations Manager will invoke a carefully pre-programmed 'sky search' using Kiruna's antenna. The antenna will be auto controlled through a spiral search pattern, listening over progressively larger circular swaths of sky, following along the planned trajectory.

In addition, the Esrange station will provide vital information to the ground operations team thanks to a very fast search antenna. "We've practised our contingency procedures many times; if the spacecraft is there, we're confident we can find it," says Firre.

During the initial three orbits, GOCE tracking will be successively handed over from Kiruna to Svalbard and then later to Alaska and Troll. This will occur as the spacecraft orbits at an initial altitude of some 285 km and an approximate speed of 7.6 km/s (27 300 km/h), resulting in the line-of-sight 'passes' over each station lasting between six to nine minutes.

After the three-day LEOP and approximately 45-day commissioning phase, GOCE will enter into routine operations and all telecommunications will be handled via the Kiruna station, which is ideally positioned for a low-altitude, polar-orbiting mission like GOCE.

According to Firre, the toughest aspect of his job is serving as the dynamic interface between multiple teams during the launch, when many intensive discussions take place on the voice intercom 'loop' between the ground stations, the Spacecraft Operations Manager, the Flight Director, the Flight Dynamics team and various spacecraft operations engineers.

"I can also call on shift managers working in the ESTRACK Control Centre, ESOC's Network Operations Centre and other teams here at ESOC for realtime assistance if there are any hardware or software problems, so it can become fairly busy. The first acquisition will be the most demanding, but the ground operations team is ready to go."