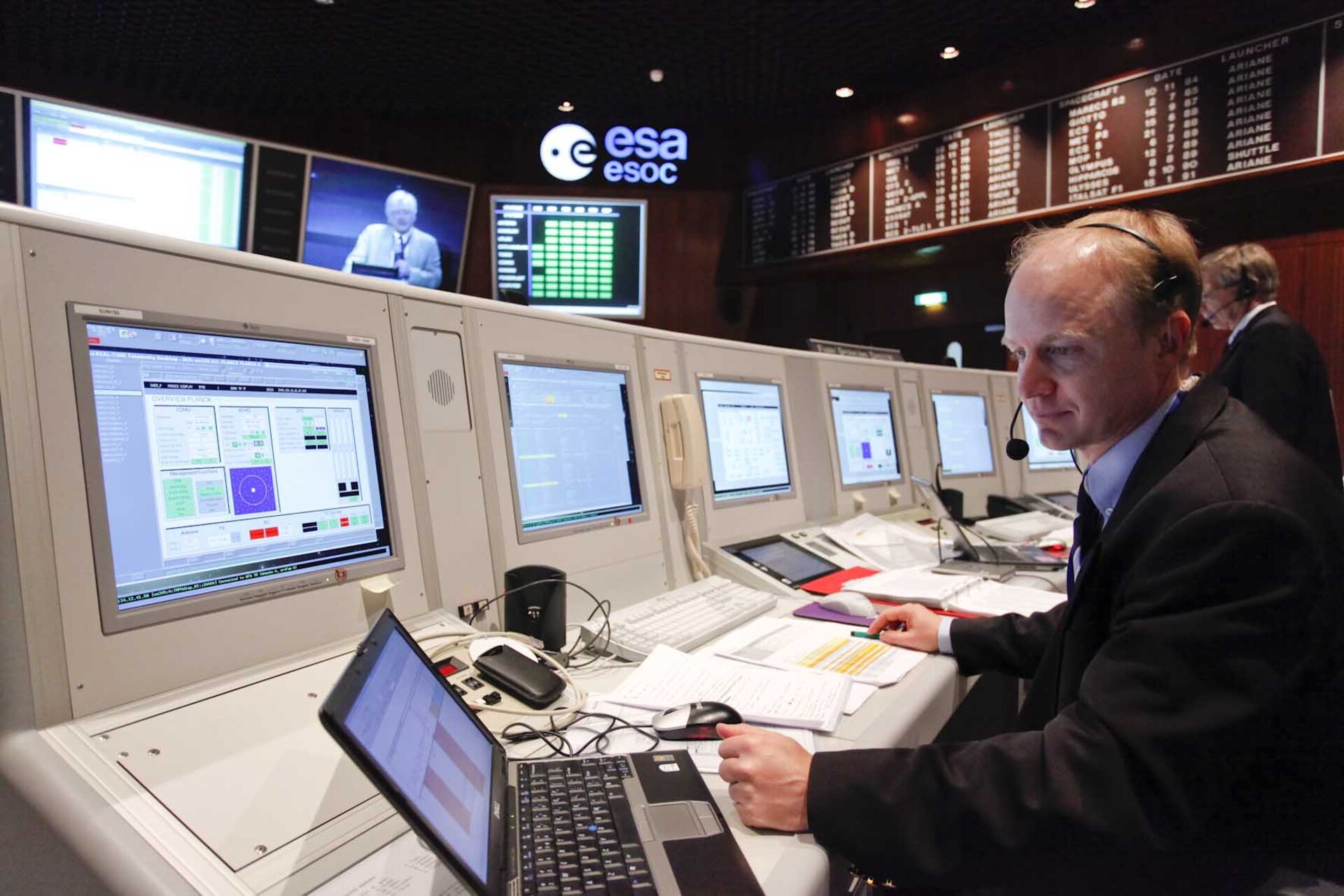 After a perfect injection by the Ariane 5 launcher on 14 May, the critical Launch and Early Orbit Phase (LEOP) for Herschel and Planck has started to wind down, while commissioning of the scientific instruments and subsystems on both spacecraft has begun.

Herschel and Planck are functioning nominally and are now en route to their final orbits around the second Lagrange point of the Sun-Earth system (L2), a point in space 1.5 million km from Earth on the night-side.

The additional ground stations that enabled near-continuous contact between mission controllers and Herschel and Planck during LEOP have been released; the two are now communicating via their nominally assigned stations, ESA’s New Norcia and Cebreros deep space stations, respectively.

Shortly after launch, both spacecraft separated according to plan: Herschel at 15:37:55 CEST followed by Planck at 15:40:25 CEST. This triggered the execution of automatic sequences on board, including acquisition of the spacecraft’s orientation in space, configuration of the data handling system and switch-on of the high-frequency radio transmitters.

The first signals from both spacecraft were acquired by ESA’s New Norcia and Perth stations at 15:49 CEST. Shortly afterwards, telemetry was received confirming good health for both spacecraft. Both had acquired their nominal sun-pointing attitude and a telemetry check-out performed by the Mission Control Team confirmed their overall status as nominal.

The operations planned for both spacecraft for the Launch and Early Orbit Phase have been completed successfully, and all time-critical procedures were completed on schedule or sooner than expected, including the SPIRE (Spectral and Photometric Imaging Receiver) launch lock release on Herschel and the activation of the HFI (High Frequency Instrument) 4K cooler on Planck.

The excellent injection provided by Ariane 5 into L2 transfer orbit means that only moderate trajectory correction manoeuvres (TCMs) – during which the thrusters are fired to change the spacecraft’s direction or speed - will be required giving ground controllers a larger margin of fuel for the scientific part of the mission.

Subsystem commissioning began on 15 May for both satellites, and telescope and payload module cool-down started in parallel on both spacecraft.

As planned, Herschel switched to reduced ground station coverage of 10 hrs/day on 16 May. This will continue until two weeks after launch for the initial commissioning activities. All of the satellite’s subsystems have shown nominal performance, and commissioning is in progress.

After the first TCM (1a), Planck’s trajectory was optimised based on the latest orbit determination. This first manoeuvre was very modest due to the excellent launch injection and was so accurate that no touch-up manoeuvre was required during LEOP; the planned TCM 1b was cancelled.

The following manoeuvres will be the mid-course correction (manoeuvre 2) and the insertion manoeuvre (manoeuvre 3), scheduled for 5 June and 2 July at 19:00 CEST, respectively.

Another major milestone was completed with the commissioning of the ‘large’ slew capability. These slews, a few arc minutes in magnitude, are executed with small (1N) thrusters; they are large compared to the requirement for the mission. These large slews are necessary for Planck to follow its scanning strategy and recover fine control after monthly orbit maintenance manoeuvres performed with the bigger (20N) thrusters.

The HFI instrument has also been switched on and is fully functional. HFI is now waiting for the rest of the cooling chain to be switched on and to cool to its final operational temperature.

All of the satellite’s subsystems have been commissioned normally and ground station performance is nominal.