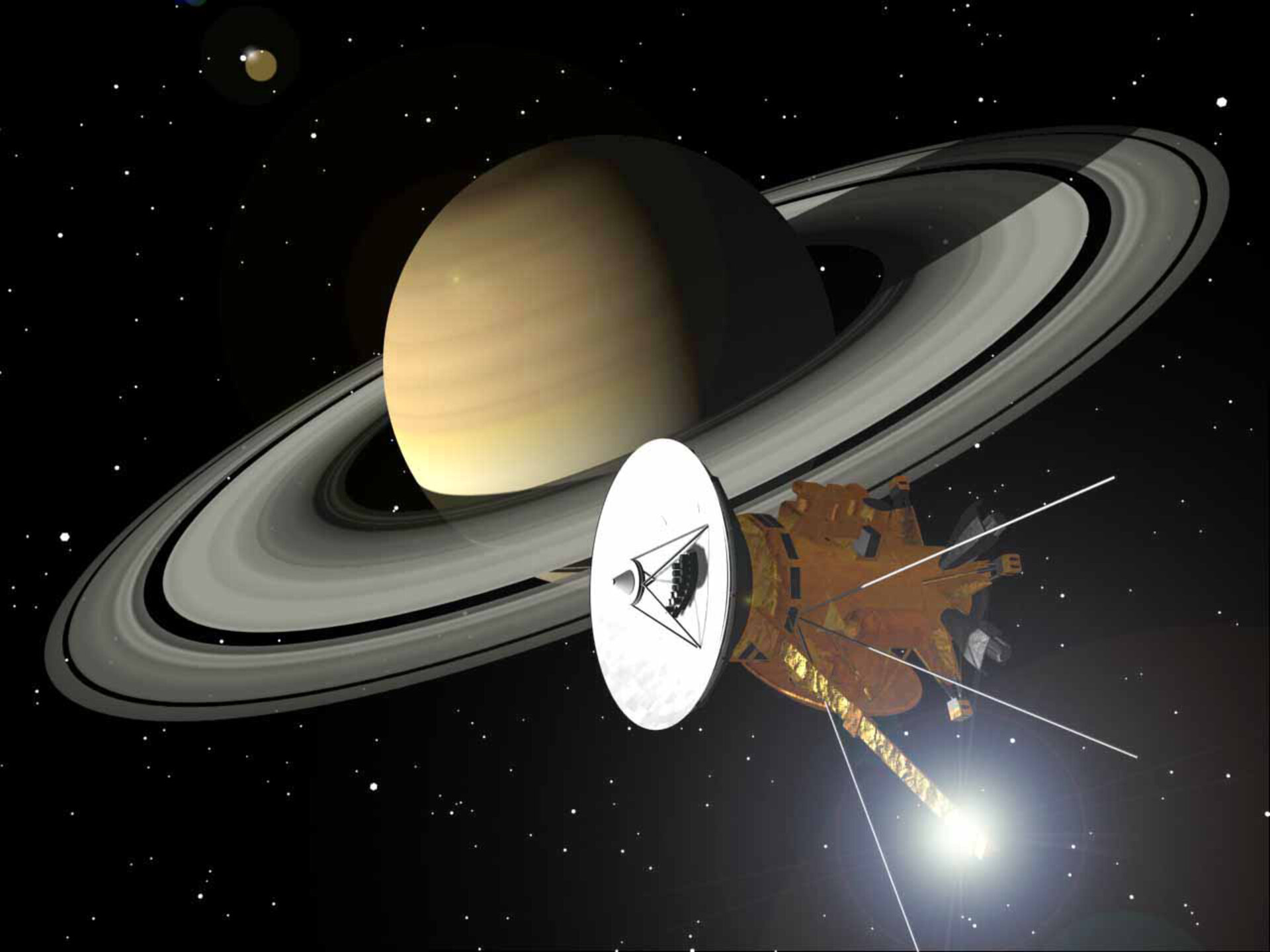 The NASA/ESA/ASI Cassini-Huygens spacecraft entered orbit around Saturn on 1 July, crossing twice the planet's rings. The data collected yesterday at ESA's European Space Operations Centre show that this delicate and risky manoeuvre proved harmless for all instruments on board and mission control specialists gave Huygens a perfect bill of health.

During its long journey with Cassini, starting on 15 October 1997, the proper working of the Huygens probe and of its scientific instruments has been regularly verified, fourteen times to be precise. Check-out number 13, the last before arriving at Saturn, was executed in March and showed that all systems were performing as expected.

Yesterday's check-out, however, was special, since it took place after Cassini-Huygens transited twice through the rings of Saturn on 1 July. Although the rings appear solid from a distance, they are formed by millions of tiny frozen dust particles and ice blocks, some the size of a grain of sand and others as big as a house.

To minimise any risk that some of these fragments would hit critical subsystems or on-board instruments, mission specialists sent Cassini-Huygens through a 'gap' in the rings. The gap was known to be safe and other deep-space probes, such as NASA's Pioneer 11, had already passed through it unharmed before.

Nevertheless, Cassini-Huygens crossed the rings with its four-metre wide high-gain antenna facing forward, acting like a shield, and more than 100 000 hits were recorded in less than five minutes. This avalanche of very small particles, detected by the on-board Radio and Plasma Wave Science instrument, has been converted into audible sounds that literally resemble hail hitting a tin roof.

Huygens, however, was well protected by its thick heat shield, an even better dust shield than the high-gain antenna. Thus, the probability that some stray particles hitting Huygens might have damaged its delicate instruments was practically negligible.

Indeed, the excellent performances of Cassini and its instruments after the ring plane crossings already indicated that the spacecraft survived this extreme environment. For this reason, mission specialists at the European Space Operations Centre in Darmstadt, Germany, were already feeling confident yesterday, when the probe check-out data started to pour in at 18:43 CEST.

The transmission from the spacecraft continued until past midnight (00:18 CEST on 15 July) and comprised data from Huygens' on-board computers and all six scientific instruments. All of them underwent the standard cruise check-out procedures, which returned excellent results.

The next probe check-outs, scheduled for 14 September and 23 November, are two major steps in preparation for the release from Cassini on 25 December this year. The cruising phase to Titan will then last 21 days, followed on 14 January 2005 by the descent through its dense atmosphere.

The Cassini-Huygens mission to Saturn is the most ambitious effort in planetary space exploration ever mounted and is a joint endeavour of the European Space Agency (ESA), the National Aeronautics and Space Administration (NASA) and the Italian space agency, Agenzia Spaziale Italiana (ASI). The Jet Propulsion Laboratory (JPL) is managing the mission for NASA's Office of Space Science.

Cassini-Huygens is a sophisticated robotic spacecraft orbiting the ringed planet and will study the Saturnian system in detail over a four-year period. On board Cassini is a scientific probe, called Huygens, that will be released from the main spacecraft to parachute through the atmosphere to the surface of Saturn's largest and most interesting moon, Titan.

To learn more about the Cassini-Huygens mission please see:

More information about the sounds recorded by Cassini-Huygens during the ring plane crossings can be found at this address: