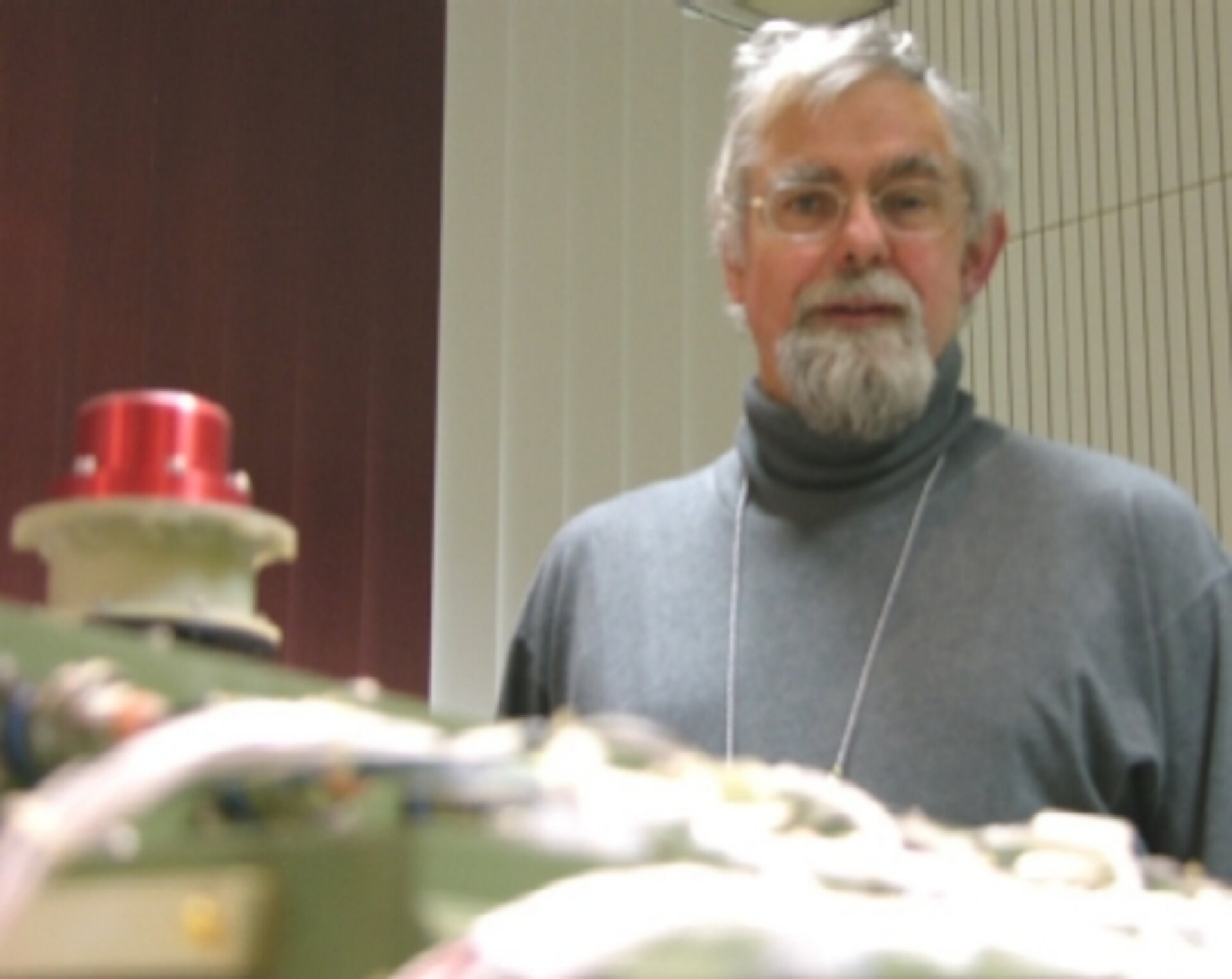 On 14 January 2005, while the real Huygens probe is descending through Titan's atmosphere 1 250 million kilometres from Earth, an exact engineering copy will be on hand in Darmstadt, Germany, ready to serve as a troubleshooting test bed for spacecraft operations engineers.

Joe Wheadon, a veteran ESA engineer of 32 years, points to the Huygens Engineering Model (EM) sitting just outside the mission's Dedicated Control Room. "It is a true, one-to-one copy; everything functions just as on the flight model," he says, adding "It is a big advantage for us having the Engineering Model located here."

Wheadon should know. He is Huygens Local Operations Manager for the joint NASA/ESA/ASI Cassini-Huygens mission. He and a team of operations engineers have used the EM many times during the seven-year journey to Saturn.

After hitching a ride to Saturn on Cassini, Huygens successfully separated from the spacecraft on 25 December 2004 and is now on a controlled collision course toward Titan, where on 14 January 2005 it will make a descent through one of the most intriguing atmospheres in the Solar System; Titan is the largest moon of Saturn and is the only moon known to have clouds and a thick, planet-like atmosphere.

Wheadon says the purpose of the EM is to allow engineers and experiment Principle Investigators (PIs) to validate Huygens' commands prior to sending them up to the actual spacecraft.

The EM provides a means to simulate operations on the ground and verify effects of command sequences before transmission.

The Huygens telemetry data generated during each EM test run are monitored and processed by the Huygens Monitoring and Control System (HMCS). Afterwards, the data is packaged in batches and forwarded to the spacecraft prime contractor, Alcatel Space, and the PIs for detailed engineering analysis.

The EM has typically been used for flight check-outs, run about twice per year since launch, when the probe platform and instruments are turned on and run through various checks.

It has also been used to support preparations for other in-flight operations such as on-board software patching for both the probe platform and instruments and for various investigative tests to characterise and confirm the flight systems' expected behaviour.

The EM includes a copy of the Huygens Probe Support Avionics (PSA) mounted on Cassini that handle the incoming stream of probe data. The copy PSA, however, sit somewhat prosaically on a 1-metre-long wooden table rather than on the sophisticated Cassini spacecraft travelling near Titan.

The Huygens EM has been used in recent weeks to validate command sequences for the following flight operations:

What is battery depassivation? Wheadon explains that Huygens' batteries, after sitting passive for the seven-year flight to Titan, had to be carefully run up under high load in order to break down chemical deposits that unavoidably build up over time. "The depassivations went fine and the batteries are ready to go into business," he said.

The two parts of the Huygens EM in Darmstadt are interconnected by cables providing power supply and telecommand links to the probe, and by a radio-frequency (RF) coaxial cable for the telemetry data coming from the probe.

These cables emulate the actual 'umbilical' cable that connected the real Huygens to the real Cassini PSA prior to separation. Thus, Huygens' true engineering environment is replicated. "The responses we get from the model are real," says Wheadon, adding, "Of course, we can't fully replicate the physical conditions in space. But the onboard behaviour is accurate."

Perhaps the most significant usage for the EM was in 2000 when ESOC engineer Boris Smeds, Head of the Systems and Requirements Section, used it to design a test that he performed on the Huygens-Cassini radio link.

During this test he discovered a design flaw that would have made the data from Huygens unreadable. Later tests on the EM further helped confirm and troubleshoot the previously hidden communication problem.

The problem, caused by inappropriately selected parameters coded into the PSA radio receiver firmware, would have affected communication between the Huygens Probe and the Cassini spacecraft. It would have rendered the probe's data unrecognisable due to the effects of Doppler shift in the probe signal arriving at Cassini during Huygen's descent.

The problem has been resolved by increasing the altitude of Cassini's flyby above Titan during Huygens' descent, thus reducing the Doppler shift to acceptable levels.

After Huygens' mission to Titan, the EM may also be used to help engineers analyse the data that the real probe will have transmitted during its approximately 2.5-hour descent on 14 January and to reconstruct the behaviour of the on-board systems.

Ultimately, the EM may end up in a museum or on display, serving as a fascinating and educational reminder of ESA's first probe mission through one of the most intriguing atmospheres in the Solar System.