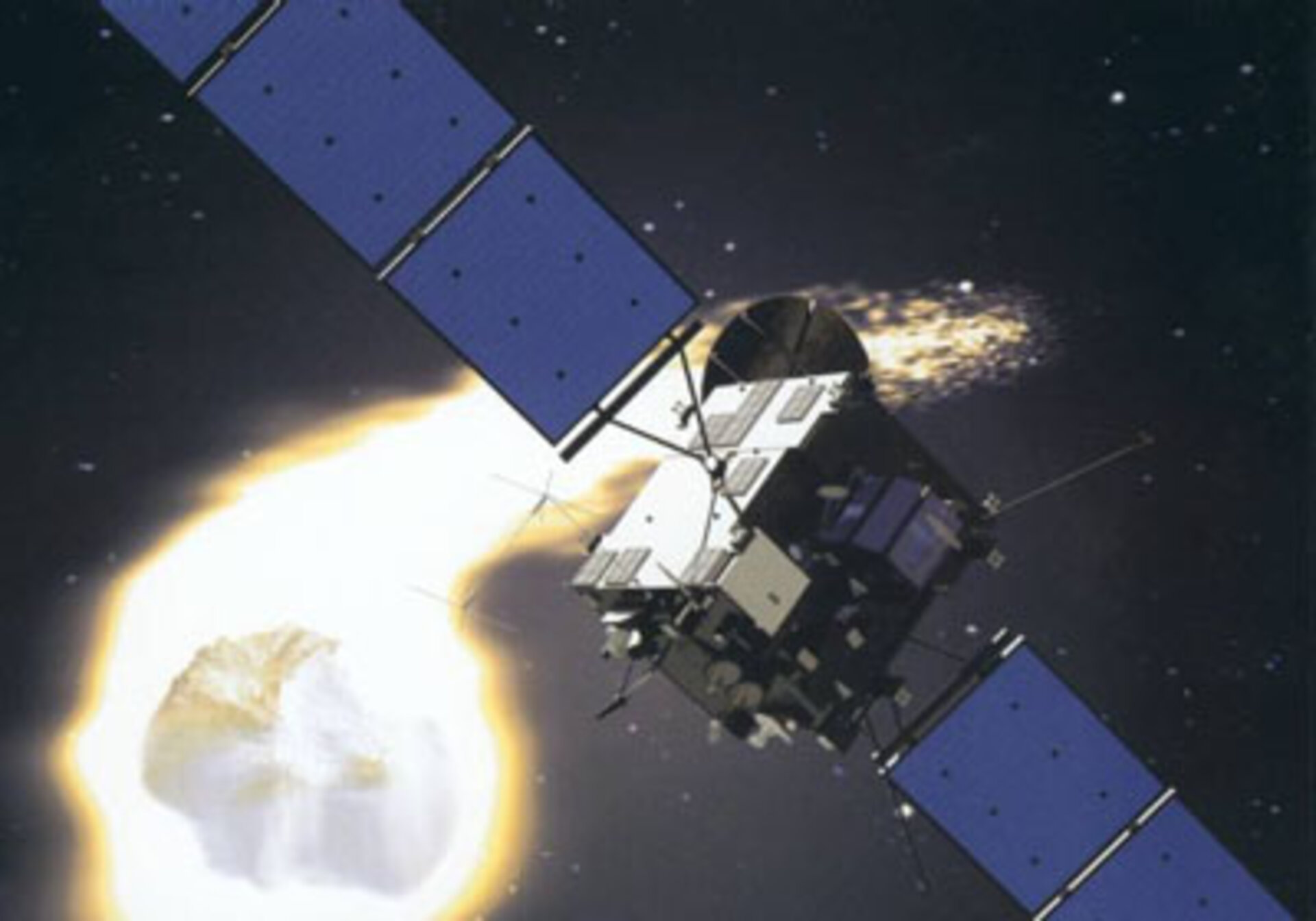 Engineers at ESA's European Space Operations Centre in Germany are working to a tight deadline as ESA's comet-chasing spacecraft Rosetta swings steadily closer to a spectacular asteroid fly-by on 5 September 2008.

Preparations for the fly-by of asteroid Steins are ongoing - and intensifying - for the men and women of the Rosetta Flight Control Team based at ESOC, where spacecraft operations are controlled from the Rosetta Dedicated Control Room (DCR).

The five-person team of Spacecraft Operations Engineers is led by veteran Spacecraft Operations Manager (SOM) Andrea Accomazzo, and is directly supported by a pool of Spacecraft Controllers (referred to locally as 'spacons') who are shared between ESA's three deep-space missions, Rosetta, Mars Express and Venus Express. The Flight Control Team is in turn supported by several extended teams of specialists based at ESOC, including experts from Flight Dynamics, Software Support, Mission Analysis and Ground Station Operations.

Before then, a series of demanding activities must take place in the right order and on schedule. Between 9 July and 3 August, ESOC engineers will work closely with the Rosetta Science Operations Centre (SOC), at ESA's European Space Astronomy Centre, near Madrid, Spain, to check-out and verify the spacecraft's 11 instruments.

The Flight Control Team will conduct simulations on 7, 14 and 21 August to confirm and practise procedures and reactions to any unforeseen problems that may occur.

"We will practise placing Rosetta's cameras into their proper tracking mode and, as we get closer to Steins, we will actually start tracking the asteroid, and use the data to refine our estimates of Steins' orbit and how to adjust Rosetta's trajectory," said Sylvain Lodiot, an engineer assigned to Rosetta.

A series of Trajectory Correction Manoeuvres (TCM) - in which the probe's thrusters can be fired to align its trajectory relative to Steins - are possible on 14 and 28 August as well as 2, 4, and 5 September. The last TCM slots come just 36 and 12 hours before closest approach; the tight telecommand uplink windows for these must be tested and practiced.

Shortly before the fly-by, the team will have to upload command sets to Rosetta for the fly-by itself; this must also be exercised during the simulations.

The Flight Dynamics teams at ESOC are instrumental. They are the ones who calculate where the spacecraft is and tell us where to go.

As the spacecraft closes on Steins, the timing of mission control activities will become much more critical.

The team have adopted an innovative strategy of defining 'payload break points' - basically, a series of default payload configurations at a given point in time - that can be used to recover payload operations if any anomalies arise.

"We have break points set to the times of the Trajectory Control Manoeuvres and one set just 2 hours prior to closest approach. This work has involved a lot of cooperation between us, the science and flight dynamics teams," said Lodiot.

Intense science observations will begin some 2 hours prior to closest approach and run until about 2 hours after. Images gathered by OSIRIS and VIRTIS will be among the first to be downloaded after fly-by, and should be available on 6 September if all goes nominally.

Rosetta's Philae lander will also be activated for the fly-by, under control by the Philae lander control room at the German Aerospace Center (DLR) establishment in Cologne. During this phase of the mission, the control room will support three experiments, ROMAP, MUPUS, and SESAME (see links at right for more details on instruments on board Rosetta and Philae).

Ground station coverage is a critical factor in the coming weeks, as the spacecraft begins to generate data gathered from pre-approach asteroid tracking, as data is generated during fly-by and for ranging and navigation calculations throughout. On 5 September, when Rosetta and Steins are about 360 million km from Earth, the one-way radio communication time delay will be 1200 seconds, or 20 minutes.

The number of passes provided from both ESA and NASA stations will steadily increase, with ESA's second 35m deep space antenna at Cebreros, Spain, joining in September.

"Toward the end of August, we have communication slots with Rosetta every day of the week, and around fly-by, we will be in more or less continuous contact with the spacecraft via New Norcia, Cebreros and Goldstone," said Lodiot.

During the critical days of 4 and 5 September, the Rosetta control team will split into 'Blue' and 'Red' halves, with each sharing responsibly for full-time operations in the Dedicated Control Room.

Blue Team will cover from the evening of 4 September until early on 5 September, when the final critical TCM may be necessary, while Red Team will cover the the day of 5 September; everyone will be present for the actual fly-by at 20:58 CEST.

"Although the focus is on the core Flight Control Team, we couldn't function at all without support from the rest of ESOC or from our colleagues on ESA's science teams. In particular, the Flight Dynamics teams at ESOC are instrumental," said Operations Manager Accomazzo. "They are the ones who calculate where the spacecraft is and tell us where to go."