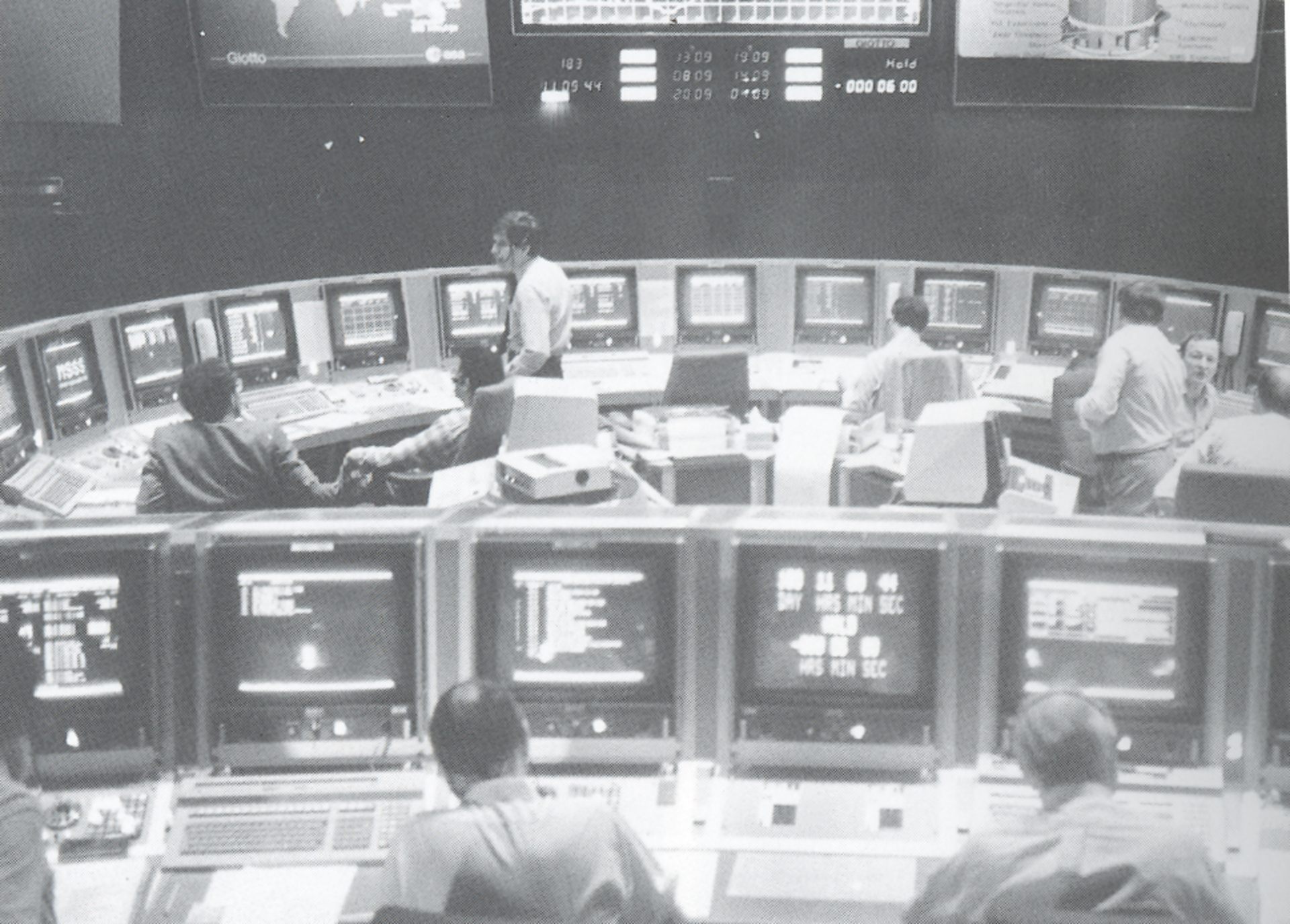 Once Ariane launch controllers in Kourou's 'Jupiter' control room have initiated liftoff, their main job is complete. But thousands of kilometres away, mission controllers in ESA's Main Control Room start an intense vigil, waiting through eternal minutes for the satellite to come to life and signal home.

For thirty years, Europe's Ariane booster family has provided reliable launch services for many of ESA's most complex and sophisticated satellites.

During these decades, the critical activities of two sets of engineers — the launch controllers in the Jupiter control room at the Centre Spatial Guyanais (CSG), Kourou, and the mission controllers in the Main Control Room (MCR) at the European Space Operations Centre (ESOC), Darmstadt — have been closely related in a unique 'made in space' relationship.

These two teams remain in contact via voice and video, and ESOC is formally required to confirm during the Ariane countdown that the 'ground segment' (the tracking stations, systems and people that control the satellite in orbit) is ready for launch. If ESOC reports 'NO GO', the launch will be delayed — or even cancelled.

In the final hours leading up to Ariane liftoff, engineers from ESA and CNES (the Centre National d'Etudes Spatiales) at Jupiter pass regular updates on the launcher's status to ESOC, keeping mission control fully informed of what is happening.

After liftoff, Jupiter's formal job is done - and ours begins

"Our communication with Jupiter is rather extensive as we wait for launch. Before liftoff, we conduct our own GO/NO GO roll call, and then report to Jupiter that ESOC is ready. After liftoff, Jupiter's formal job is done - and ours begins. The pressure's really on as we wait for the acquisition of signal," said John Dodsworth, ESA Flight Director at ESOC during the Herschel/Planck dual launch on board Ariane flight V188, 14 May 2009.

Dodsworth explained that one of the launch criteria for Ariane is that human-to-human communication between ESOC and Jupiter must be in place and available at all times. "It doesn't matter whether it's by telephone, voice loop or even fax machine — we have to be in contact. If this can't be confirmed, it would also cause a 'NO GO' condition," he said.

"Direct communication with Jupiter is very important for ESOC. If there is to be a launch delay, for any technical reason, it's important to find out quickly how long the delay might last. We then have to prepare our ground segment systems for the next attempt," said Paolo Ferri, a veteran ESA Flight Director and now Head of the Solar and Planetary Mission Operations Division at ESOC.

Ferri was 'on console' and in communication with the Jupiter room during the launch of ESA's Cluster and Rosetta missions, in 1996 and 2004, respectively.

ESOC maintains contact with the satellite on board Ariane

Before launch, the team at ESOC also maintain direct network communication with the satellite payload via umbilical cables running from Ariane to the umbilical mast, part of the launch tower. These cables are kept connected until seconds before liftoff, and are usually highlighted in launch video transmissions — these can be seen falling away as Ariane's powerful engines ignite.

Conversely, after launch, engineers at Jupiter are very keen to hear from ESOC how the satellite is doing. During the thunderous liftoff, the ascent into space, separation and the start of the satellite's crucial automated activation sequence (when solar panels are deployed and critical systems switched on), there is little that anyone on the ground can do.

It is only after the satellite's signal is first acquired by a ground station and it starts transmitting that mission controllers can be sure the launch was a success, and this news is passed back to Kourou as soon as possible.

"We've always relied on Ariane to inject ESA missions into the proper orbit, and we saw this again as recently as May 2009, when Herschel and Planck in a dual launch scenario were both injected onto almost perfect trajectories allowing subsequent transfer into orbits around the L2 Lagrange point," said ESA's Manfred Warhaut, Head of the Agency's Mission Operations Department at ESOC.

In 30 years, ESOC has always been able to report 'full readiness' to Jupiter, and all Ariane launches have taken place with the ground segment ready to operate the mission.

Ferri does recall one launch, however, when one of the ESA ground stations waiting to acquire the satellite unexpectedly became 'unavailable' due to a sudden technical problem.

"According to the official procedures, we had to report to Jupiter that the ground segment was not ready for launch. This caused a lot of worry, as you can imagine. Luckily, it was still early in the countdown, and a while later we got the ground station back on line and reported 'ready' to Jupiter. It was very tense, but in the end, we solved the problem," he said.