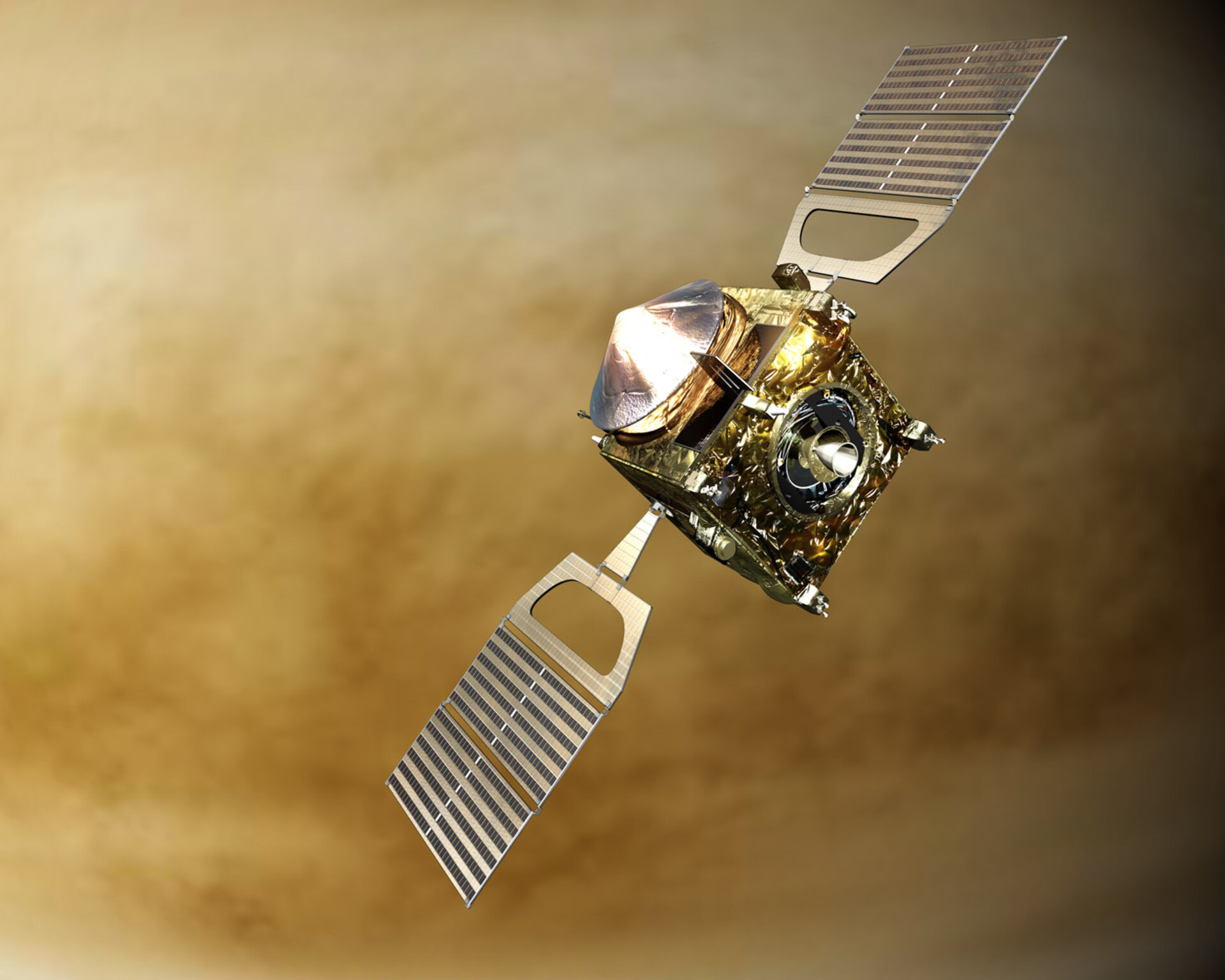 Venus Express mission controllers at ESA's Space Operations Centre (ESOC) are in intensive preparation for an 11 April arrival at the spacecraft's namesake destination.

Next month's Venus Orbit Insertion (VOI) will mark the arrival of the first ESA mission at Venus, one of the Solar System's most enigmatic planets.

Orbit insertion comprises a series of telecommands, engine burns and manoeuvres designed to slow the spacecraft from a velocity of 29 000 km per hour relative to Venus just before the first burn to an entry velocity some 15 percent slower, allowing it to be captured into orbit around the planet.

Controllers will command the spacecraft to 'slew' (rotate) so as to point the engine nozzle in the direction of motion starting at 08:03 (all times CEST on Earth) 11 April. Venus Express will perform an approximately 51-minute main engine burn starting at 09:19.

The spacecraft's solar arrays will also be positioned so as to reduce the possibility of excessive mechanical load during engine ignition.

Over the subsequent days, a series of additional burns will be done to lower the orbit apocentre (point furthest from the planet) and to control the pericentre (point closest to the planet). The aim is to end up in a 24-hour orbit around the 'hothouse' planet early in May.

All steps must take place in the correct sequence and the spacecraft must be brought into the correct configuration in time for the main engine burn, which itself can only happen at a specific moment. The risk is that, if any problems occur, the spacecraft could miss its 'window' for capture, making any recovery extremely challenging.

During the engine burn, the spacecraft will also enter an occultation, which occurs when Venus Express travels behind the planet so that the line of site to Earth is blocked; it will lose radio contact for almost 10 minutes. Controllers will closely watch for reacquisition of radio contact once the occultation ends at 09:56.

"Venus orbit insertion is a complex step. The main challenge is that the manoeuvre must happen at the right time," says Jean-Baptiste Gratadour, Attitude and Orbital Control Systems Engineer for Venus Express at ESOC and one of the dozens of engineers and scientists now readying for arrival at Venus.

To prepare for orbit insertion, the spacecraft has had to pass a series of important tests and milestones.

"In the night between 16 and 17 February, Venus Express passed its VOI readiness review after a successful burn of its main engine, providing a thrust of 400 Newtons," said Don McCoy, Venus Express Project Manager. "This was followed by a minor mid-course correction provided by the spacecraft's four 10-Newton thrusters on 24 February."

Recent rehearsals have included establishing the communication link between the Venus Express control room at ESOC and the 70-metre deep-space antenna at Madrid, part of NASA's Deep Space Network (DSN).

This ground station will support VOI due to its geographic location. For routine operations, Venus Express communicates using X-band via ESA's new 35-metre deep-space antenna at Cebreros, near Madrid (Spain).

The link was tested by broadcasting a live signal from the Venus Express low-gain antenna to Madrid and then into ESOC.

This test was fundamental because, during orbit insertion, the low-gain antenna will be used to track the spacecraft's velocity. The Venus Express high-gain antenna, normally used to communicate with Earth, will in fact be rotated away and out of line of sight of ground stations during the operation.

"We are also conducting continuous tracking of the spacecraft position through different techniques and using several ground stations, including ESA's Cebreros station and NASA Deep Space Network stations at Goldstone (USA) and Canberra (Australia) and Madrid," says Andrea Accomazzo, Venus Express Spacecraft Operations Manager. "All our efforts are in fact now concentrated on the spacecraft navigation to prepare for the big day of arrival at Venus," he added.

During orbit insertion, the spacecraft will be 125 000 000 kilometres from Earth and the round-trip signal time will be 13 minutes and 32 seconds.