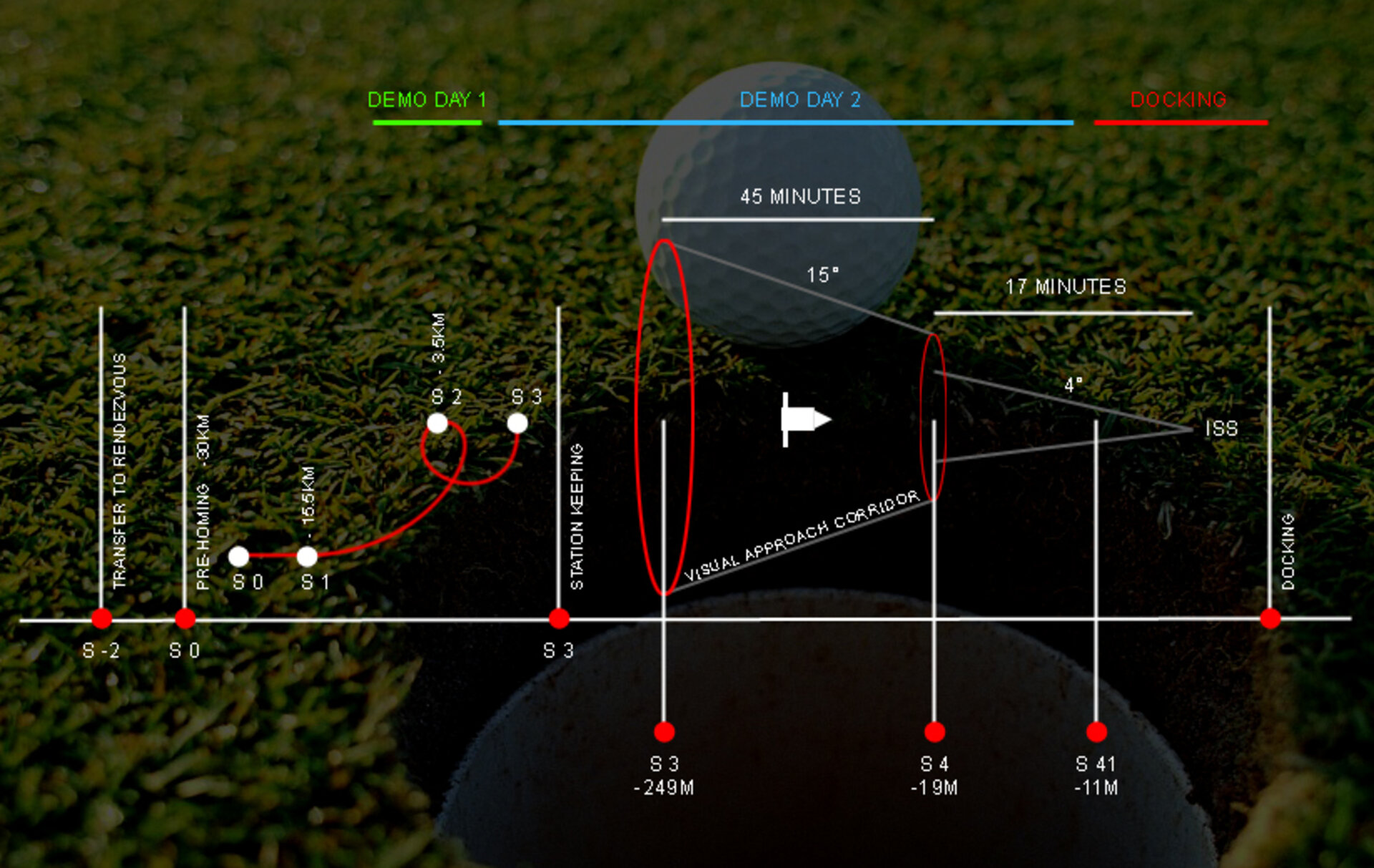 Jules Verne ATV is lining up for Europe's first-ever automated docking in space. Following two demonstrations, the final 'putt' must be more accurate and gentle than on any rolling golf green.

Now that the vessel is 'on the green' - in a parking orbit 2000 m ahead of the ISS - ATV mission controllers must pace the spacecraft through two pending and crucial demonstration dockings, moving successively closer to the ISS, and then finally go for an actual rendezvous and docking attempt on 3 April.

Imagine the muscles, tendons, nerves and bones that must work in exquisite coordination and timing in a golfer's body to cause the ball to ultimately roll into the hole. It's the same with the ATV rendezvous and docking: A large number of people, computers, networks and systems must work in tight synchronisation - with fraction-of-a-second timing - to set Jules Verne on the last automatic leg of its docking.

The challenge is enormous and a successful first attempt will depend on very tight teamwork, excellent coordination and a superb understanding of the spacecraft and its complex automated control systems.

"The spacecraft is functioning perfectly, the team is very well trained and we are looking forward to an excellent first docking attempt on 3 April. It will be complex, but after our successful launch and early orbit phase, and the transfer to the parking orbit, the entire team here on the ground has gained a lot of confidence in themselves and in Jules Verne," says Alberto Novelli, ESA's Mission Director at the ATV Control Centre (ATV-CC) in Toulouse, France.

The ATV's automated Collision Avoidance Manoeuvre (CAM) capability was successfully tested in-flight on 14 March, and other functions of the sophisticated docking control system will be tested in two Demonstration Days, on 29 and 31 March. The manoeuvres are planned using a series of way-points and station points in the vicinity of the ISS, indicated as S-1, S0, S1, S2 and so on, which map out a complex series of dynamic orbital trajectories and zones.

Note all times and dates subject to change.

The main purpose of Demo Day 1 is to test the ATV's Guidance & Navigation System; the test will be commanded from ATV-CC. This is expected to show that the ATV can perform relative navigation with the ISS using relative GPS (global positioning satellites) to successfully and safely manoeuvre ATV to station point S2, located 3500 m behind the ISS and at the same orbital altitude.

After Demo Day 1, the results will be assessed by the ESA JADOR (Jules Verne ATV Demonstration Objectives Report) team and submitted to the ISS Mission Management Team; after an assessment and authorisation on 30 March, ATV can proceed to Demo Day 2.

Note all distances given with respect to the distance from the ATV's docking probe tip to the passive docking assembly on the Russian service module; this is called 'Relative Range.'

The main purpose of Demo Day 2 is to test the Close Range Sensors and ATV's Guidance & Navigation System; the test will also include practising contingency procedures commanded by ATV-CC and by the ISS crew, as well as ATV close proximity manoeuvring. After passing station points S3, at 249 m, and S4, at 19 m from the ISS, ATV will be commanded to close to S41, 11 m from the docking port of Zvezda (the ISS Russian Service Module), then go back to S4, and finally an 'Escape' manoeuvre will be commanded to take ATV away from S4, away from the ISS, around the ISS and back to station point S1.

Once ATV has been assessed as fully ready for docking, the first attempt is scheduled to be made for 3 April.

The docking procedure will begin at 13:19 CEST, with ATV starting from station point S1, 30 km from the ISS. The ATV computers will use use Videometer and Telegoniometer data for an automated final approach and docking, going through the same station points as on Demo Day 2. ATV will slow down to 7 cm/second as it closes to within a few metres of the Russian module. ATV-CC mission controllers will direct the ATV in a step-by-step predefined approach, and will seek authorisation from the Russian Mission Control Centre in Moscow (MCC-M) before final contact.

At all stages, the ISS crew will be deeply involved. Their tasks will include control and monitoring of the ATV during Demo Day 1, 2 and docking, preparation of the Russian module for docking and issuing specific ATV commands, such as Abort, Hold, Retreat or Escape, when requested.