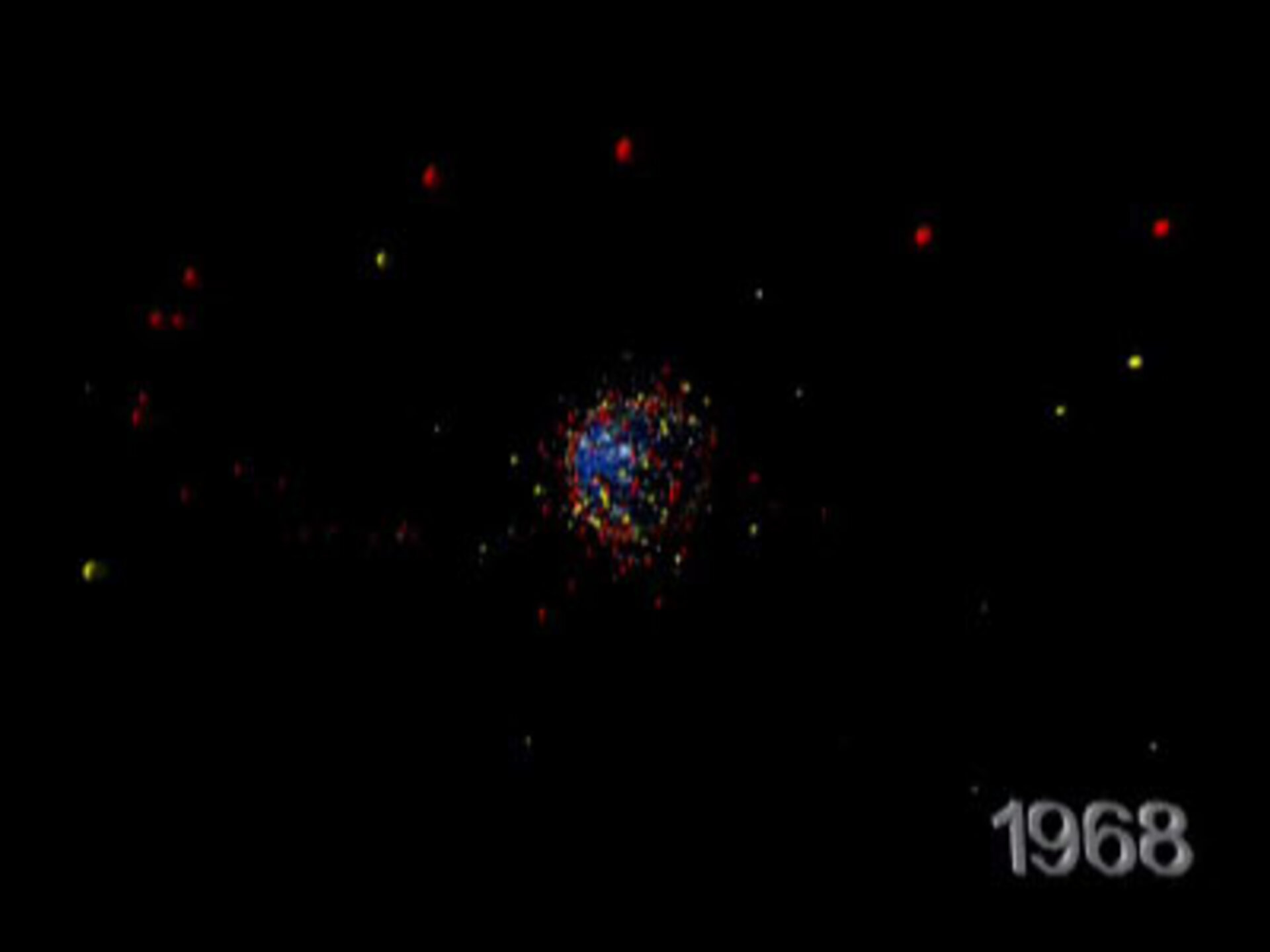 At closing speeds reaching 50 thousand km per hour, even the smallest bits of space debris can cause serious harm to spacecraft; larger ones cause catastrophe. Near-Earth missions, like the International Space Station, now carry ever-more sophisticated shielding. Not only is space debris a hot topic, it is also a fascinating — and growing — field of space science. (Part 1 of a 3-part series.)

Professor Walter Flury, the European Space Agency's resident expert on space debris, casually uses rather startling terms like "hypervelocity impact" and "spacecraft break-up" as though he investigates such possibilities regularly, which he does. And he is not lacking for work.

Together with a team of space debris specialists located in the Mission Analysis Office at ESA's Operations Centre (ESOC) in Darmstadt, Germany, and in the Space Environments and Effects Section at the agency's Research and Technology Centre (ESTEC) in Noordwijk, Netherlands, Flury is point man for ESA's efforts to study, model and assess the space debris problem and determine how to mitigate risk for current and future missions.

"There have been cases of damage and destruction caused by hypervelocity impacts. Just last week, we had to do an avoidance manoeuvre," says Prof. Flury.

In plain language, space debris is anything Up There that can interfere with a spacecraft — including other spacecraft.

According to Flury, at the end of 2003, there were some 10 000 catalogued debris objects around Earth, comprising:

Artificial debris includes spent satellites, cast off Yo-Yo de-spinners (used to de-spin spacecraft after launch), tools dropped during spacewalks, discarded rocket upper stages and the fragmentary remains of craft that have exploded or otherwise broken up.

There are many thousands more uncatalogued objects larger than 1 cm — perhaps more than 50 000; no one really knows the exact count.

Uncatalogued objects include bits of aluminium slag from solid rocket motor propellant and droplets of Sodium-Potassium coolant that escaped from Russian nuclear-powered reconnaissance satellites when they ejected their reactor cores.

The really dangerous bits are intermediate in size, between 1 and 10 cm. These are hard to detect yet pack a kinetic energy punch sufficient to cause catastrophic damage. One cm is also the maximum size of debris that can be defeated by modern shielding technology; Space Shuttle windscreens have been damaged by flecks of paint as small as 0.3 mm in size travelling at a mere 14 400 kph. The fastest debris, at 50 000 kph, are travelling about 17 times faster than a machine gun bullet.

Since the 1957 launch of Sputnik 1, humanity has been blasting rockets into orbit — and space debris have been accumulating right from the start. Sputnik's upper stage was itself discarded into low Earth orbit.

"At that time, space was empty, so no one was thinking about the problem," says Dr Heiner Klinkrad, one of the debris specialists at ESOC, who also looks after ESA's DISCOS database (Database and Information System Characterising Objects in Space), a catalogue of Earth-orbiting objects and debris.

DISCOS can be used to extract detailed data on all known, tracked objects. These data are used to predict potential collisions with ESA satellites. The database has been painstakingly built up through data supplied by USSPACECOM (US Space Command), which operates dedicated tracking radars, and by several European sources.

Additional information on objects of sub-catalogue size is provided by Germany's FGAN (Research Establishment for Applied Science) radar, in Wachtberg, Germany, and by ESA's own Space Debris Telescope in Tenerife, Spain.

At ESOC, the Mission Analysis team use dedicated software to check for potential collisions between catalogued objects and ESA missions, primarily Envisat and ERS-2. Each morning, a computer automatically issues an email message to operations staff. Human intervention is only required if the risk of collision exceeds a given threshold (currently 1 in 10 000).

In addition to their daily collision avoidance responsibilities, ESOC's space debris team conduct regular research and participate in a number of standardisation bodies related to the space debris problem.

Debris studies are a growing field of space science attracting a lot of interest. Under Flury's chairmanship, ESOC will host the Fourth European Conference on Space Debris, 18-20 April 2005, in Darmstadt.

Typical of the debris impact assessment work done at ESA, Dr Gerhard Drolshagen, at ESA/ESTEC, has analysed micro-debris impacts on the solar arrays used by the Hubble space telescope; the arrays were supplied by ESA and retrieved in March 2002 after more than 8 years in space.

Thousands of impact craters could be seen on the 41-square-metre solar arrays, the biggest were about 8 mm in diameter.

"There were 174 complete penetrations of the 0.7-mm-thick array, with impact craters ranging in size from 3 microns to 8 mm," says Drolshagen.

A chemical analysis of impact crater residue allowed him to distinguish between impacts due to naturally occurring micrometeoroids and those due to artificial space debris.

"From the crater sizes, particle fluxes were derived and compared with predictions from population models for meteoroids and space debris. For most sizes measurements and models, they agree very well," he says. Flury adds that, despite the large volume of impacts, there was no functional degradation of Hubble.

Flury argues quite passionately for an international code of conduct, worldwide-accepted standards, and international regulations or space law to create a comprehensive framework for reducing space debris and boosting spaceflight safety.

The need for a global framework is becoming widely accepted given the uneven results of past efforts by individual space-active nations and the growing environment of dangerous debris that surrounds the Earth.

ESA's policy effort focuses on the Inter-Agency Space Debris Coordination Committee (IADC), comprising space agencies from China, France, Germany, India, Italy, Japan, Ukraine, the UK, the USA, Russia and ESA, as well as the Scientific and Technical Subcommittee of the UN Committee on the Peaceful Use of Outer Space (UNCOPUOS).

"Once upper stages are discarded and satellites are turned off, their mission is over. During the first 30 years of space flight, few operators disposed of their spacecraft in a controlled way. This attitude has gradually changed in the past 20 years", says Klinkrad.

Requirements include limiting debris during normal operations, suppressing deliberate break-up of rockets or payloads, and properly disposing of spacecraft and upper stages, typically by moving them to "graveyard" orbits or by deorbiting them into the atmosphere, where most burn up.

While the overall risk of a destructive impact, i.e. involving debris bigger than 1 cm, remains small, Flury argues for action now to protect scientific and commercial space activity in the future.

"Application of the current voluntary mitigation measures is rather mixed. Debris preventative measures need to be applied now," he said at a recent conference. He would like to see a formal Code of Conduct based on the IADC Guidelines issued by UNCOPUOS as soon as possible.

Look for Part 2 in this series, "Assessing the Risk," to be published in March 2005.

The 4th European Conference on Space Debris will take place at ESOC, Darmstadt, Germany, 18-20 April 2005. For registration, programme and additional information, access the conference link at right above.