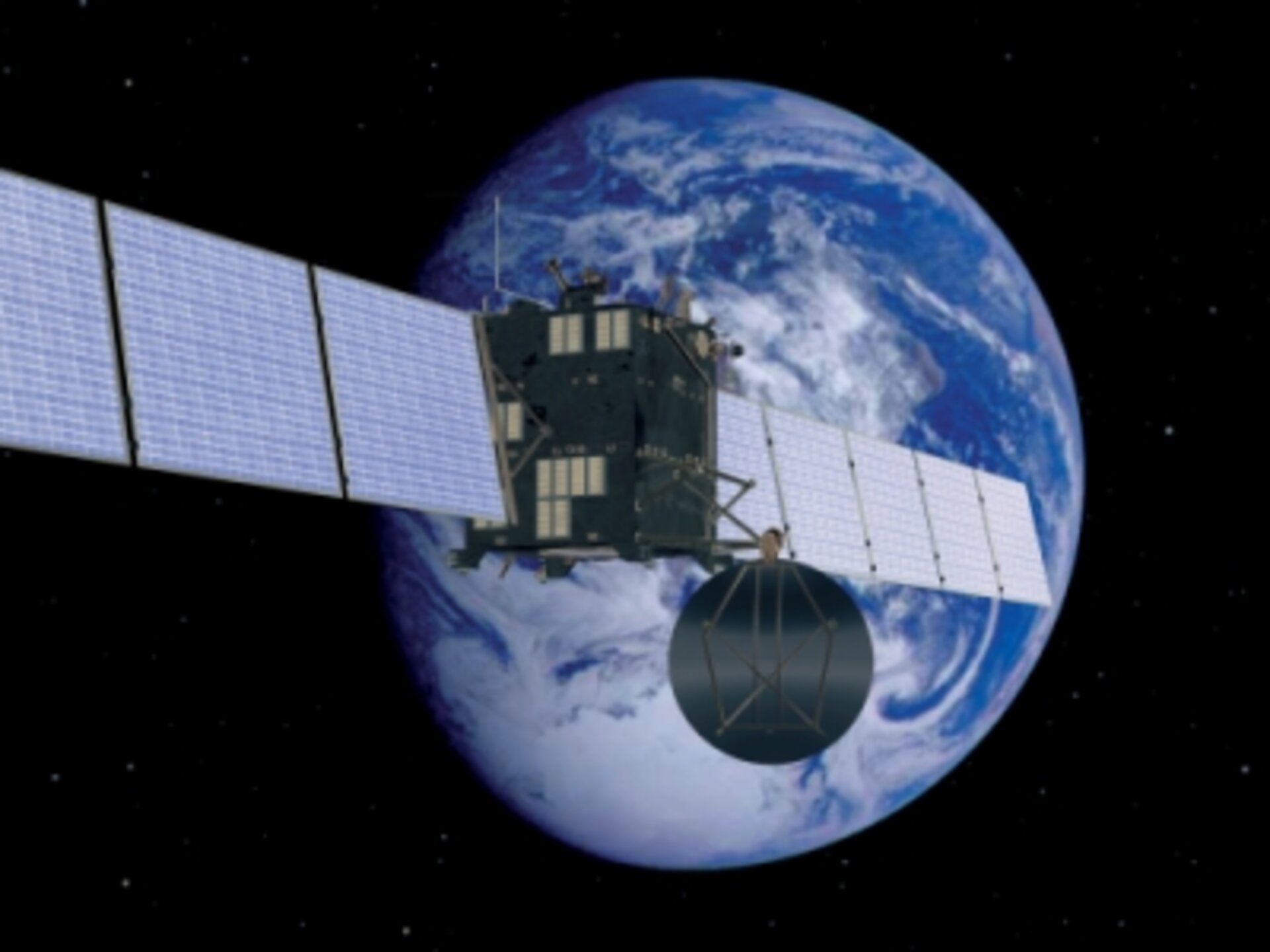 On 18 October at 19:06 CEST (17:06 UTC), Rosetta's thrusters were fired in a planned, 42-second trajectory correction manoeuvre designed to 'fine tune' the comet-chasing spacecraft's approach to Earth. Rosetta is now approaching Earth for the second planetary swing-by of 2007.

After passing Mars in February 2007, Rosetta is now approaching Earth for the second time - the third of four planetary swing-bys that provide fuel-saving gravitational assists enabling the spacecraft to ultimately reach and cross the orbit of comet 64P Churyumov-Gerasimenko in 2014.

Yesterday's trajectory correction manoeuvre began at 18:01 CEST (16:01 UTC) when pre-programmed commands ordered the spacecraft to slew, re-orienting the thrusters in the correct direction. The thrusters were switched on starting at 19:06 CEST (17:06 UTC) for 42 seconds, and afterwards the spacecraft slewed back into Earth-pointing mode.

Brief burns now allow us to optimise the orbit and make the swing-by more accurate, saving us a lot of precious fuel later on.

The process took place automatically since the on-board antenna was pointed away from the ground station during the slew and could not receive radio commands; signals from Rosetta were reacquired at ESA's New Norcia deep-space ground station at 20:39 CEST (18:39 UTC).

The burn took place during one of five preplanned slots which are available to mission controllers based on determination of the spacecraft's actual trajectory by flight dynamics and other experts working on the Mission Control Team at ESA's European Space Operations Centre (ESOC), Darmstadt, Germany.

"We have a target trajectory for Earth swing-by and regular orbit determinations allow us to decide when to do a correction manoeuvre. Brief burns now allow us to optimise the orbit and make the swing-by more accurate, saving us a lot of precious fuel later on," said Andrea Accomazzo, Rosetta Spacecraft Operations Manager at ESOC. He confirmed that yesterday's manoeuvre results were as expected.

A second trajectory correction slot, on 1 November, may also be used depending on results of an orbit determination scheduled for 30 October.

[[Web update 1.11.07: Spacecraft Operations Manager A. Accomazzo reports that an orbit determination conducted on 29 Oct confirmed no need for an additional correction manoeuvre in the 1 November slot.]]

The third Earth swing-by - and last of the four - will take place in November 2009.

Significant science: On to Steins

After November's Earth encounter, Rosetta will continue on its journey and next pass Asteroid Steins, providing an excellent opportunity for science investigations. Steins is relatively small, with a diameter of a few kilometres, and Rosetta is predicted to pass by on 5 September 2008 at a distance of just over 1700 km. This encounter will take place at a relatively low speed of about 9 km/sec during Rosetta's first excursion into the asteroid belt.

Rosetta will be ESA's first spacecraft to undertake long-term exploration of a comet at close quarters. The mission consists of a large orbiter, designed to operate for a decade at large distances from the Sun, and a small lander, Philae.

Each of these carries a large suite of scientific experiments designed to complete the most detailed study of a comet ever attempted.

After entering orbit around Comet 67P/Churyumov-Gerasimenko in 2014, the spacecraft will release the lander onto the icy nucleus.

It will then spend the next two years orbiting the comet as it heads toward the Sun. On the way to Comet Churyumov-Gerasimenko, Rosetta has received gravity assists from Earth and Mars, and will fly past two main-belt asteroids – Steins (September 2008) and Lutetia (July 2010).

This is an expanded version of the article appearing today on the ESA Portal.