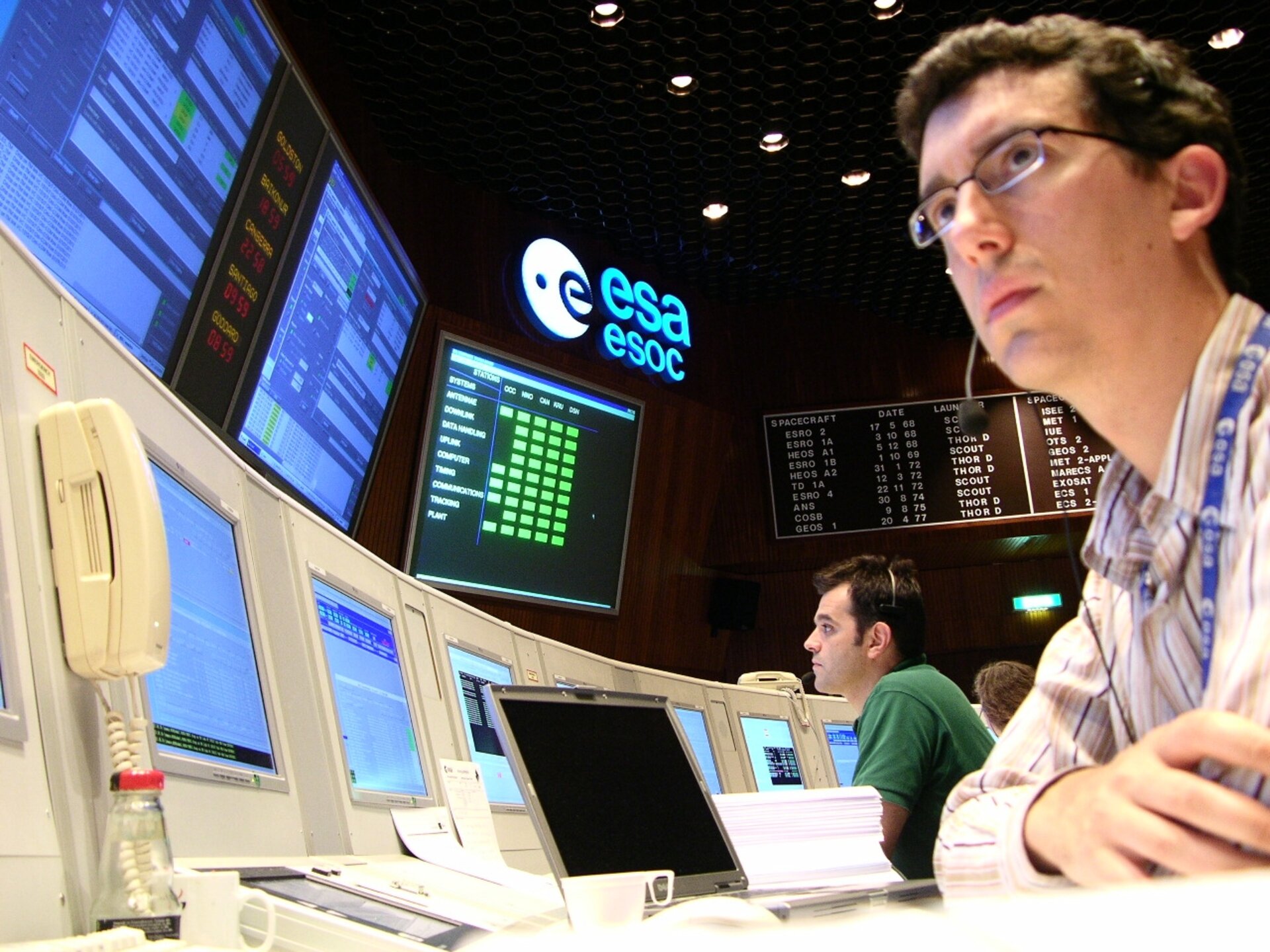 The flight control team is in intensive training for the Venus Express launch on 26 October. Through more than a year of preparation, a group of individual experts has been forged into a pan-European team who trust in each other's skills and abilities.

For the flight control team (FCT), the people who actually fly Venus Express, working on a 220-million-Euro science mission that will travel to Earth's nearest planetary neighbour in record time can be very demanding.

And then there is the lengthy time devoted to repeated simulation sessions, designed to prepare the team for any eventuality during launch and early operations as well as during the routine phase.

But the payback comes in the genesis of a pan-European flight team that works extremely well together and whose members know each other's capabilities.

The Venus Express FCT consists of the Spacecraft Operations Manager (SOM), Andrea Accomazzo, originally from Italy, and 13 engineers, analysts and spacecraft controllers, all of whom work at ESA's Space Operations Centre (ESOC), in Darmstadt, Germany.

The FCT works directly for the Ground Segment Manager and Flight Director, Manfred Warhaut, from Germany, and is supported by numerous ESOC specialists in the areas of flight dynamics, software support and ground stations, among others.

After several years at Fiat Avio, where he helped design the Vega launch vehicle, Andrea joined ESA in 1999, working at ESOC on Rosetta, ESA's comet-chasing mission; Venus Express is his first mission as Spacecraft Operations Manager.

"It's a challenge to build a team. In two years, I have gone from managing myself to managing a team of 13 people. I am happy to say that the team spirit has been pretty good; it has really grown in the past few months as we have become focused on launch," says Andrea.

He adds that the team, "Works hard, but we have fun too. I would say that good team spirit is absolutely essential for reducing tension and stress, particularly during launch, the Launch and Early Operations Phase (LEOP) and Venus Orbit Insertion (VOI)."

'Spacons' in the driver's seat

Working as Spacecraft Controllers, or 'spacons,' the FCT counts Francesca Krueger, Glenn Hurrell and Roland Koehler as some of the more recently joined, junior members who nonetheless bring a great deal of enthusiasm and intensity to the mission.

Francesca, for one, also typifies the complex antecedents of this pan-European team: her father is American and her mother Italian, and she actually grew up in Darmstadt speaking English, German and Italian.

She is also remarkable for having entered the space industry later in her career after earning a degree in computer science in the UK. She previously worked in business in London and Spain.

"It's fantastic to work here. The international environment is tremendous," she says. It's a challenge to get everything organized for the mission, she admits, but the effort is worth it.

Isabelle Dauvin, from a town near Caen in Normandy, France, is also keen on the Venus Express mission, her first.

She joined ESA as a Young Graduate Trainee (YGT) in 2004 after earning physics degrees in France and Canada, and she works as a mission planning engineer.

"I work on the mission planning system to coordinate spacecraft operations with payload activities so that we don't have problems like drawing too much power all at once," she says. "I like my job because I get to learn a little about everything involved with the spacecraft," said Isabelle.

From Giotto to Venus Express

Norbert Schmitt, who, like Krueger, is from the Darmstadt area, is spacecraft analyst for VEX.

He joined the VEX flight team in November 2004 after working on Rosetta and XMM. Norbert is a radio engineer by training and now works on the mission control system software and associated databases.

Ignacio overseas mission-wide activities such as operations readiness, testing, procedures and training; after launch, he'll focus on planning, preparations for VOI and evaluation.

Originally from northern Spain, Ignacio earned degrees at two American universities before working at Motorola on Iridium and, back in Europe, at Vega and Telespazio; he moved to ESOC in 2001 where he worked on Rosetta.

"VEX is a very fast mission. We'll be at Venus in just a few months. The word 'express' in 'Venus Express' is very appropriate," he says, referring to the shortened time it has taken to prepare and launch the mission.

His German colleague Peter Schmitz serves as Deputy SOM and will head up the "B" team when the FCT is split into two teams to provide 24-hour-per-day manning in ESOC's Main Control Room during the immediate post-launch LEOP phase.

Peter is also responsible for overseeing flight-related issues for the Venus Monitoring Camera (VMC), and he is planning the Moon observation campaign, due to occur 14 days after launch. "Every FCT engineer has at least one or two payload instruments to look after. Overall, this work is very interesting and a challenge due to the short time frames involved," he says.

Peter started at ESA in 2000 after a stint as a YGT, and VEX will mark his fourth launch campaign after Ulysses, Mars Express and Rosetta.

The VEX team, which includes five other engineers, clearly benefits from a great deal of collective experience with Rosetta and Mars Express, two sister missions with which Venus Express shares many commonalities including some hardware, software and basic spacecraft architectures.

Not only does this ultimately save money, but the reuse of experience gives the flight team an invaluable edge.

It also shows that, for some, flying space missions is in their blood.

"I think the most important thing is that space operations have to be a genuine passion," says SOM Accomazzo. "Development times are relatively long compared to other fields and this can sometimes lead to frustration or to the feeling that you never get there. If you aren't really motivated, it can be hard."