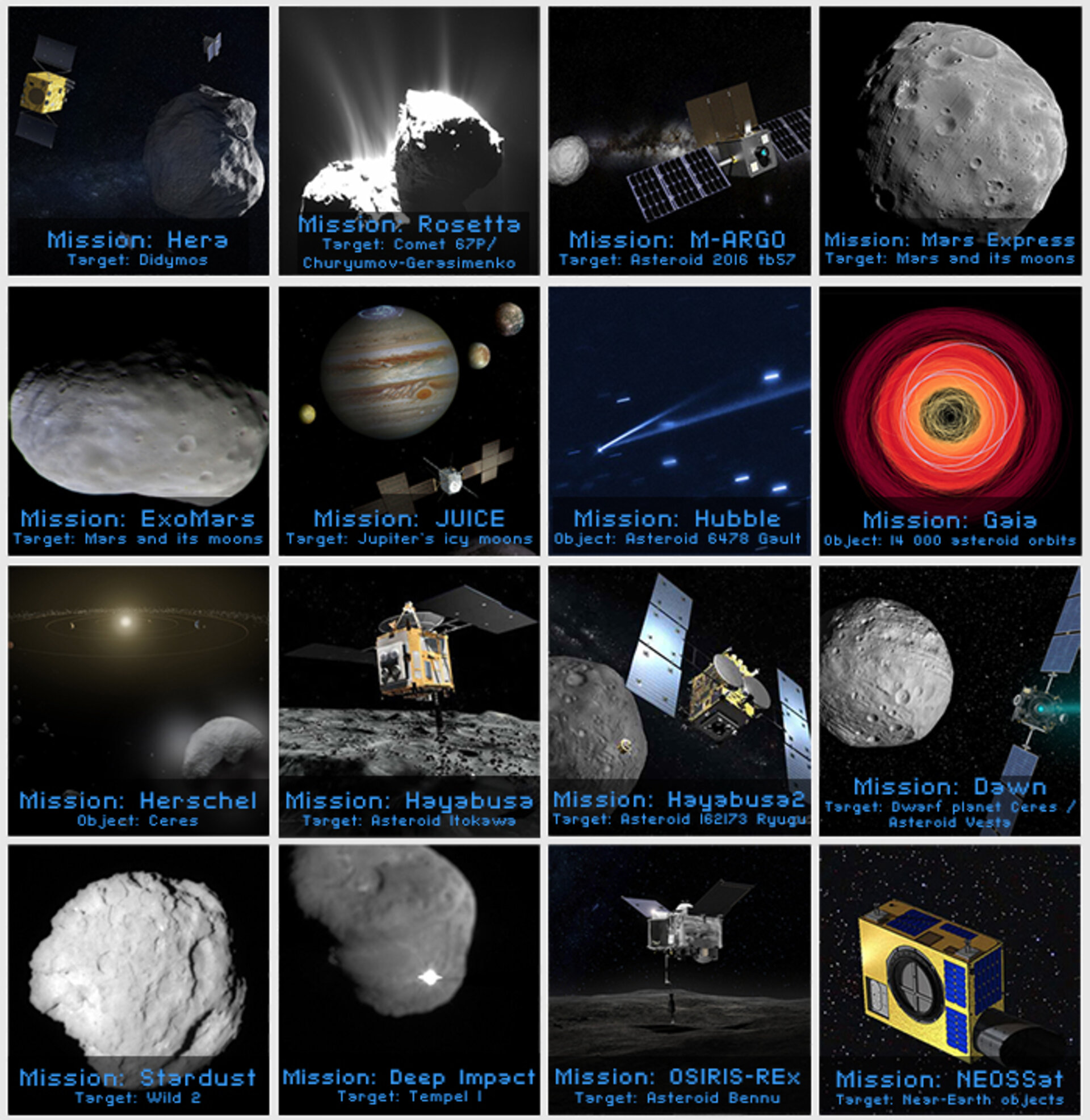 We have learned a lot from visiting the Moon, and even more from visiting other planets, but what about the thousands of other small objects that share our Solar System? Space agencies have sent several spacecraft to asteroids, comets, dwarf planets and small moons, and have ambitious plans to send more in the future.

Asteroids and comets are believed to be leftover debris from the formation of the Solar System, meaning they can help trace its history. What’s more, these objects may have played a vital role in the development of our planet and terrestrial life by colliding with Earth in catastrophic impact events, bringing life-sparking organic compounds. Such collisions were more common in the early Solar System, but small objects can still impact Earth, damaging life, nature and infrastructure.

Such objects may also have brought organic matter to other planets and moons, some of which – Jupiter’s moon Europa or Saturn’s moon Enceladus, for example – may possess the right conditions for hosting some form of life. For all these reasons, and many more, it is important to study these objects and find out more about them.

Asteroids and comets whose orbits come close to or even cross that of Earth are known as near-Earth objects (NEOs), and they can pose an impact threat. To mitigate this threat, the first step is to search for NEOs and map their orbits. Discovery & Preparation supported a study that explored using star trackers – already on board many spacecraft for orientation calculation – to search for NEOs.

Another challenge we face from extraterrestrial objects is that dust on their surfaces may affect visiting spacecraft, landers and astronauts. The Dusty Plasma Environments study was the first step in developing a set of models that could assess the effects of dusty plasma on future exploration units.

Recent exploration probes and rovers host mini laboratories for in-situ research, but sophisticated laboratories on Earth can perform even more advanced tests. One Discovery & Preparation study explored how to set up a facility on Earth that could safely handle such precious and potentially hazardous samples that were brought back from these space rocks. The investigation was based on previous Mars sample return facility studies.

Another study explored how to land safely on a low-gravity object. It was carried out primarily by the German Aerospace Centre (DLR), who developed the MASCOT lander for the Japanese Hayabusa2 asteroid mission. The study looked into developing a second lander, MASCOT-2, designed to land on Dimorphos (previously known as Didymoon) – one half of the double asteroid target of ESA’s Hera mission.

Due to be launched in 2024, Hera is one of Discovery & Preparation’s great success stories. The mission design was possible thanks to numerous studies, many of which are highlighted in the timeline below.

Hera will host two CubeSats that will be able to get closer to Dimorphos, whilst Hera examines the aftermath of the impact of NASA's DART spacecraft on Dimorphos' larger partner, Didymos. Being versatile, small and relatively cheap, many Discovery & Preparation studies have investigated how CubeSats could be used to explore smaller space objects. Several of these studies focused specifically on Hera’s companions.

Once we’ve found out more about asteroids, comets and moons, we may start thinking about using the rich diversity of material we find there as energy sources or a means to sustain human life as we venture deeper into space. A recent Discovery & Preparation study compiled a list of potential space resource utilisation missions, performed preliminary risk analyses and proposed a risk assessment methodology. A very forward-thinking study even explored how astronauts could use ESA’s Neutral Buoyancy Facility to train for trips to these interplanetary objects, where gravity would be present but very weak. More Discovery & Preparation activities focusing on asteroids, comets and moons can be found in the Nebula Library of studies.

ESA also made history by orbiting a comet with the Rosetta mission. Remaining with Comet 67P/ Churyumov-Gerasimenko for over two years, Rosetta found out a plethora of information about periodic comets, and even released a lander to get closer to the surface of this mysterious object.

Next, ESA has its eyes on an asteroid. The Agency is working with GomSpace Luxembourg to design the first ever nanosatellite to rendezvous with an asteroid. Due to launch in 2023, the Miniaturised Asteroid Remote Geophysical Observer (M-ARGO) will be a 12-unit CubeSat with its own propulsion system. This is being funded though ESA’s General Support Technology Programme (GSTP), which is also supporting updates to a tool that will support future ESA lander missions by modelling surfaces of small bodies in our Solar System and providing photo-realistic images.

ESA is already involved in asteroid research, through testing three grains of rock brought back from asteroid Itokawa by Japan’s Hayabusa mission. This is contributing to our knowledge about the surface environment of asteroids, including offering insight into how the surface of asteroid Didymos will respond to impact.

Planetary missions are also contributing to our understanding of extraterrestrial objects. Whilst orbiting Mars with Mars Express and the ExoMars Trace Gas Orbiter, ESA observed Mars’ moons, Phobos and Deimos. Moving further afield, The JUpiter ICy moons Explorer (JUICE) mission will investigated three of Jupiter’s largest moons – Ganymede, Europa and Callisto – to determine whether any of them may be habitable.

But we don’t necessarily need to get close to these objects to learn about them. ESA’s space telescopes, including Hubble, have photographed numerous small bodies throughout the Solar System to discover more about their characteristics and orbits. Hubble recently captured an image of a rare self-destructing asteroid, Gaia collected information on more than 14 000 asteroids, Herschel discovered water vapour around dwarf planet Ceres, and the Infrared Space Observatory discovered twice as many asteroids as were previously believed to exist.

Aside from landing on two different asteroids with their Hayabusa and Hayabusa2 missions, JAXA is currently planning a mission to survey Mars’ two moons: Phobos and Deimos. The mission, Martian Moons eXploration (MMX), even plans to collect a sample from one of the moons and bring it back to Earth.

NASA has also visited extraterrestrial objects in the past, with the Dawn mission being the first to orbit a dwarf planet – Ceres – and also visiting the biggest asteroid in the Asteroid Belt, VESTA. Dawn discovered that Ceres was previously an ocean world and found organic material. It also confirmed that Vesta is the source of many meteorites found on Earth.

The US Stardust mission collected dust from comet Wild-2, which indicated that comets may have formed very differently than was originally believed. Deep Impact also visited a comet – Temple 1, crashing an impactor into the comet’s surface to expose materials such as water ice and organic matter. These results suggest that comets may have played an essential role in the initiation of life on Earth.

Right now, NASA’s OSIRIS-REx spacecraft is orbiting an NEO. OSIRIS-REx plans to bring back a sample to Earth to support investigations into how planets formed and life began. The Canadian Space Agency (CSA) participated in OSIRIS-Rex by providing an instrument that is mapping the asteroid’s surface, allowing scientists to select a suitable sample site. CSA also developed the Near-Earth Object Surveillance Satellite (NEOSSat), dedicated to detecting and tracking asteroids that may someday pass close to Earth.

And it’s not only space agencies that are involved in finding out more about NEOs – the European Southern Observatory (ESO) also dedicates time to this cause. In 2019, ESO’s Very Large Telescope imaged a double asteroid that came close to Earth. This provided a good opportunity to rehearse how space organisations would work together if a hazardous NEO ever threatened Earth directly. The project was coordinated by the International Asteroid Warning Network (IAWN), a collaboration between many space organisations aiming to protect Earth from NEOs.