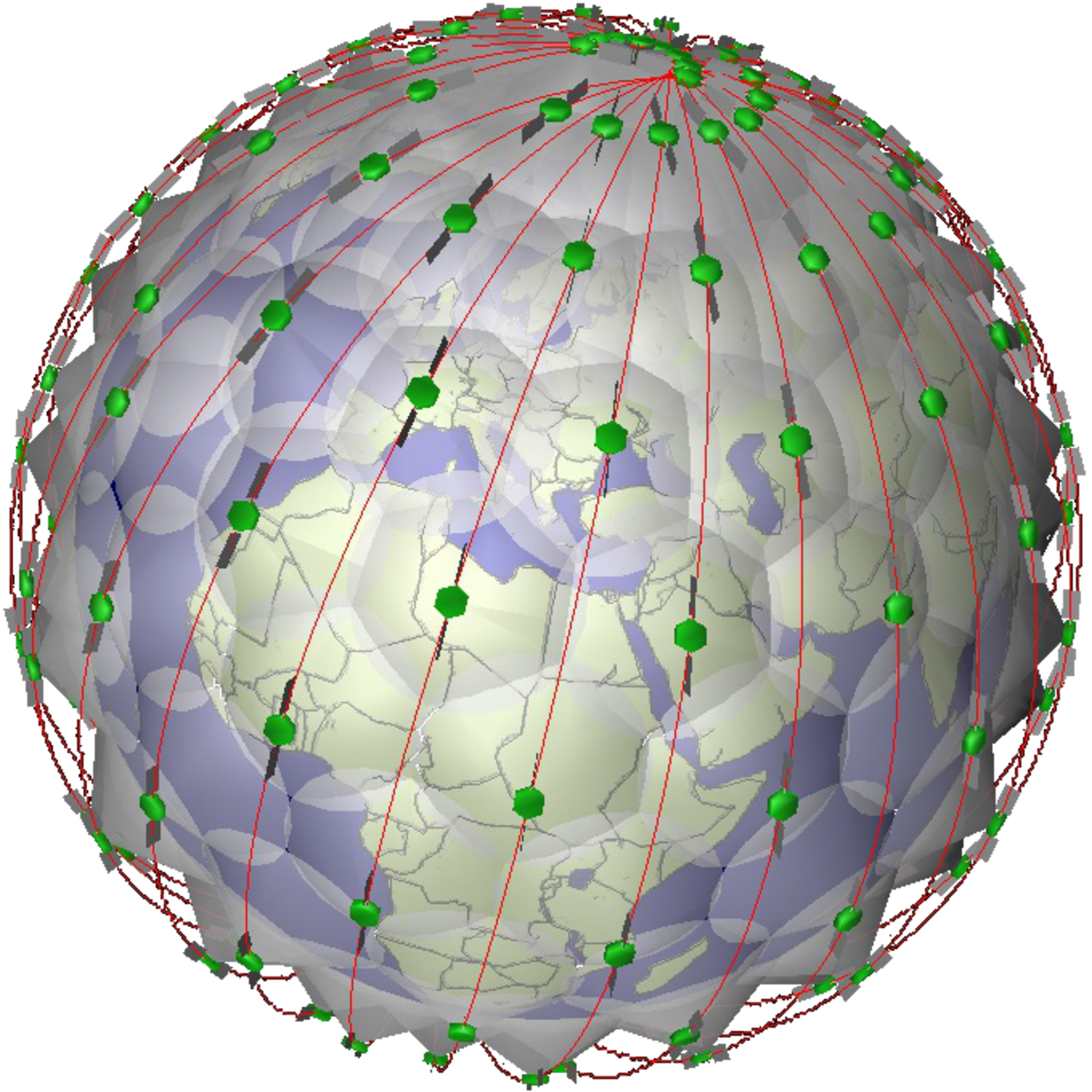 Satellite mega-constellations consisting of hundreds to thousands of spacecraft are becoming a popular solution for global telecommunications coverage. In 2017, researchers were invited through the Discovery element of ESA’s Basic Activities to study how to avoid collisions between mega-constellation satellites, and how to deal with end-of-life spacecraft to minimise space debris. Two teams reacted and recently presented their findings at ESTEC.

Just like cars drive along designated roads, satellites move along fixed orbits, some of which are more popular than others. And like roads on Earth, these space highways are becoming increasingly congested with operational spacecraft, dead spacecraft and space debris, increasing the likelihood of collisions.

With the amount of space debris on the rise, the United Nations has set out guidelines to reduce it. The ESA Space Debris Office has been key in defining these guidelines and is also responsible for their implementation within ESA. ESA has set up a specific programme — Clean Space — which explores how to keep Earth’s orbital environment as debris-free as possible and which pioneers an eco-friendly approach to space activities.

Over the next decades, many companies and organisations plan to launch mega-constellations of telecommunications satellites. These huge formations would orbit around Earth, relatively close to the surface, in an area of space that is already highly congested. Collision avoidance manoeuvres and space debris mitigation efforts, requiring new technologies and procedures to be developed, are becoming more urgent.

Two ESA-led teams of researchers carried out investigations as part of this endeavour. The MEGACO study, consisting of representatives from Airbus, Braunschweig Technical University and École polytechnique fédérale de Lausanne, set out to understand the complexity of mega-constellations in general, including a focus on collision avoidance and dealing with satellites that have reached the end of their lives. Meanwhile, a team from Thales Alenia Space explored two specific methods of removing debris, including failed satellites, from orbit.

The MEGACO team investigated three theoretical mega-constellations. For each one, they analysed the space and ground infrastructure required to operate the constellation, assessed different end-of-life strategies, looked at collision avoidance requirements, and investigated associated costs and risks.

"One aim of MEGACO was to design a set of spacecraft that can deorbit themselves, and to figure out what to do with failing spacecraft,” explains Kate Symonds, systems engineer responsible for the MEGACO study on ESA’s side.

The team selected one mega-constellation concept for further study and looked at more specific operational requirements.

“Our final investigations included exploring having spare satellites, carefully controlling launches and orbits to avoid collision, and using ‘shepherd satellites’ – in the same plane but in a lower orbit – that capture dead spacecraft and deorbit them,” Symonds continues. “This research will feed into future ESA studies on mega-constellations.”

“Without ADR, a failed spacecraft can remain in orbit for hundreds of years,” explains Robin Biesbroek, the ESA systems engineer overseeing the project. “This could affect other spacecraft in that orbit and result in lots of debris and many collisions.”

Similar to MEGACO’s shepherd satellite idea, the first ADR design includes a chaser satellite containing capture equipment that is launched with the rest of the constellation. When a spacecraft fails, the chaser captures it using a net and both spacecraft re-enter Earth’s atmosphere and burn up.

The other design puts three ADR spacecraft into space at once in a dedicated launch. Each spacecraft uses a robotic arm to capture and de-orbit at least 35 pieces of debris, one after another, before completely burning up on re-entry.

“Both techniques are viable options for Active Debris Removal, with the second being especially effective at removing a lot of debris,” Biesbroek concludes.

These two studies present exciting ideas for dealing with end-of-life mega-constellation spacecraft, and they will feed into new research by Clean Space, which continues to develop technologies required for ADR and collision avoidance.

Clean Space is currently developing a dedicated ADR mission called e.Deorbit, which would target a derelict satellite in low-Earth orbit, capture it, then safely burn it up in a controlled atmospheric re-entry. This first mission will act as a pioneer, paving the way for all future Space Servicing Vehicles, which will offer a broad range of services such as life-extension (e.g. refuelling), assembly-in-orbit, inspection of other satellites, and the removal of debris.