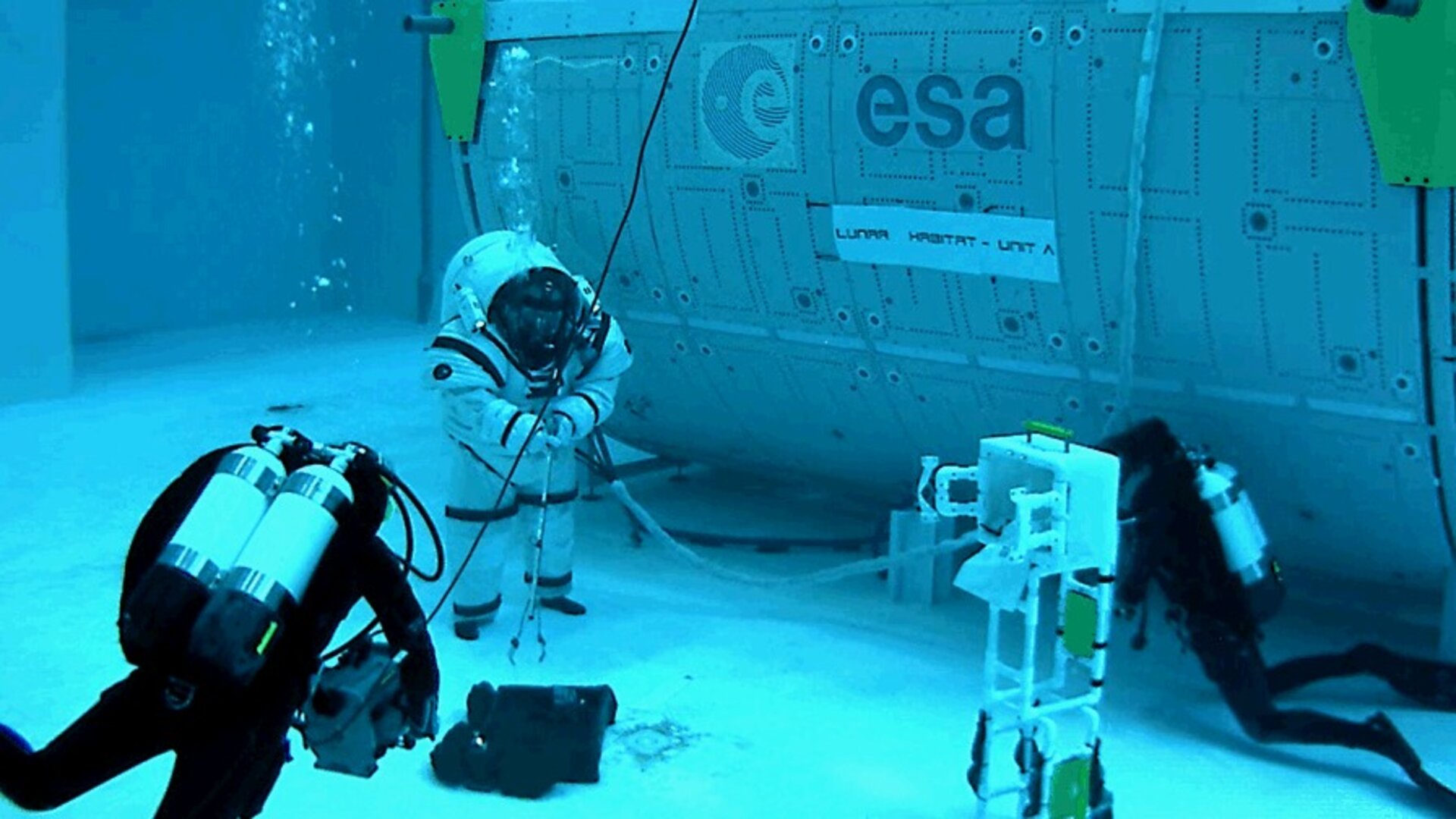 It’s one of the deepest ‘swimming pools’ in Europe, but for three years has been helping preparations for a human return to the Moon. ESA’s Neutral Buoyancy Facility at the European Astronaut Centre has been the site of the ‘Moondive’ study, using specially weighted spacesuits to simulate lunar gravity, which is just one sixth that of Earth.

The three-year study took place in the Centre’s 10-m deep Neutral Buoyancy Facility (NBF) near Cologne in Germany. This is one of four such immersion tanks worldwide – the others are in the United States, China and Russia – and is used to train astronauts for ‘extra vehicular activity’ (EVA), also known as spacewalks.

With International Space Station operations moving towards an international lunar return in the late 2020s, ESA’s NBF has been used to investigate moonwalk procedures for the lunar surface.

Hervé Stevenin, ESA’s Head of EVA Training and NBF Operations at the European Astronaut Centre (EAC), explains: “The beauty of the water immersion in the ESA-NBF is that we can simulate not only long-duration weightlessness but also partial gravity, such as on the Moon or Mars, by fine-tuning the negative buoyancy of the astronauts and all of the equipment they use.”

Moondive was run by a consortium led by the French company, Comex, which specialises in human and robotic exploration of extreme environments.

“We wanted to assess how the NBF could be adapted to enable tests of EVA equipment, tools and operational concepts in simulated Moon gravity,” states Peter Weiss, Head of the Space Department at Comex.

“We focused on the techniques and technology we will need to prepare astronauts for future missions to the Moon. The idea was to come up with a database of items, tools and tasks that astronauts may have to handle on missions to the Moon, not just for training purposes but also for testing and validating new equipment and ways of doing things.” 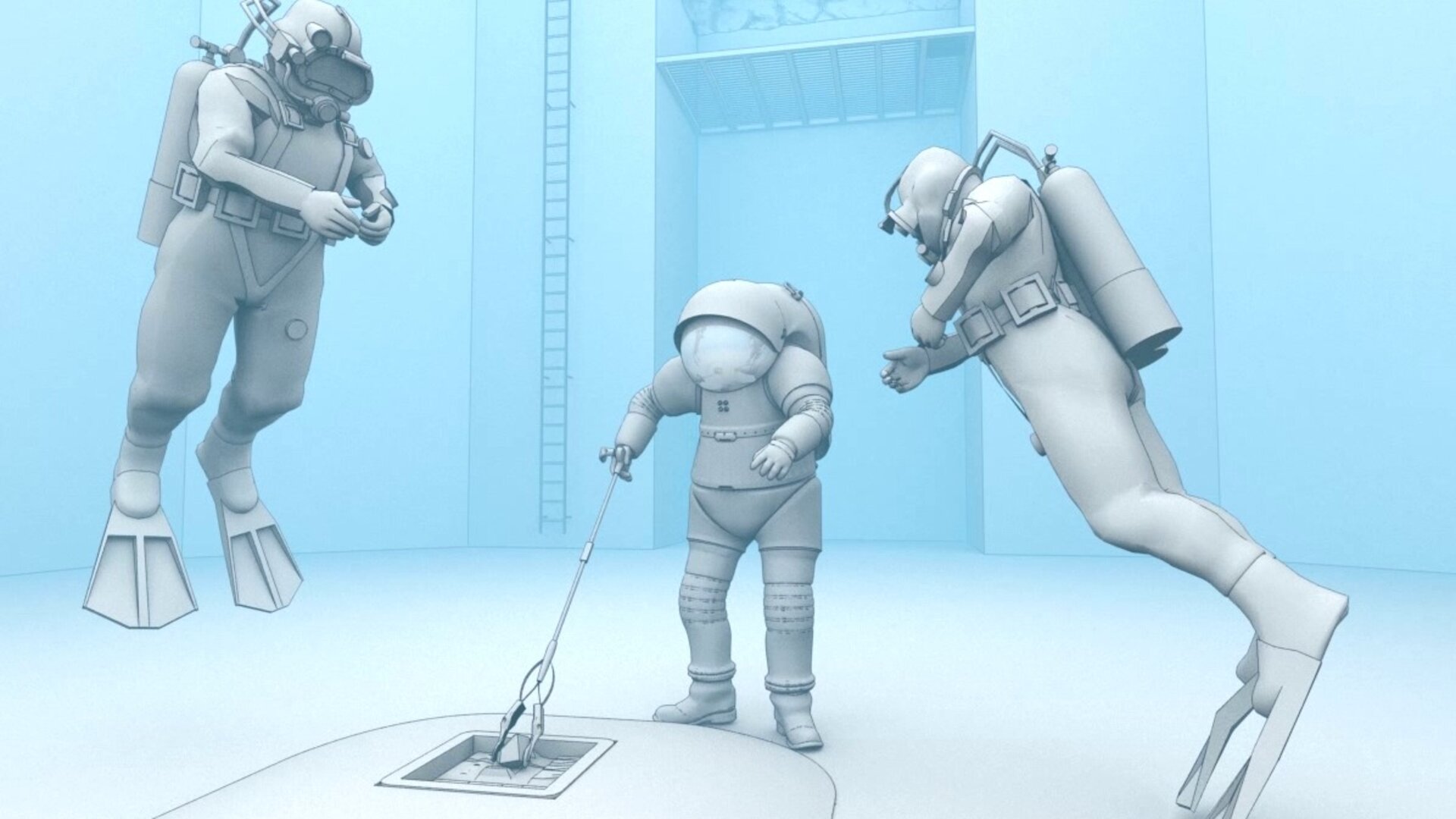 The Space Applications Services company studied the Apollo missions from the 1960s and 1970s as well as the requirements expected for future Moon exploration. The team listed the most important tasks and tools as a starting point for what they would need to do in the NBF.

“The Moondive study has been very successful,” adds Dr Weiss, “leading to the first ESA spacewalk simulation ever in partial gravity within the NBF. We used an exoskeleton reproducing the bulkiness and movement limitation of a pressurised spacesuit, and then performed tests of lunar surface geological sampling at the bottom of the ESA water tank.”

“It’s really amazing to experience for yourself something this generation has only seen on video pictures,” says Hervé, “how the optimum walking strategy in this finely-tuned negative buoyancy turns out to be to kangaroo jump, just like the Apollo astronauts did on the Moon.”

The updated NBF joins a range of ESA simulators, training software and hardware and EAC’s Luna Dome – currently in preparation, designed to simulate the effects of lunar dust on equipment and hardware – placing Europe in the forefront of testing and training facilities for the human exploration of the Moon.

The Moondive project was supported through ESA’s Basic Activities.