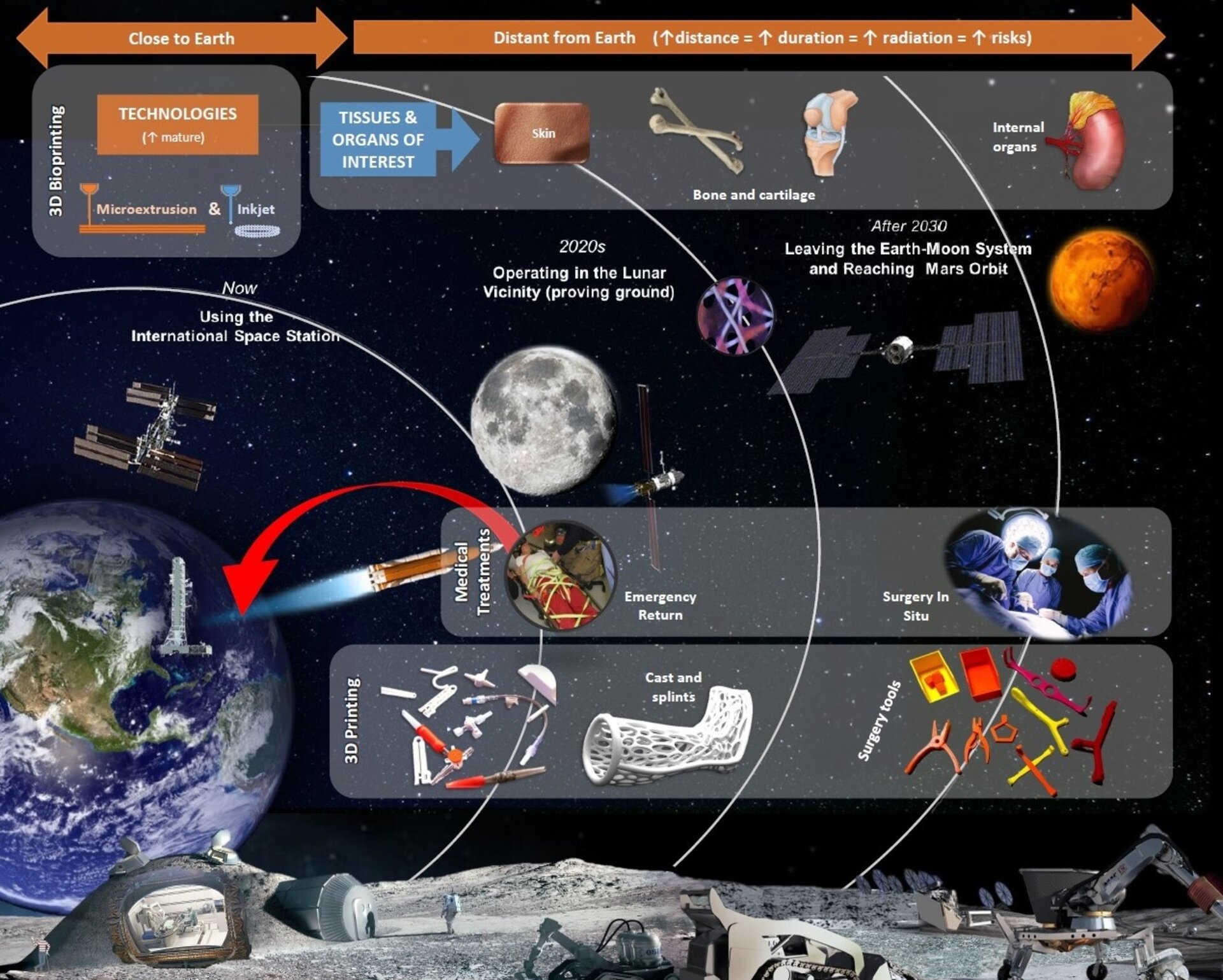 Astronauts venturing deep into space could receive medical treatments using 3D-printed skin, bone and – one day – entire organs, according to a leading group of 3D bioprinting experts who gathered at ESA’s technical heart.

The Apollo astronauts on approximately 12-day trips to the Moon took a small medical bag whose contents included bandages, antibiotics and aspirin. Future space travellers isolated for months or years away from Earth will require much greater and more flexible medical support.

An ESA-led project is investigating the use of 3D bioprinting to support medical treatment of long-duration space expeditions and planetary settlements. Leading experts from the field met at ESA’s ESTEC centre in Noordwijk, the Netherlands for a two-day workshop.

In the same way as standard 3D printers use plastics or metals to construct three-dimensional objects, 3D bioprinters use ‘bio-inks’ based on human cells, and the nutrients and materials needed to regrow body tissue such as skin, bone and cartilage. Temporary ‘scaffolds’ can be printed at the same time to provide stability and the optimum physical conditions to promote reconstruction.

Printing entire organs is a next-decade goal, but involves the precise combination of multiple cell and tissue types to work together as one.

Workshop participants discussed the current status of 3D bioprinting, and the work still to be done to advance the practice from lab research to the point where it can help both terrestrial and astronaut patients – which include regulatory as well as medical and technological challenges.

“For the first time in Europe, all the relevant experts have come together to discuss applying 3D bioprinting and regenerative medicine for space,” said Tommaso Ghidini, head of ESA’s Structures, Mechanisms and Materials Division, overseeing the project.

“We’re asking what astronauts would need in the short, medium and long term, and what steps are needed to mature 3D bioprinting to a level where it can be useful in space. We’re defining a development roadmap and timeline, with the aim that this group becomes a scientific working group in future, pushing progress on.”

Astronauts at risk from flying farther

“In the event of a medical emergency a rapid return home will not be feasible. Instead, patients will have to be treated on the spot. Thus we are evaluating the feasibility and added value of implementing different 3D printing technologies and bioprinted tissues into future exploration missions.”

In addition, a broad range of medical issues needs to be considered – the 3D bioprinting experts have been guided by a previous ESA ‘HUMEX’ study.

The weakened bones and muscles current astronauts contend with in weightlessness – tackled in part through exercise and medical countermeasures – might be made more serious still by spending years rather than months in orbit. Life in the partial gravity of other planets might be little better, increasing the risk of bone and joint damage as well as skin injuries from slips and accidents. And simply venturing beyond Earth’s protection magnetic shield involves higher radiation exposure, and consequent cancer risk.

Preparing for all eventualities is simply not possible aboard a cramped spacecraft. Instead, a 3D bioprinting capability would allow a more flexible, versatile response to emergencies.

Today, for instance, serious burn injuries are typically treated using skin grafts from elsewhere on a patient’s body. This involves a secondary injury to the transplanted area, far from ideal when research shows that the orbital environment makes wounds harder to heal. Instead, new skin could be grown and bioprinted from the patient’s own cells, then transplanted directly.

Or, in the case of cancer, the option of printing replacement tissue in a customised shape to directly replace a cancer-affected part of the body – be it skin, bone or an internal organ – is opening up treatment options not only for space exploration but also back on Earth.

“Another unknown is how bioprinted constructs will mature after printing and how their implementation in the human body will be affected by the altered conditions of space,” said Prof. Michael Gelinsky, Head of the Center for Translational Bone, Joint and Soft Tissue Research at the University Hospital of Dresden Technical University.

“The surgery required to transplant printed tissues also requires a rethink. The sterile environment, equipment and trained personnel of a terrestrial operating theatre may not be available, as well as the single-use surgical items employed casually on the ground.”

Beyond the technological hurdles, participants stressed the legal and regulatory issues involved. Transplanting bioprinted tissues and organs into human patients would have to be cleared in advance not only by space-related regulatory boards, but first health regulatory boards on the ground.

The 3D Printing of Living Tissue for Space Exploration project is supported through ESA Basic Activites within the Discovery and Preparation element, and led by OHB System in Germany in cooperation with Dresden University of Technology in Germany.